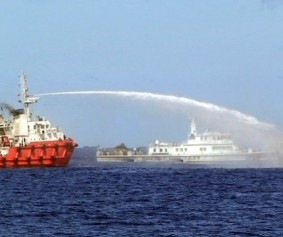 From ACD — South China Sea Territorial Disputes – J. Millard Burr – Thousands of workers took to the streets to demonstrate against “Chinese oil drilling in a contested area of the South China Sea.”… It is with bittersweet recall that I read and re-read the Reuters article which described the damage done to Chinese businesses by a mob of 19,000 Vietnamese workers.  It seems that Vietnamese dudgeon was touched-off by China’s recent announcement that it would begin drilling for oil in the South China Sea waters claimed by Viet Nam.…more….

Jihadis Returning/Redeploying from Syria – Rachel Ehrenfeld – Several years and many thousands of jihad fighters from at least 70 countries joining the Syrian blood-bath has finally raised the alarm that Syria has replaced Afghanistan as the new training ground for al Qaeda and its like…Some in the West attribute the growing wave of jihadis departing from Syria to infighting. By now, it should have been realized that such struggles only serve whichever side to recruit new members to their fight. Since Islam is the religion of perpetual interpretations, different elements pull in different directions that cause everlasting fighting. Arab/Muslim countries that provide the vast majority of jihadis…more…

Putin’s Regime and the Russians – Rachel Ehrenfeld –  How the U.S. could have ended up with a 21st-century foreign policy that openly rejects the idea that regime character is important is almost unfathomable given the events we have experienced and witnessed over the past 20 years. Vladimir Putin and Russia have provided the latest lesson about regime character.  Hundreds of thousands of words have been written trying to ferret out Putin’s motivations.  Most are riddled with expressions of disbelief that the Russian people support him. But most Russians’ acceptance of Moscow’s domestic propaganda and outright lie-telling is nothing new…more…

Putin, Bluffer-in-Chief – Sol W. Sanders – The current extremely successful campaign of aggression by Russia’s dictator-candidate Vladimir Putin illustrates two of the fundamentals of geopolitical history: * A demagogue’s capability of achieving remarkable results through bluff.* How history often turns on relatively small margins only later to be dis-remembered. Putin, with a home front in near crisis, has nevertheless won an important strategic victory by his covert invasion of the Crimea and wresting it, at least temporarily, from Ukraine. The disarray in Kiev after an unbelievably corrupt regime was dismembered by a popular street revolt has facilitated his pretense of superior power…more…

“No Place to Hide — A Must Read Review – Michael B. Mukasey – “Glenn Greenwald believes the government’s goal is the elimination of electronic privacy worldwide.” In a 1964 essay, Richard Hofstadter described what he called “the paranoid style” in American politics, a mode of analysis and rhetoric employed by insiders who feel threatened by change or outsiders who feel frustrated that they cannot cause change. “It is the use of paranoid modes of expression by more or less normal people,” Hofstadter noted, “that makes the phenomenon significant.” So it is with this book by Glenn Greenwald, a lawyer turned journalist who has achieved celebrity as the principal disseminator of the classified material that Edward Snowden stole…more…

Syria: The Islamic State of Iraq and al-Sham and the “Cleansing” of Deir ez-Zour – Valerie Szybala – Following the January 2014 uprising by rebel groups in Syria against the Islamic State of Iraq and al-Sham (ISIS), ISIS contracted its footprint in Syria. The group was pushed out, tactically withdrew, or went below the radar in cities and towns across much of Idlib, Aleppo, and Deir ez-Zour. It continued to battle the Kurds in Hasaka, but constituted most of its strength in ar-Raqqa…more…

How to Hit Putin Where It Hurts: Russia needs a $117 per barrel price of oil to balance its budget. Let’s aim for $60 – Jim Woolsey, Anne Korin

Interview with Gal Luft on the Impact of Russia, Ukraine and American LNG on European energy security – Natural Gas Europe – Gal Luft is a member of ACD Board of Advisors

Russian History Is on Our Side: Putin Will Surely Screw Himself. So the international sanctions aren’t working — don’t worry! If 1,000 years of Russian screw-ups are anything to go by, it won’t be long before Vladimir Putin brings himself down. – P.J. O’Rourke

An Unfair Broker for Ukraine — A Swiss diplomat with a history of ‘freelancing’ draws U.S. and Western ire. – Sohrab Ahmari

The White House Says the Peace Process Is Never Over–But Neither Is the Conflict — The break in negotiations with Ramallah means Netanyahu can focus on the other permanent threat: Iran – Lee Smith

Wars Within Wars. In northern Syria, the Kurds try to carve out a territory and fend off the jihadists – Jonathan Spyer

ADL Polls Anti-Semitism in Over 100 Countries on An Finds More Than One-Quarter of Those Surveyed Infected With Anti-Semitic Attitudes. Only 54 Percent of Respondents Have Heard of the Holocaust – ADL

Dancing with a dragon: China’s economy is moving in directions favorable for Israel, but its conduct is problematic – Dr. Norman Bailey

Angling to Be the MasterCard of Bitcoin — The 31-year-old CEO of Coinbase on his plan to become the world payment processor for the virtual currency. Could this be the end of credit cards? – Andy Kessler

BIOLOGICAL DEFENSE: DOD Has Strengthened Coordination on Medical Countermeasures but Can Improve Its Process for Threat Prioritization – GAO-14-442: Published: May 15, 2014.