“No Place to Hide”- A Must Read Review 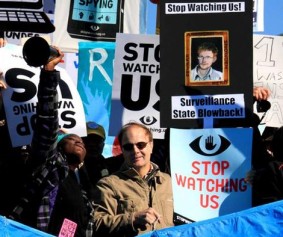 ‘Glenn Greenwald believes the government’s goal is the ‘elimination of electronic privacy worldwide.’

In a 1964 essay, Richard Hofstadter described what he called “the paranoid style” in American politics, a mode of analysis and rhetoric employed by insiders who feel threatened by change or outsiders who feel frustrated that they cannot cause change. “It is the use of paranoid modes of expression by more or less normal people,” Hofstadter noted, “that makes the phenomenon significant.”

So it is with this book by Glenn Greenwald, a lawyer turned journalist who has achieved celebrity as the principal disseminator of the classified material that Edward Snowden stole while employed as a communications technician by a subcontractor to the National Security Agency. Part memoir, part political tract, “No Place to Hide” is Mr. Greenwald’s account of how he came to meet and work with Mr. Snowden; of the classified electronic intelligence-gathering programs used by the U.S. and its allies that he and Mr. Snowden chose to disclose; and of why these programs are a threat to us and our institutions and their disclosure therefore a good and necessary thing.

The story in the book of Mr. Greenwald’s contacts and conversations with Mr. Snowden and others may very well be true; I have no basis to question it. And Mr. Greenwald’s political arguments are, of course, open to debate. But his portrait of the nature and goals of the NSA programs is simply false. He presents them as an attempt to achieve mass obedience and maintain power in the hands of an elite through the actual and perceived ability to monitor all electronic communications—voice, email, you name it. The claim is ridiculous on its face because you can’t cow people into submission with a monitoring program that you don’t disclose.

Boiled down to their essences, the programs Mr. Greenwald discusses are two. One involves the gathering of the telephone metadata of all calls into and within the U.S: the numbers of caller and called, the date, time and length of the call. The content of the call and the identities of the participants are not recorded. The resulting database is searched only to determine if a suspicious phone number overseas—one likely to belong to a terrorist suspect—has called or been called by a number in the U.S. The database may be searched only for that purpose and only by fewer than 30 total employees among the NSA’s many thousands. It may not be data mined or mapped, as Mr. Greenwald suggests, to create a profile of what calls have been made by a number in the U.S.

The other program authorizes the gathering of communications between non-U.S. citizens abroad for intelligence reasons, including counter-terrorism, counter-proliferation and assessing the diplomatic posture of foreign countries with respect to issues that affect the interests of the U.S.—a purpose for which foreign countries gather whatever information they can, both from us and from one another.

Adherence to these restrictions is overseen not only by the superiors of NSA employees within the executive branch but also by Congress and the Foreign Intelligence Surveillance Court, which mandated the restrictions and to which any deviation must be and is reported—that is, all the branches of government, what former NSA and CIA Director Michael Hayden has called the “Madisonian trifecta.”

To Mr. Greenwald, however, these programs do not reflect our government’s concern with the safety of its people or the use of means employed by all nations to protect legitimate interests. Rather, they show the U.S. government’s desire for the “complete elimination of electronic privacy worldwide.”

The “evidence” he adduces to support this apocalyptic vision richly deserves the mockery of inverted double commas. A typical sample is the Power Point slide he prints from a 2011 meeting of the “Five Eyes” alliance—the U.S., Australia, New Zealand, Canada and the U.K.—which contains an ominous set of steps including “Sniff It All,” “Know It All” and “Collect It All.” But this is not the blueprint for some plot to take over the world. It is apparently from what is known as a “Signals Development” conference discussing what to do when you secure a major new source of electronic intelligence so that the wheat of useful information can be separated from the chaff of irrelevant communications.

Behind the government’s supposed effort to eliminate privacy, Mr. Greenwald sees a darker purpose: global mind control. He illustrates the idea with an anecdote from the bat mitzvah of his closest friend’s daughter. The rabbi urges the young woman to remind herself that she is being constantly watched and judged by God: “The rabbi’s point was clear: if you can never evade the watchful eyes of a supreme authority, there is no choice but to follow the dictates that authority imposes. . . . All oppressive authorities—political, religious, societal, parental—rely on this vital truth, using it as a principal tool to enforce orthodoxies, compel adherence, and quash dissent.”

Indeed, Mr. Greenwald claims that the threat of terrorism is just a pretext for control: that terrorism is a trivial concern because the odds of any particular person being killed by a terrorist are minuscule and purported terrorists have been shown to be “incompetent” and “amateurish.” He appears not to accept that terrorists use both random and targeted violence to intimidate nations and people and to undermine their confidence in the ability of anyone other than the terrorists themselves to guarantee those people’s continued safety. One can only imagine the scorn that he would have heaped on anyone who suggested on Sept. 10, 2001, that 19 men armed with box cutters could hijack airplanes and use them to destroy tall buildings and kill thousands—let alone in the name of Islam, whose adherents he claims are just scapegoats of a malicious government.

How does someone come up with such views? Of the two groups that can develop paranoid styles—threatened insiders and frustrated outsiders—Mr. Greenwald is plainly in the second category. He has not seen government up close or studied seriously how it actually works, and so his mind, in Hofstadter’s words, “is far more coherent than the real world.” Mr. Greenwald and those who think like him have failed to develop, in the words of another historian, Lewis Namier, “a historical sense—an intuitive understanding of how things do not happen.” Given the danger of letting people like Mr. Greenwald get close enough to authority to develop such a sense, I for one hope he never will.

** Mr. Mukasey was the 81st Attorney General of the United States and served as a U.S. District Judge for the Southern District of New York. He is also a member of the Board of Directors of the American Center for Democracy.