Studies of al Nusra and Foreign Fighters in Syria* 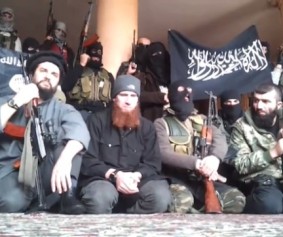 1.   On May 13, 2014, the ITIC issued a new study (112 pages long) about the phenomenon of foreign fighters from the Arab world who fight in Syria.[1] Most of the jihadist operatives fighting against the Assad regime joined the ranks of the Al-Nusra Front, the branch of Al-Qaeda in Syria, and the Islamic State in Iraq and Greater Syria, a jihadist organization operating in Iraq and Syria.

2.   This study is the last in a series of 17 studies and bulletins written by the ITIC research staff which began in September 2013 (See below). The publications deal with the growing strength of Al-Qaeda and the global jihad in Syria and the dangers they pose for the Arab-Muslim world, Israel, the West and the international community in general.

3.   The phenomenon of the foreign fighters who have joined the rebels in Syria gained the attention of the ITIC research staff, as well as various think tanks and research institutions in the West (especially the United States and Britain). That isbecause foreign fighters in Syria pose a potential threat to their countries of origin.

5.   The studies and bulletins were translated into English and can be found on the ITIC website. Some of them were also translated into other languages. The English versions are the following:

6.   The Phenomenon of Foreign Fighters from the Arab World in the Syrian Civil War (May 2014).

7.   Involvement of Operatives Who Returned from Syria in the Terrorist Campaign against the Egyptian Regime (May 5, 2014).

8.   Foreign fighters from various countries and regions in Asia, fighting against the Syrian regime, most of them in organizations affiliated with Al-Qaeda and the global jihad (April 15, 2014).

9.   Sheikh Sami al-Uraydi: Portrait of a Jordanian cleric who serves as a senior religious authority for the Al-Nusra Front, Al-Qaeda’s Syrian branch (February 24, 2014).

11.   Al-Qaeda’s Repudiation of the Islamic State in Iraq and Greater Syria – Overview and Implications (February 17, 2014).

12.   Using Suicide Bombers as Weapons: The leading modus operandi in the Al-Nusra Front and Islamic State in Iraq and Greater Syria’s struggle against the Syrian regime and Hezbollah in Lebanon (February 11, 2014).

13.   Foreign fighters from Western countries in the ranks of the rebel organizations affiliated with Al-Qaeda and the global jihad in Syria (February 3, 2014).

14.   Israeli Arabs and Palestinians Join the Ranks of the Rebels in Syria, Mainly Organizations Affiliated with Al-Qaeda and the Global Jihad (January 19, 2014).

15.   Abu Muhammad al-Julani, head of the Al-Nusra Front, the branch of Al-Qaeda in Syria, gave a rare interview in which he tried to show pragmatism without abandoning the organization’s extreme jihadist nature and objectives (January 5, 2014).

17.   The rebels in Syria include a few dozen operatives from the Salafist-jihadi organizations in the Gaza Strip (December 8, 2013).

18.   Operatives from the Al-Nusra Front, Al-Qaeda’s branch in Syria, together with other rebel organizations, have taken over the large oil field in Deir ez-Zor (December 3, 2013).

20.   The Al-Nusra Front played a major role in the rebel takeover of a large Syrian army arsenal southeast of Homs (November 14, 2013).

21.   Ayman al-Zawahiri, leader of Al-Qaeda, urges jihadist forces fighting the Assad regime in Syria to unite in a common struggle to establish an Islamic Caliphate (October 16, 2013).

22.   The Al-Nusra Front (Jabhat al-Nusra) is an Al-Qaeda Salafist-jihadi network, prominent in the rebel organizations in Syria. It seeks to overthrow the Assad regime and establish an Islamic Caliphate in Greater Syria, a center for regional and international terrorism and subversion (September 17, 2013).

[1] The full Hebrew version and the English introduction are available on the ITIC website. The full version is currently being translated into English.