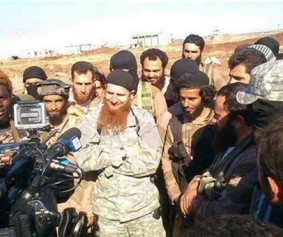 Several years and many thousands of jihad fighters from at least 70 countries joining the Syrian blood-bath has finally raised the alarm that Syria has replaced Afghanistan as the new training ground for al Qaeda and its like.

Western law enforcement – especially in Great Britain, Canada and even in the U.S. –  are increasingly worried about the increasing numbers of hardened jihad-tourists who either return to their home countries, or continue their travels to recruit and even train others to advance the global jihad.

Some in the West attribute the growing wave of jihadis departing from Syria to infighting. By now, it should have been realized that such struggles only serve whichever side to recruit new members to their fight. Since Islam is the religion of perpetual interpretations, different elements pull in different directions that cause everlasting fighting.

Arab/Muslim countries that provide the vast majority of jihadis and understand the nature of the fighting, show signs of growing anxiety. Al-Shorfa, a UK-based USCENTCOM sponsored web site, reported on May 8, 2014, that Syrian “veterans” had been among 200 people charged in terrorist attacks in Egypt that killed 40 police officers and 15 civilians and Cairo and Sinai.

Last week, Egypt’s Prosecutor General charged 200, of which 98 fugitives who were identified as members of the al-Qaeda-inspired Ansar Beit al-Maqdis group, also known as the Champions of Jerusalem.

The Saudis, who support the Syrian Sunnis, are at the same time very concerned of the return of al-Qadea influenced jihadis, and in February 2014, Saudi king Abdullah Bin Abdul Aziz issued a royal decree, saying “that any Saudi citizen who joins extremist religious and ideological groups, or those classified as terrorist organisations…adopting their ideology or promoting them ‘through speech or writing’ would also incur prison sentences.”

As the situation in Ukraine was heating up, the Iranian regime’s mouth-piece, Fars News, had an interesting twist on how the Saudis handle such jihadis:

“A large number of terrorist Takfiri fighters in Syria, who bear Saudi and Chechnian nationalities and receive financial and military backup from the Saudi intelligence agency, have been transferred to the Ukrainian capital, Kiev, on several planes to help the Ukrainian army in its fight against the pro-Russian population.”

The anonymous source quoted by Fars News also added that “The forces have been immediately dispatched to Kramatosk city in Eastern Ukraine, and are now fighting beside the Ukrainian army forces against the pro-Russians under the name of militias who support the government.”

The same source followed up with more details about “A large group of Chechnian militants who were fighting against the Syrian government in the last three years have been dispatched to Tbilisi in Georgia to prepare for terrorist operations on Russian territories.” Of course, there is a possibility that the Iranians are making this up. Nonetheless, this makes for a plausible scenario.

The Meir Amit Intelligence and Terrorism Information Center has produced an update on its ongoing study of Arab foreign jihadi’s in Syria.

2.   Some of the Arab foreign fighters are young and have no military training or experience. They joined the ranks of the rebels for ideological or religious-sectarian reasons (e.g., participating in jihad, fighting the Shi’ites). Others were motivated by the desire to raise their socio-economic status. Among other reasons were hostility to the Assad regime, the desire for adventure, and identification with the suffering of the Syrian people. Within the Arab foreign fighters there is a hard core of Salafist-jihadi, Al-Qaeda and global jihad operatives, some of them veterans of the fighting in Afghanistan, Iraq, Libya and other Islamic combat zones. Most of the Arab foreign fighters come from towns and villages, with only a few coming from the main cities.

3.   In our assessment, the Arab foreign fighters form the backbone of the forces fighting in the ranks of the Al-Nusra Front and the ISIS.They also have a high casualty rate and many are killed. In addition, among the foreign fighter suicide bombers in Syria from organizations affiliated Al-Qaeda and the global jihad, the number of Arabs is conspicuous, especially those from Saudi Arabia.[3]

4.   Of the Arab countries from which the largest number of foreign fighters come, Tunisia, Libya and Egypt experienced the regional upheaval. Two other countries, Saudi Arabia and Jordan, are pro-West, and preserved their stability in the era of regional upheaval, with deeply-rooted radical Islamic elements. Initially those five countries did not attempt to stem the flow of their citizens leaving for Syria, regarding them as part of their support for the campaign to overthrow the Assad regime and to confront Iran and Shi’ite Islam. Only during the past year, when the dangers of terrorism and subversion from the Syrian veterans became apparent as they returned to their countries of origin, did some of the Arab regimes take preventive action. They took legislative steps (Saudi Arabia, for example) and prevented the foreign fighters from leaving for Syria, monitored those who returned, and dealt with the local radical organizations providing them with logistical support. However, it is still unclear to what extent the steps taken have been effective.

5.   Some of the foreign fighters joined the fighting in Syria on an individual basis. However, in certain prominent instances local Salafist-jihadi organizations and activists who preach joining the fighting have given the foreign fighters logistical support and dispatched them to Syria. They include, for example, Ansar al-Sharia in Tunisia, Ansar and Sharia and Ansar Bayt al-Maqdis in Egypt, Jam’iyya al-Asala al-Islamiyya in Bahrain, Fatah al-Islam in Lebanon, the Salafist movement in Jordan, Jaish al-Ummah and other Salafist-jihadi organizations and networks in the Gaza Strip.

6.   The Arab foreign fighters in the ranks of the Al-Nusra Front and other jihadist organizations are a ticking bomb for their countries of origin, especially countries like Saudi Arabia, Egypt, Jordan, Libya, Iraq and the Persian Gulf states. That is because in Syria the foreign fighters acquire operational experience and combat skills, are inculcated with the ideology of jihad and radical Islam, and form a network of contacts with Salafist-jihadi organizations and operatives throughout the Arab-Muslim world. They are expected to return to their countries of origin (as some of them already have), join local Salafist-jihadi networks or establish new networks for terrorism and subversion. In some cases, in our assessment, the networks will operate in coordination with or be directed by the Al-Nusra Front and the ISIS through contacts made in Syria.

7.   However, in our assessment, so far the involvement of Syrian veterans in terrorism and subversion in the various Arab countries is still nascent. However, there have been cases which indicate what the future may hold: in Egypt it was reported that jihadist veterans of the Syrian conflict were detained for their involvement in terrorist activities against the Egyptian regime, or were killed during a terrorist attack carried out by the Ansar Bayt al-Maqdis (which is affiliated with the global jihad).[4] In May 2014 the Saudi Arabian ministry of the interior recently announced the exposure of a terrorist network that was in contact with extremists in Syria and Yemen. In Jordan the ISISencouraged demonstrations and riots in the southern city of Ma’an, a hotbed of anti-regime subversive activity. In Israel, two Israeli Arabs were asked by jihadist organizations to carry out terrorist attacks in Israeli territory after they had returned from Syria. In addition, in December 2013 a jihadist network was exposed in east Jerusalem that had been asked to send one of its operatives to Syria for military training and to coordinate terrorist attacks. In Iraq the ISIS, which is affiliated with the global jihad, holds trans-national military-terrorist-subversive activities. The activities do not distinguish between Iraq and Syria, and many expand to Arab countries, Jordan for example.

Estimates of Arab Foreign Fighters in the Arab World

8.   The countries from which the Arab foreign fighters left for Syria can be divided into four categories, according to the number of fighters from each one:

1) Libya, Tunisia, Jordan, Saudi Arabia – According to estimates, between several hundred and approximately one thousand fighters.

2) Egypt and Iraq – Hundreds of fighters.

4) Sudan, Yemen and Oman – A few fighters from each country.

9.   The following table summarizes the estimates of Arab foreign fighters from the various countries of origin:[5]

Libyan foreign fighters were joined by non-Libyans who had fought there in the revolution against Muammar Gaddafi.

Some of them fought in Libya against Muammar Gaddafi.

Between one and a few individuals

[1]This study is the continuation of the January 1, 2014 bulletin “Foreign Fighters in Syria,” as well as additional studies of foreign fighters from Western countries (February 2014) from Asia (April 2014). The full version of the study is available in Hebrew on the ITIC website and is currently being translated into English.

[3]In 2013 the ITIC counted 53 operatives from the Al-Nusra Front and the ISIS who carried out suicide bombing attacks against targets affiliated with the Syrian regime. The names of 30 were identified, 23 foreign fighters and seven Syrians. Of the 23 foreigners, 13 were Saudis, four were Jordanians, and three were Iraqis. For further information see the February 11, 2014 bulletin “Using suicide bombers as weapons: The leading modus operandi in the Al-Nusra Front and the ISIS’ struggle against the Syrian regime and Hezbollah in Lebanon”[4]For further information see the May 5, 2014 bulletin “Involvement of Operatives Who Returned from Syria in the Terrorist Campaign against the Egyptian Regime”

[5]The estimates in this study relate to the overall number of foreign fighters from each country according to categories which cannot always be distinguished between: Arab fighters who are still fighting in Syria (the majority), those who returned to the countries of origin (the minority), and those who were killed in the fighting in Syria or who were taken captive by the Syrian regime.

[6]A report on Palestinian and Israeli Arab foreign fighters was issued on January 19, 2014, therefore Israeli Arabs and Palestinians from the Gaza Strip and the Palestinian Authority are not included in this study.