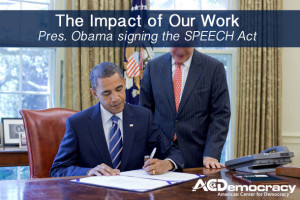 The ACD work has global following from over 150 countries.

Some of ACD Achievements:

The passage of Rachel’s Law in New York State in 2008, the federal SPEECH Act in 2010, and similar legislation in various states have resulted in an international effort to raise awareness of the threat of libel tourism and its chilling effect on free speech, and to libel reform in the U.K.:

2013 CHAPTER 26
An Act to amend the law of defamation.
[25th April 2013]
Be it enacted by the Queen’s most Excellent Majesty, by and with the advice and consent of the Lords Spiritual and Temporal, and Commons, in this present Parliament assembled, and by the authority of the same, as follows:

The announcement of a Defamation Bill in the Queen’s Speech today (9th May) has been welcomed by campaigners from the Libel Reform Campaign.

Although the contents of the draft bill have not been published, they are thought to include an end to libel ‘tourism’, a new public interest defence for publishers, measures to strike out trivial claims at an earlier stage, new provision for online publication and a single publication rule.

Kirsty Hughes, chief executive of Index on Censorship, which formed the Libel Reform Campaign alongside English PEN and Sense About Science, said: “Finally the government is to stop libel tourism so wealthy foreign claimants can no longer use our High Court to silence their critics abroad. The 60,000 people who signed the Libel Reform Campaign will be delighted that the government has announced this reform, though we’ll be awaiting the detail.”

English PEN director Jonathan Heawood said: “Over the past three years, the Libel Reform Campaign has shown how our unfair libel laws are causing legitimate books to be pulped and publishers to engage in unnecessary self-censorship. The Government has responded to the public demand for change, and we welcome this long-overdue chance for reform. It must now ensure that the protections for free speech are as robust as possible.”

The “SPEECH Act” –  A View From Abroad

I wanted to take a moment to make you aware that last week a US District Court in Florida issued what I believe to be the first judgment for declaratory relief granted under The SPEECH Act. The lawsuit, filed in January of this year, was styled:

The defendants (the foreign plaintiffs) originally tried to defend the US lawsuit but later amended some of their answers, removed all of their affirmative defenses and subsequently agreed to a Stipulated Judgment.

I would like to personally thank you for your tireless efforts in helping to bring about this important new law to protect American citizens and CDA protected websites from libel tourists.

Read the judgment to which Mr. Lawrence refers.

Use of Intimidation In Civil Liberties: Recent Cases In the OSCE Area