Syria: The Islamic State of Iraq and al-Sham and the “Cleansing” of Deir ez-Zour 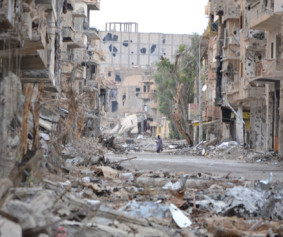 This piece is the first in a brief series of publications that examine activity by the Islamic State of Iraq and al-Sham in Syria and Iraq. ISIS is active on both sides of the border, executing complex attacks in Deir ez-Zour and organizing local governance efforts, while carrying out a well-organized campaign in Iraq. Upcoming releases from ISW will examine these issues in greater detail, exploring the non-military activities that ISIS publicizes in Syria, and comparing two “annual reports” released by the groups describing their “progress” in Iraq.

Following the January 2014 uprising by rebel groups in Syria against the Islamic State of Iraq and al-Sham (ISIS), ISIS contracted its footprint in Syria. The group was pushed out, tactically withdrew, or went below the radar in cities and towns across much of Idlib, Aleppo, and Deir ez-Zour. It continued to battle the Kurds in Hasaka, but constituted most of its strength in ar-Raqqa, where it is in firm control of the provincial capital and several other towns. In Syria’s eastern province of Deir ez-Zour, ISIS is attempting a resurgence. At the end of March 2014, ISIS began to move forces from the north into place for an offensive back into the heart of rebel territory in Deir ez-Zour province. This resurgence has come in the form of an offensive largely against Jabhat al-Nusra and the Islamic Front, which are predominant in the province. Local tribal militias have come to play an increasing role as well.

In Phase I of the offensive ISIS moved south along the Khabur River towards al-Basira, where the Khabur and Euphrates Rivers meet. In Phase II, ISIS activated a second fighting force just south of Deir ez-Zour city to push south along the Euphrates, thereby attacking al-Basira from two different axes. The main goal of the ISIS offensive in Deir ez-Zour is to capture and control al-Basira, which is a critical supply route junction. Controlling al-Basira will support ISIS in consolidating control in Eastern Syria and give it additional routes to resupply and reinforce ar-Raqqa for an eventual push back into northwestern Syria. The area of the as-Suwar – Deir ez-Zour – al-Basira triangle that is the ultimate focus of the offensive also indicates that ISIS wants control of the local oilfields and facilities. Some of the most important oil production areas in Syria including the al-Jafra oil field, the Conoco plant, and the al-Omar oilfield are accessed from this area.

While it is possible that ISIS hopes to establish a second regional capital in Deir ez-Zour as it has in ar-Raqqa, it is not currently well-positioned to do so, making it more likely that securing supply routes and oil are the short-term goals of the offensive. The loss of significant Syrian territory in the north and east of the country in January and February means that ISIS would be stretching itself thin if it were to establish governance structures in Deir ez-Zour at this time. The effort to govern Deir ez-Zour would be a more complicated effort than it was in ar-Raqqa due to the presence of regime forces in northern Deir ez-Zour city and the military airport, as well as unfriendly, militarized tribal militias in the area.

Deir ez-Zour is important for several reasons. First, it contains the main supply routes between ISIS’s stronghold in ar-Raqqa, and its Iraqi forces. The province of Deir ez-Zour is covered by desert and bisected by two major rivers. The Euphrates River runs through the province from northwest to southeast, connecting the Iraqi border town of Albu Kamal with ar-Raqqa. The Khabur River runs from the northeast where it flows from Hasaka (its northern tributaries reach all the way to Turkey), to the center of the province where it joins the Euphrates. The town of al-Basira lies at the confluence of these two rivers, and all of the major cities and towns as well as major roads in the province are located along their banks. The province is relatively sparsely populated. The Assad regime’s control in Deir ez-Zour has been reduced to the military airport to the west of the city, from which it continues to launch air raids, and a handful of existing security facilities in neighborhoods in the northern part of the city. All of these factors combine to make the area an ideally lawless staging ground for ISIS.

The second reason that Deir ez-Zour is important is that it contains most of Syria’s oil reserves. The Syrian regime had withdrawn from all of the oil fields of Deir ez-Zour by early 2013. Since then, the province’s oil resources have been a source of funding and conflict for the area’s tribes, local rebel groups, and national/transnational terrorist organizations including ISIS and Jabhat al-Nusra (JN).

Signs that ISIS was planning a return to Deir ez-Zour were evident in March 2014 in “Phase I” when ISIS started moving its Hasaka forces down the Khabur River, contesting villages along the way. Markadeh is the last major town in Hasaka before the Khabur enters Deir ez-Zour. There were scattered clashes between ISIS and JN in and around Markadeh throughout March. Then ISIS launched a surprise attack on JN, the Islamic Front (IF), and allied tribal forces, which ISIS calls the “Coalition of Jolani and the Sahwat,” in Markadeh on March 30. More than 50 were killed. While there are conflicting claims about the results, and small clashes continued, it seems that ISIS was successful in taking control of most of the town, which it has since renamed to Misrah. ISIS has recently begun issuing “reforms” in Misrah and undertaking reconstruction efforts. ISIS continued pushing south along the river, making it to Western Ghariba village (or slightly further north around Jina, depending on which side is reporting) by April 5. This put ISIS right on the edge of Deir ez-Zour province.