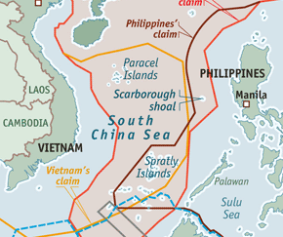 Thousands of workers took to the streets to demonstrate against “Chinese oil drilling in a contested area of the South China Sea.”

It did not take long before the demonstrations turned into riots. This came “amid high tensions between China and Vietnam, which have close trade and political ties despite a history of incursions and territorial battles that are the source of deep resentment among Vietnamese.”

It is with bittersweet recall that I read and re-read the Reuters article which described the damage done to Chinese businesses by a mob of 19,000 Vietnamese workers.  It seems that Vietnamese dudgeon was touched-off by China’s recent announcement that it would begin drilling for oil in the South China Sea waters claimed by Viet Nam.

From my computer I can look through a window from where I am typing and see two very large true glass Japanese-manufactured floats that I collected while on a 1970 visit to Pattle and other Islets located within the Paracel Islands.  The Paracels themselves are a part of the extensive Crescent Group of islands which were then claimed by Vietnam in the South China Sea and rarely visited by anyone.

The Paracels were annexed by French Indochina in 1932, after which its Pattle Island was occupied by a small Foreign Legion contingent. A weather station was soon built on Pattle, and its maintenance was assumed by South Vietnam after it achieved independence from France in 1954. In 1947 the Republic of China issued a map claiming the Paracel and Spratly island groups. Since then the islands have been claimed by both the Peoples Republic of China (PRC) and Taiwan, while Vietnam claims both, and the Philippines claims the Spratlys.  Taiwan has managed to avoid involvement in the Beijing-Hanoi dispute.  However, Taiwan does occupy Taiping, the largest island in the Spratlys, where it has built an air strip.

The PRC maintains that its right to a huge area encompassing the South China Sea derives from “2,000 years of history.”  That right is disputed by Vietnam which claims it has “actively ruled” the islands since the 17th Century and has ancient maps to prove its claim.

At the time (1970) I visited the Paracels I was working in the Agency for International Development agriculture office at Danang, Vietnam.  Someone had discovered that following WWII French Indochina officials located at Tourane (Danang) believed that valuable nitrate (guano) deposits that blanketed Pattle Island could be mined. The French had sent a team to Pattle, but the effort to mine and market the resource was truncated by the war in Indochina.  When I arrived, the only visible remnant of the French occupation were some mounds of hardened nitrate and a French Foreign Legion cemetery that held the remains of a score or so of soldiers (mostly Senegalese) who had fought under the French flag.

Every three months the Vietnamese military rotated a company of Regional Forces to maintain the continuous occupation of Pattle and the Paracels.  Simply put, the object was to show the Vietnamese flag.  However, three months was the limit a soldier could endure in what was then one of the world’s most the isolated places. The Vietnamese captain of a former WWII Landing Craft who transported me to the islands explained that Saigon was not particularly worried about an invasion of from the North Vietnamese Army.  Rather, South Vietnam feared a Chinese invasion to reclaim sovereignty to the islands.  The Chinese claim was based on recently produced Peoples Republic of China (PRC) maps which in turn were based on very ancient Chinese claims to the South China Sea. Taking the long view, Beijing paid absolutely no attention to Vietnamese claims which were but centuries old. China seemingly argues (as Islam does), that a land once occupied remains its territory in perpetuity.

The Vietnamese captain’s fear was soon realized: In 1974 the PRC invaded and then occupied the Paracels and the nearby Spratly Islands.  In the Paracels, which the PRC renamed the Xisha Islands, it began the construction of a harbor and airfield on nearby Woody Island.

For more than three decades there has been myriad speculation on the potential for oil in the South China Sea — and in the Paracel and Spratly archipelagos in particular.  Nevertheless, drilling for oil and gas focused on the South China Sea’s littoral.  While the region has an estimated 7.5 billion barrels of “proven” oil reserves, at present oil production is currently less than 1.5 million barrels a day.  Thus far, China has benefitted from its Lufeng Field located southeast of Hong Kong, while Vietnam has been pumping oil since 1997 from its Block 46 located to its far southwest.

It has taken time, but given China’s insatiable demand for oil the South China Sea’s Spratly Islands region has finally attracted Chinese interest.  China Oilfield Services Limited has now positioned a drilling rig some 20 miles from Zhongjian Island (Triton Island), the southernmost extension of the Paracels.  Up to now, neither the Spratlys nor the Paracels have been of imposing commercial interest, and one can hope that drilling in either region will end up anything other than a succession of dry holes.  However, if China does strike oil one can expect the Vietnamese mob will raze even more Chinese businesses.

I noted at the beginning that the Parcels evoke bittersweet memories.  Bittersweet because the islands and islets I visited were honeycombed by holes created by thousands of sea turtles while laying their eggs.  Relatively unmolested for two decades, one can only imagine what has happened to that population after the PRC occupation of the Paracels.  Indeed, the Chinese appetite for turtle eggs can be said to be as voracious as it is for oil.

* J. Millard Burr is a senior fellow at the American Center for Democracy.

Three emerging crises in the Asia Pacific illustrate China’s new offensive posture and the need for a strong multinational response. Recent moves on China’s north and south Pacific flanks include establishing an air defense zone over the Senkaku Islands, building a base on a disputed reef in the Spratly Islands, and moving a deep-water drilling rig into coastal waters off Vietnam.

China’s aggressive moves in the region reflect the new willingness of adversary states to create facts on the ground to establish durable claims to disputed territories. Failure to respond to these challenges invites more serious crises that could lead to open conflict, including control of Taiwan and the waters of the Asia Pacific through which more than half the world’s commerce must pass.

Over the past year, China has ramped up the pressure in its dispute with Japan over the uninhabited Senkaku Islands, 105 miles northeast of Taiwan. The islands, claimed by Japan since 1895, were transferred to Japanese administration from postwar U.S. control in 1972. However, Beijing also claims the islands, and in November 2013 unilaterally included the area in its self-proclaimed East China Sea Air Defense Identification Zone. The United States and the international community ignored China’s airspace claim.

The long-simmering dispute re-emerged in April when President Barack Obama said during an official visit to the region that the U.S. “treaty commitment to Japan’s security is absolute, and Article 5 covers all territories under Japan’s administration, including the Senkaku Islands.” Administration of the islands should not be “subject to change unilaterally,” he said.

Chinese coast guard ships are patrolling waters around the oil rig, and Beijing has vowed to use force to protect what it claims is a legitimate right to exploit natural resources in an area it considers sovereign territory. Beijing demonstrated its seriousness when a Chinese vessel rammed and damaged Vietnamese ships attempting to investigate the oil  rig.

On Thursday, the Philippine government released surveillance photos of a Chinese-built installation on Johnson South Reef (known as Mabini in Manila and Chigua in Beijing) in the disputed Spratly Islands. China has been building up the reef for six months and it is now a 74-acre island – big enough to accommodate an airstrip, a military installation, a refueling point, or a support base for more deep-water drilling. This follows a similar incident in January 2013 when China seized a shoal off the Philippine main island of Luzon.

A nonbinding 2002 agreement between China and the Association of Southeast Asian Nations (ASEAN) known as the Declaration on the Conduct of Parties in the South China Sea sought to restrain all sides from taking actions that would “complicate or escalate disputes,” including occupying uninhabited areas. On May 11, ASEAN issued the Naypyitaw Declaration in which member nations reiterated their desire to see all parties to the dispute exercise self-restraint and resolve maritime and territorial disputes by peaceful means without resorting to threats or use of force.

Beijing has brushed off concerns about its sudden assertion of power, insisting that the disputed areas are sovereign Chinese territory and therefore of no concern to other nations.

China’s aggressive acts have opened the door for Japanese Prime Minister Shinzo Abe to reorient his country’s defense posture and reach  out to countries that have historically distrusted Tokyo. Japan publicly supported ASEAN’s Naypyitaw Declaration, and after a visit to Brussels,  Abe signed a cooperative agreement with NATO to resist unilateral moves to seize territory.

A Japanese government study group established by Abe also recommended that the government reinterpret Japan’s constitution to lift  the ban on collective self-defense, and in a nationally televised address on Thursday Abe said Japan should allow its military to come to the aid of allies under attack as a means of strengthening deterrence in the region.

It is not clear whether Washington will fully appreciate this shift in Japanese defense policy. Obama has previously stressed the importance of resolving the Senkaku Islands issue peacefully by “not escalating the situation, keeping the rhetoric low, not taking provocative actions, and trying to determine how both Japan and China can work co-operatively together.”

However, Beijing is seeking to throw the administration off balance by blaming Washington for forcing China to make aggressive moves. At a Pentagon news conference Thursday, Gen. Fang Fenghui, chief of staff of the People’s Liberation Army, said “the [Asian pivot] strategy of the U.S. has stirred up some of the problems which make the South China Sea and the East China Sea not so calm as before.” Fang said China would respond forcefully to any attempts to interfere with what it believes are its sovereign rights, adding, “We do not create trouble but we are not afraid of trouble.”

China is finding support from another revisionist power: Russia. After Obama concluded his trip to Asia, Russia and China announced plans for joint naval exercises near the Senkaku Islands in May. Since the United States has shown no willingness to stand up militarily to Russia in Europe, a potential Sino-Russian naval entente in the Pacific poses greater dangers than China would by acting on its own.

Beijing and Moscow are exploiting the characteristic unwillingness of the United States to respond forcefully as they unilaterally change the facts on the ground. Whether in the Spratlys or in Crimea, China and Russia are simply seizing territory and daring the international community to respond.

In some respects the contest over the Senkaku Islands is reminiscent of the 1958 crisis over the islands of Quemoy and Matsu in the Taiwan Strait. Then the United States used nuclear brinkmanship to force China away from conflict. But the correlation of forces and interests has changed dramatically since then.

As Beijing presses its claims further into the Pacific Ocean, it presents a direct and explicit challenge to the Asian pivot strategy and to U.S. naval dominance in the region. Failure to respond effectively will establish a precedent for future, more serious challenges, including control of Taiwan.

* James S. Robbins is a national security analyst and author of “This Time We Win: Revisiting the Tet Offensive.” This article originally appeared here.