Putin’s Regime and the Russians 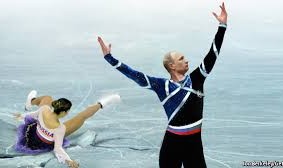 The original foreign policy neocons were right to argue that the character of a country’s political regime could tell one a good many things about the motivations behind its foreign policy.

How the U.S. could have ended up with a 21st-century foreign policy that openly rejects the idea that regime character is important is almost unfathomable given the events we have experienced and witnessed over the past 20 years.

Vladimir Putin and Russia have provided the latest lesson about regime character.  Hundreds of thousands of words have been written trying to ferret out Putin’s motivations.  Most are riddled with expressions of disbelief that the Russian people support him. But most Russians’ acceptance of Moscow’s domestic propaganda and outright lie-telling is nothing new.

Lenin, Stalin, and their successors never really created “the new Soviet man,” who feels responsible for society. Instead, the Tsar’s responsibility was taken over by the Communist party and is now taken over by Putin. Russians were and remained men who do nothing more than accept whatever comes along and figure out how they alone can survive it.

The people themselves are part of the regime, of course, as they ultimately allow rulers to rule. But the rulers are the ones who create regime character.  Paul Goble has discovered a piece by Russian sociologist Igor Eidman which explains how the fall of the Soviet Union brought Russia’s ruling elite to adopt a regime that brings together the worst features of capitalism and socialism.  If Eidman is right, and he surely is, we need to know this in figuring out how to deal with Putin (and probably his successors). It’s obvious that the reality of Russia and its post-Soviet regime make the thought of persuasion to 21st-century international norms ridiculous.

Putin’s System is the ‘Negative Convergence’ of Worst of Capitalism and Worst of Sovietism, Eidman Says*

Staunton [Virginia], May 12 – Vladimir Putin’s system represents a combination of “all the worst features of capitalism and socialism,” a fusion that represents “’negative convergence’ and one that has created “a monster,” according to Igor Eidman, a Russian sociologist and commentator who now lives in Germany.

In an essay on Kasparov.ru today, Eidman notes that 40 to 50 years ago, the theory of convergence of socialism and capitalism into “a future new society” that took the best features from each was quite popular, adding that “in the West, [that kind of] convergence to a certain extent took place”.

But “after the collapse of the USSR,” he argues, “a very different kind of convergence took place in the Russian Federation, one that “began to combine in itself the very worst aspects of ‘wild capitalism’ and the most repugnant characteristics of Soviet socialism.”

This “process of negative convergence” occurred gradually.  Beginning in the 1990s, he writes, Russian ‘reformers’ in an almost maniacal fashion introduced into life a parody version of capitalism from Soviet caricatures, which apparently had remained in their minds since childhood.”

All the bad things the Soviets had said about capitalism were now welcomed or even celebrated as an indication of societal transformation: oligarchs, corruption, mafia structures, workers without rights, a police that defends property but not people, constant uncertainty, drug addiction, prostitution, and exploitation, to name only a few.

At the same time, Eidman points out, “many negative Soviet characteristics were preserved: the economic dictatorship of the bureaucracy, the total power of the new bureaucratic nomenklatura, the suppression of private initiative, and so on.

Under Putin and especially in recent years, he continues, this “negative convergence sharply accelerated” to the point of absurdity with the worst features of each system being increased and their combination more firmly linked together and extended to “all spheres of life.”

In Russia today, “the administration of the country is based on the Soviet command-administrative system combine with the ‘wild capitalist’ integration of bureaucrats in market relations,” a system with “’minister capitalists’” and “’deputy-millionaires.’” Formally multi-party elections “’like in the West’” are combined with real appointments from top to bottom “as it was in the USSR.”

The most obvious convergence of “caricature capitalism and socialism” is in state television, Eidman says.  It “combines on the one hand, total Soviet propaganda (the unrestrained praise of the ‘wise policy of the party,’ that is, of Putin, patriotic pathos, and hatred of the West and its ‘agents’) and on the other hand,” the imposition of “Western mass culture,” with all of its shortcomings.

But “the most terrible” manifestation of this negative convergence is in Moscow’s foreign policy.  “In the international arena, the Russian authorities are now oriented [simultaneously] toward the practice of 19th century imperialism and toward the pre-war Soviet experience.”

According to Eidman, “Russia is conducting itself with Ukraine approximately as the US did with Mexico at the time of the seizure of Texas or as Stalin’s USSR did with Poland.  In its policy,” he says, “are combined Soviet ideological imperialism with bourgeois ‘commercial’ imperialism.”

Putin has thus “restored the most negative and dangerous in the Soviet system. You are nostalgic for the USSR?” Well, you now have “total state propaganda, official patriotism, the cult of personality of an authoritarian ruler, repression against those who disagree and the rebirth of the cold war.”

At the same time, however, the failings of “bandit capitalism” are becoming ever more deeply rooted. “Social inequality is growing, and the oligarchs who are exploiting the natural resources of the country are becoming with each year ever richer.  The rights of workers are practically destroyed; they are completely in the power of their masters.”

Services are increasing in price, and people are beginning to be thrown out of their apartments for failing to pay the rent.  “Free education and health care are receding into the past, everywhere money is demanded and if people don’t have it, they are simply left to die.”  “But on the other hand, ‘Crimea is Ours!’”

Putin’s “aggressive foreign policy” is leading to the growth in “the popularity of the regime,” Eidman notes. “But in practice what is being reborn is only the lack of freedom characteristic of Soviet times, a propagandistic bluff, and imperial pretensions integrated into a system of bandit capitalism.”

Just what this “negative convergence” in Russia will lead to is “not difficult to predict,” Eidman says.  There is a precedent, and it was at one time called fascism which represented an attempt to “combine the Soviet totalitarian model, imperialism, and an oligarchic capitalist economy.”  That, of course, his reader is supposed to recall, did  not end well for anyone.