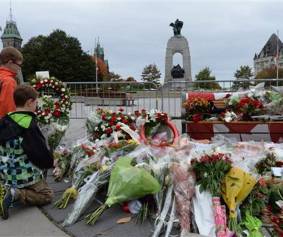 Islamist Terrorism in Canada – Rachel Ehrenfeld – The terror attacks in Montreal and Ottawa Canada should have not surprised anyone. The recent jihadist attacks attacks in Montreal and Ottawa came after years of repeated calls to fight the infidel by Canadian Islamist religious and “civic” leaders-including Imams and new coverts to Islam. They use mosques, Islamic centers, demonstrations, YouTube, print, online and social media. Though most state they are not supporting the ISIS, they advocate the very same ideology. And despite ISIS proven brutality and heightened recruitment campaigns, many in the West, including the U.S. and Canada continue to chronically suffer from Political Correctness, refusing to identify the jihadist as Muslims. They all but ignore jihadist yelling Allah- Akbar while spraying bullets into crowds, or stabbing to death pedestrians. Instead, they claim these are misguided, or meanly ill individuals, refusing to acknowledge that while not all Muslims are jihadists, all jihadists are Muslims. Muhammad Robert Heft, the Toronto based convert to Islam, seems to be well guided and very well funded.…more…

The ISIS Bootlegged Oil Revenue Myth – J. Millard Burr* and Rachel Ehrenfeld – Southern Iraq is rich in oil and is moving it to market. The North, however, is hard hit and is living hand to mouth. Detailing ISIS financial sources earlier this week, Under Secretary for Terrorism and Financial Intelligence David Cohen estimated the terrorists make $1 million a day selling oil. However, the important refinery at Dier al Zohr has been attacked by air, and the center of the petroleum activities in the Sunni-dominated North at Mosul is out of commission. Moreover, the mom and pop refineries that have sprung up over the last decade do not make that much of a difference. And while there are many stories about middlemen making a fortune, there is no solid evidence of it. Thus, ISIS’s receipt of $1 million a day from bootlegged oil seems highly suspect.…more…

Turkey Roasts – Norman A. Bailey – Turkey’s leadership has brought the country to an impossible position, and its dream of revived grandeur is receding.  There has not been a time since the collapse of the Ottoman Empire and the declaration of the Turkish Republic following the end of World War I that Turkey has been in such a web of conflicting interests, pressures and events as now. Now, as then, the developments are largely due to Turkey’s own disastrous decisions. In the case of the First World War, Turkey could perfectly well have remained neutral, as it did in World War II. Instead, it entered the war on the losing side.  Now, a series of policy decisions, many quite inexplicable on any rational basis, has led the country to a state of frozen animation, where every turn could lead to disaster. Let’s see:...more…

Talk of a Third Palestinian Uprising – Marc Schulman – Tel Aviv is often referred to [as] “a bubble,” separated from the other people ands events taking place in the rest of Israel. However, the events of last summer made it crystal clear that there really is no bubble. Events during the last two days have acted as a reminder, once again, that regardless of how peaceful the beaches and streets of Tel Aviv may be, we need not  look very far—whether toward Jerusalem (a 45-minute drive) or toward the Egyptian border, half an hour away) to see that anything but peace prevails. Yesterday, Israeli soldiers along the border were fired upon. Two were wounded. Today I discovered that one of the women soldiers who was wounded was the commander of one of my daughter’s best friends (a former American who spent a year living with us.) …Later, the reports were revised and described as an attack by smugglers. They were attempting to smuggle drugs from Sinai into Israel and were interrupted by the Israeli patrol. The reality is, the attack was probably a little of both. As Dr. Rachel Ehrenfeld wrote in her 1992 book Narco-Terrorism, and later in Funding-Evil: How Terrorism is Financed – and How to Stop It, the line between terrorist and narcotic smugglers is very thin. The narcotics trade has long been used to finance terrorist activities and terrorist have often helped the narcotic traders..…more…

Pearl Harbor, 9/11, Ebola – Sol W. Sanders – When all the debris is cleared away from the present controversies concerning the possibility of an outbreak of the deadly virus Ebola in the U.S., an important geopolitical marker will be registered. Epidemics have invaded U.S. shores before of course. There was the notable worldwide influenza epidemic (“Spanish ‘flu”) of 1918 which claimed 50 million lives worldwide. As World War I was ending, it laid low almost half of the then mobilized American soldiers, killing more than died in combat. In an era of poorer sanitation, long before antibiotics and the sulfa drugs and some of today’s routine emergency medical procedures, more than 375,000 died in the U.S. But it was also the world of steamships not of vast international air traffic. Today on an annual basis the highly mutable influenza virus, often sweeping out of south China, claims an average of 200,000 victims in the U.S. with deaths often reaching 35,000 among the more vulnerable, especially the elderly. Again with the prospect of an invasion of Ebola—against which there is not yet a cure with mortality in Africa running as high as 70%—Americans face a possibility, however remote, of a health catastrophe. That the U.S. was not prepared is obvious; how could it be otherwise?…more…

The Allure of Radical Islam in Canada – David Frum

Russia Kasparov: ‘Putin is a bigger threat than IS’– BBC

As the World Turns: Will the West Prevail? – Michel Gurfinkiel

A New Authorization for Use of Military Force Against the Islamic State: Comparison of Current Proposals in Brief – Matthew C. Weed, Analyst in Foreign Policy Legislation – October 21, 2014

Legal Sidebar: Can the President Bar Foreign Travelers from Ebola-Stricken Countries from Entering the United States? – 10/23/2014

Since 2001, the American Center for Democracy has exposed and monitored threats to our right to speak freely and to our political and economic freedoms and to our national security.. The ACD’s projects and publications focus on early warning systems to alert the public and to propose new policies to prevent and mitigate threats.
The ACD is a 501(c)(3) organization. Donations are tax deductible.