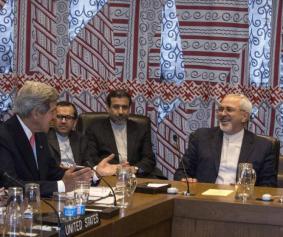 JERUSALEM — Israel is deeply concerned about the trajectory of the ongoing negotiations concerning Iran’s nuclear program. The talks are moving in the wrong direction, especially on the core issue of uranium enrichment.

Although Iran has modified its tone recently, there have hardly been any changes of substance since the soft-spoken president, Hassan Rouhani, took over the reins from his aggressive predecessor, Mahmoud Ahmadinejad.

Neither administration has budged from the insistence that Iran should retain most of the 9,400 operational centrifuges it deploys to enrich uranium, as well as its nearly completed nuclear reactor in Arak, which could produce plutonium in the future.

Iran has softened its inflammatory anti-Western rhetoric and shown some flexibility on less important issues but we must not be duped by these gestures. President Obama must stand by his declaration that no deal with Iran is better than a bad deal.

Israel also worries that the ongoing campaign against the Islamic State will come at the expense of the critical struggle against Iran’s nuclear program.

Fighting the Islamic State is vital and Israel unequivocally supports the global effort to prevent the formation of a new Islamic caliphate in the Middle East. But even more important is the imperative to preclude the already existing Islamic Republic of Iran—with its infamous track record of sponsoring terrorist groups, abusing human rights, calling for Israel’s destruction, and lying unabashedly for almost 20 years about its nuclear program—from acquiring a nuclear weapons capability.

Many experts argue that because a deal with Iran would necessarily include some restrictions on the Iranian nuclear project, an imperfect agreement is better than no agreement. They are wrong.

That’s because Iran has already made considerable progress in its attempt to advance toward nuclear weapons. An agreement that allows Iran to continue circling in a holding pattern will resemble what happened with North Korea after the 2007 agreement left large parts of Pyongyang’s nuclear capabilities intact, which enabled the North Koreans to produce several nuclear weapons in the following years. Under such conditions, nothing will stop Iran’s mullahs from landing, sooner or later, at their ultimate destination.

Second, a flawed deal would hand Iran practical advantages in return for almost nothing. In return for an insignificant and temporary reduction of its enrichment capacities, Iran stands to reap $100 billion per year when the sanctions are lifted; gain formal legitimacy for its uranium enrichment activities; and, despite its history of nuclear fraud and concealment, preserve the capability to produce nuclear weapons at a time it deems appropriate. Three factors will determine the breakout time needed for Iran to produce nuclear weapons: the quantity and quality of its remaining operational centrifuges; the amount of 3.5 percent enriched uranium that it is permitted to stockpile; and the final destiny of its remaining centrifuges and their infrastructure. The international community must have full and complete clarity on these fundamental issues.

Finally, a bad deal would pave the road to nuclear proliferation and herald the dawn of a nuclear arms race in the unstable Middle East. Other countries in the region will rush to build equivalent enrichment programs, which the international community will no longer be able to resist in good conscience, and which will drastically increase the risk of nuclear weapons falling into the hands of radical Islamists.

This actually leaves the negotiators with only two real options at the moment: a bad deal, or no deal at all. Barring a surprising change in Iran’s negotiating stance, there is zero chance of reaching a satisfactory good deal before the Nov. 24 deadline.

Choosing the “no deal” option will very likely produce extra pressure — including some new sanctions — on Iran and, subsequently, might pave the way for a better deal in the near future.

Standing our moral ground will transmit a clear message to the leaders in Tehran that the only way to escape mounting pressure will be through ultimately making the necessary significant compromises.

Not reaching a nuclear deal at this stage must not be considered a failure. It can even be regarded a qualified success, since it would represent the integrity of an international community adhering to its principles rather than sacrificing the future of global security because it is distracted by the worthy fight against Islamic State terrorists.

The 2003 war in Iraq came at the expense of blocking a greater threat: Iran’s nuclear project, which was then only in its embryonic stage. The international community must not repeat this mistake in 2014. The Islamic Republic of Iran remains the world foremost threat. We must guarantee that it never obtains nuclear weapons.