Talk of a Third Palestinian Uprising* 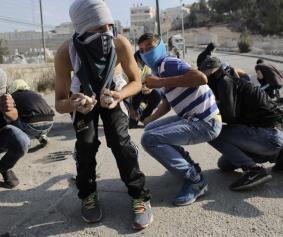 Tel Aviv is often referred to [as] “a bubble,” separated from the other people ands events taking place in the rest of Israel. However, the events of last summer made it crystal clear that there really is no bubble.

Events during the last two days have acted as a reminder, once again, that regardless of how peaceful the beaches and streets of Tel Aviv may be, we need not  look very far—whether toward Jerusalem (a 45-minute drive) or toward the Egyptian border, half an hour away) to see that anything but peace prevails.

Yesterday, Israeli soldiers along the border were fired upon. Two were wounded. Today I discovered that one of the women soldiers who was wounded was the commander of one of my daughter’s best friends (a former American who spent a year living with us.)

Looking at the a picture of the woman combat commander who was wounded, I realized she had been in our apartment a few months ago. Yesterday’s incident was first reported to be a terror attack. Later, the reports were revised and described as an attack by smugglers. They were attempting to smuggle drugs from Sinai into Israel and were interrupted by the Israeli patrol.

The reality is, the attack was probably a little of both. As Dr. Rachel Ehrenfeld wrote in her 1992 book Narco-Terrorism, and later in Funding-Evil: How Terrorism is Financed – and How to Stop It, the line between terrorist and narcotic smugglers is very thin. The narcotics trade has long been used to finance terrorist activities and terrorist have often helped the narcotic traders.

It is the army unit called “Karakal,” the only Israeli unit that fully integrates women as infantry soldiers, that guards the long border with Egypt. Despite Israel’s close cooperation with the Egyptian Army, that remains a dangerous border.

The terror attack in Jerusalem yesterday evening thrust a media spotlight on what is increasingly being seen as a possible third intifada. A six month old baby was killed in the attack.

The country felt an unusual level of connectivity to the murdered infant, as she was the granddaughter of the owner of a chain of eyewear stores, Optical Halpern. The chain has been running an extensive media campaign starring the grandfather in all the ads, turning him into a public figure.

Tensions in Jerusalem are nothing new. They have ebbed and flowed over the years.  Professor Yitzhak Reiter, Chair of Land-of-Israel Studies in the Ashkelon Academic College and a renowned expert on Jerusalem contends that the current events are really “a continuation of events this summer in response to the Gaza War.”

He believes that the events surrounding the Temple Mount are at the heart of the current unrest. The Temple Mount, on which [is] the Al Aqsa Mosque (where the Dome of the Rock is located), is the third holiest site in the world for Muslims. For Jews, the Temple Mount is the location where the Holy Temple existed, until it was destroyed by the Romans.

Since 1967, when Israel gained control of East Jerusalem, Jews have once again been allowed to visit the Temple Mount (but forbidden to pray there). In the past few months, a group of Israeli right-wingers, led by MK Moshe Feiglin, has been running a public campaign to change that. Palestinian President Mahmoud Abbas threw oil on the fire last week when he called on Palestinians to do all they could to stop Israeli settlers from praying on the Temple Mount.

Both the Palestinian and the Israeli sides seem to be primarily controlled by their respective extremists. Neither side is taking the requisite steps needed to lower the temperature and end the violence, which, regrettably, seems to be slowly but continually intensifying.

After a summer which first saw the kidnapping and murder of the three Israeli students followed by the burning to death of a Palestinian youth, immediately after which the summer’s war with Gaza began, what is desperately needed now are some responsible adults to take control and lower the tension.

* A version of this article was published in Newsweek on October 23.

** Political historian Marc Schulman is the editor of historycentral.com. An archive of his recent daily reports from Tel-Aviv can be found here. He is also a columnist for the Times of Israel.