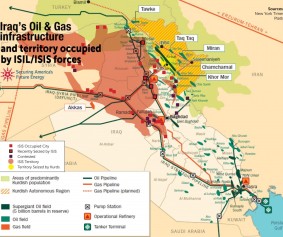 Southern Iraq is rich in oil and is moving it to market. The North, however, is hard hit and is living hand to mouth.

Detailing ISIS financial sources earlier this week, Under Secretary for Terrorism and Financial Intelligence David Cohen estimated the terrorists make $1 million a day selling oil. However, the important refinery at Dier al Zohr has been attacked by air, and the center of the petroleum activities in the Sunni-dominated North at Mosul is out of commission.

Moreover, the mom and pop refineries that have sprung up over the last decade do not make that much of a difference. And while there are many stories about middlemen making a fortune, there is no solid evidence of it. Thus, ISIS’s receipt of $1 million a day from bootlegged oil seems highly suspect.

1.  US airstrikes have struck ISIS-occupied oil refineries.  A small refinery, Deir el Zohr, has been damaged, and movement of oil through the large refinery in Mosul has been interrupted.

2.  Kurdish officials are making a major effort to halt the sale of illicit oil to and through Kurdistan.  They want nothing to impede their present movement of oil from Kurdistan’s own fields through their pipeline to Turkey.  In addition, they understand how important funding is to the maintenance of the ISIS.

3.  There is no movement of oil through the pipelines that exist in territory now held by ISIS.

4.  If no oil is moved by pipeline, then the commerce in bootlegged oil must be done by truck.

5.  A large American tanker-truck carries 200 barrels of oil.  It is assumed that tanker-trucks in Iraq and Syria are somewhat smaller, generally half the size of those used in the USA.  Assumption: Tanker-truck = 100 bbl.

6.  Even though the price of oil for both Brent and West Texas has fallen recently, let us assume a calculation of $100 a barrel. However, it has been reported that oil marketed by ISIS is sold at a major discount, approaching half that on the international market. Thus, ISIS is selling oil at approximately $50 a barrel.

7.  The oil must be moved to Turkish and other middlemen by truck, and the largest Iraqi or Syrian transport truck can move about 50 bbl.

8.  Thus, we have the following equation:  If, as the U.S. government states, the ISIS receives $1 million a day in sales of oil, to reach that amount some 20,000 bbl a day at $50 a barrel must be moved.  And moving 20,000 bbl means the daily movement of at least 400 trucks on the road (400 trucks x 50 bbl capacity = 20,000 bbl). Since smaller trucks and other transportation means would also likely be involved, the numbers of vehicles moving oil would have to be in the thousands.

9.  The movement of 400 oil tankers and or thousands of smaller vehicles on the same route daily would be easy to spot.  A continuous movement would not escape notice of the intelligence services given the war-torn landscape and the small number of border crossings into Turkey.

Given the above, the sort of activity that would allow the sale of $1 million a day in crude does not seem possible.  Counter-arguments are welcomed.

* J. Millard Burr is a Senior Fellow at the American Center for Democracy. Rachel Ehrenfeld is ACD’s director