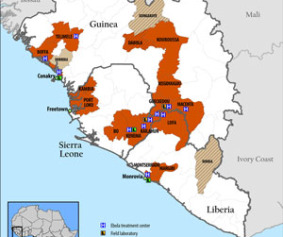 When all the debris is cleared away from the present controversies concerning the possibility of an outbreak of the deadly virus Ebola in the U.S., an important geopolitical marker will be registered.

Epidemics have invaded U.S. shores before of course. There was the notable worldwide influenza epidemic (“Spanish ‘flu”) of 1918 which claimed 50 million lives worldwide. As World War I was ending, it laid low almost half of the then mobilized American soldiers, killing more than died in combat. In an era of poorer sanitation, long before antibiotics and the sulfa drugs and some of today’s routine emergency medical procedures, more than 375,000 died in the U.S. But it was also the world of steamships not of vast international air traffic.

Today on an annual basis the highly mutable influenza virus, often sweeping out of south China, claims an average of 200,000 victims in the U.S. with deaths often reaching 35,000 among the more vulnerable, especially the elderly.

Again with the prospect of an invasion of Ebola—against which there is not yet a cure with mortality in Africa running as high as 70%—Americans face a possibility, however remote, of a health catastrophe.

That the U.S. was not prepared is obvious; how could it be otherwise? That the Obama Administration did not take adequate measures when a threat was identified will be debated long after the November mid-term elections are decided and gone. At what level blame for the initial chaotic preparation for an onslaught should be assigned to the $3 trillion annual government and private health care establishment will also be a subject for discussion. Will the Ebola crisis focus the spotlight on hospital-acquired infections costing $30 billion annually and leading to nearly 100,000 patient deaths a year?

But what appears already clear is that the whole Ebola affair forces a turn on the political consciousness of the American electorate. It goes further than identifying the immediate culprits/scapegoats. Just as Pearl Harbor destroyed for all time the U.S. dogma that it was protected from foreign attack by two wide oceans, 9/11/2001 demonstrated how vulnerable the homeland—a word rarely employed before that time—was to clever if accident-prone fanatics. That both these episodes could have been prevented, that with 20-20 hindsight the most fundamental aspects of security were breached, is not a new phenomenon in the history of the U.S. and other great powers. Historical calamities, however destructive, most often are like personal disaster, are the result of pervasive stupidity—even in political circles.

But “Ebola” has taken on grandiose proportions, whether indeed an epidemic materializes in the U.S. With near panic in some quarters, and certainly with the full faith and credit of the 24-hour media, the internet, and its new bastard offspring, the social networks, the American public is being bombarded with the imagined reality of an Ebola epidemic in the U.S.

What is obvious if yet widely still unacknowledged, is that Americans are getting demonstrable proof that even “local” epidemics in as isolated parts of the world as tropical west Africa are a threat to American domestic peace and stability. (There may be some irony in the fact that Liberia owes its founding to Americans. Monrovia, its capital, named after James Monroe, one of the Founding Fathers and the fifth U.S. president, was an ardent supporter of freed American black slaves colonizing the area.)

The world intrudes, whether the delivery of a poisonous Brazilian Wandering spider with his tropical fruit to an unsuspecting British householder using internet delivery or the spread of one of the several killing hemorrhagic fevers of Africa (including Ebola) for which science does not yet have a defense through the growing worldwide migrations for business and pleasure.

Isolation is a thing of the past. The old-fashioned and somewhat effective method of quarantine so long used against disease contagion and infection becomes problematical in a world where one aircraft not only hosts 100 passengers or more but where it is run through a half dozen airports in all directions within 24 hours.

The burden, then, of being one’s brother’s keeper not only becomes a laudatory moral precept but a necessary function if such pandemics are not increasingly to spread worldwide. That is not only in terms of helping to prevent the suffering and death of disease of West Africans is already demonstrating, but in terms of the world economy and individual livelihood. Firestone’s hospital on its 100-year-old leased lands in Liberia which have long been the beginning of where the rubber meets the road in America are going to have to take on new duties [and costs]. Exxon’s postponed drilling in West Africa, including Nigeria which until recently supplied 10% of American oil imports, is going to effect cascading world energy prices.

Whatever its costs, by mid-October 2014 Ebola has become a notorious American household word. That infamy is likely to grow whether or not the virus spreads in the U.S. because the pandemic will continue to rage in Liberia, Sierra Leone and Guinea, and perhaps move elsewhere in Africa. (It takes its name from an identifiable outbreak in the Congo decades ago.) The still collapsing primitive health facilities that existed in West Africa before its onset, the tardiness of promised American aid through U.S. military construction of new health facilities, the lack of a European response, the abysmal failure of the UN World Health Organization—all indicate as much. So long as that is the case, even if the debate ends with a travel ban on these West African states, the threat will continue. (Their isolated jungle borders are commonly crossed by informal migrants. And one can only be suspicious of the claim of a quick end to the spread of the disease to neighboring countries.)

“Security”, therefore, in the new world of mass communication and increasing cheap and swift transportation now takes on new aspects.

* A version of this column will be posted Monday, October 20, 2014, on the website yeoldecrabb.com.