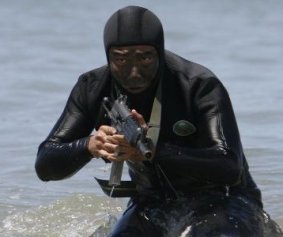 Left: A North Korean commando on an infiltration training mission to South Korea.

Cyberwarfare Threatening U.S. Economy and Free Speech – Rachel Ehrenfeld – Lack of appropriate cybersecurity exposes U.S. vulnerable communications to sophisticated cyberattacks; the fastest and safest venue to attack the U.S. economy, national security, and our right to free expression. Sony’s recent hacking and publication of its files, allegedly by North Korean hackers…. as JP Morgan Chase, the Las Vegas Sands, and other major business, government, and infrastructure cyber attacks could have been prevented, or mitigated, by implementing superior cybersecurity systems. Indeed, the escalation in cyberattacks highlights the sorry state of cybersecurity of American based companies.…more…

Legitimizing Hamas – Rachel Ehrenfeld – The European Union has taken another step, in what it apparently hopes will facilitate the Islamist dream to annihilate the Jewish State of Israel. This step was taken by The General Court of the European Union in Luxembourg, on Wednesday, by removing the Muslim Brotherhood’s Gaza branch, Hamas, from its terrorist designated organization, thus legitimizing a barbaric terrorist group that when allowed, acts like ISIS. The Court, in a press release on December 17, 2014, announced it accepted Hamas contention that the decision to designate it as a terrorist group in 2001, was “based not on acts examined and confirmed in decisions of competent authorities but on factual imputations derived from the press and the Internet.” The court includes a stay on this ruling for a period of three months, in order to allow the European Commission or any of the 28 EU members to file an appeal against the ruling. If no one objects, Hamas can be openly funded and armed to resume its attacks against Israel.…more…

ISIS Propaganda Campaign – Update – Meir Amit Intelligence and Terrorism Information Center – The battle for hearts and minds conducted by ISIS. Detention of an Indian citizen who ran an ISIS English-language Twitter account. Indian police detained a suspect a few days after it was revealed by the British Channel 4 that he was in charge of running ISIS’s English-language Twitter account…Expressions of support to and and solidarity with ISIS in the West.…more…

Hizb-ut-Tahrir Shahada Terror Flag in Sidney – Clive Kessler – Claude Levi-Strauss long ago… declared that “[social structural] models have nothing whatsoever to do with reality; they are simply grounded and built upon it.” Why do I recall this now? Because of the events yesterday at the Lindt Café and the “expert” media commentary upon them.  In that expert analysis there was an uncanny echo of Levi-Strauss. Yesterday’s dreadful events, we were told, “had nothing to do really with properly understood Islam per se,” but were simply an awful gesture spawned from it.  I offer this comment, again, not “to have a go” at Islam, but to make clear why I find so much of the commentary upon it to which our media treat us confused and deficient.…more…

The U.S.-Israel Crisis – Sol Sanders – The United States and Israel are under full sail into a perfect storm. The caterwauling back and forth from the Israeli and Anglo-American left that Prime Minister Netanyahu is inviting Pres. Barack Hussein Obama’s intervention in upcoming Israeli elections as a prop for his popularity are indicative of how far relations have sunk. The Obama Administration, often tone-deaf to the nuances of the Mideast tangle of rapidly shifting antagonisms and tacit alliances, has made an accommodation with Iran its number one regional strategic priority. Washington seems ready to accept “nuclear threshold” — Tehran’s ability to build a bomb but with “proper” mullahs’ guarantees and UN inspection to hold off — as an alternate to total nuclear disarmament. Such an arrangement would establish Iranian jihadist hegemony in the Persian Gulf and the Greater Middle East. .…more…

Following the Turkish Corruption Trail, From Central Asia to the Balkans – Lily Lynch

The SSCI Study of the CIA’s Detention and Interrogation Program: Issues to Consider, CRS Insights, December 16, 2014