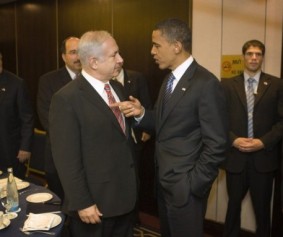 The United States and Israel are under full sail into a perfect storm.

The caterwauling back and forth from the Israeli and Anglo-American left that Prime Minister Netanyahu is inviting Pres. Barack Hussein Obama’s intervention in upcoming Israeli elections as a prop for his popularity are indicative of how far relations have sunk.

The Obama Administration, often tone-deaf to the nuances of the Mideast tangle of rapidly shifting antagonisms and tacit alliances, has made an accommodation with Iran its number one regional strategic priority. Washington seems ready to accept “nuclear threshold” — Tehran’s ability to build a bomb but with “proper” mullahs’ guarantees and UN inspection to hold off — as an alternate to total nuclear disarmament. Such an arrangement would establish Iranian jihadist hegemony in the Persian Gulf and the Greater Middle East.

That comes at a time when Israeli leadership — with the background of The Holocaust — cannot but take Tehran and its allies’ threats to erase it from the map as its most serious security threat. On a shorter timeline, the fact that Tehran now has allies on the Mediterranean to the south and north of Israel building missile arsenals is a present and current danger for Jerusalem and American strategic interests in the region.

The Obama Administration’s reiteration of America’s traditional all out support for the Israeli alliance increasingly ring hollow given Washington’s private asides. Obama’s insistence that negotiations go back to the indefensible pre-1967 boundaries — which received a public rebuke from Netanyahu — poisoned the already difficult personal relations between the two leaders. Nor did open Israeli support for Mitt Romney’s candidacy do more than pour salt in the wounds. Continuing leaks not even officially denied by State and White House spokesmen designed to join up with worldwide criticism of Israeli policy reinforce Jerusalem’s worst fears of White House attitudes.

The Obama Administration’s coolness toward Israel took on new meaning when the “routine” transfer of weaponry from Germany was framed in new red tape during the final days of the last Gaza war. For those with longer memories, it recalled the anomaly of Pres. Richard Nixon — despite his well-known private anti-Jewish comments — mustering a massive weapons airlift for Israeli survival in the surprise 1973 Yom Kippur War in support of American strategic interests.

Now, on the contrary, there is a growing belief both in American Zionist circles and in Israel that only the overwhelming support for Israel among the U.S. public and Congress inhibit the Administration — buttressed by the traditional antagonism toward Israel in the State Dept. — from going further bilaterally and at the UN to pressure Israel for security concessions to an artificial Palestinian state.

Meanwhile, despite its continuing critical dependence on the U.S., the Israeli public — with an increasingly negative view of Obama — is moving away from Washington’s insistence on concessions to the Palestinians. The most recent 50-day Gaza war (after a threat of continual missile fire endangering all Israel) could only be the death knell for any strategy of “land for peace”. Israel’s reward for a withdrawal from Gaza in 2005 has been establishment of a ruthless jihadist Gaza regime which will not make even the perfunctory concession of accepting a Jewish state. Nor can Israelis ignore that in the last (2006) Palestinian elections, Gaza’s Hamas won almost half the parliamentary seats. Elections are now on hold largely because Pres. Mahmoud Abbas knows he could not win against a growing jihadist infiltration even on the West Bank with its short artillery range for Tel Aviv, much less Jerusalem.

There is the likelihood that the March 17 Knesset elections will show a further shift to a more uncompromising Israeli position even in the unlikely event of Binyamin Netanyahu’s replacement as prime minister. There is, objectively, no Palestinian negotiating partner in any event. No Palestinian leader, whatever his true beliefs, feels strong enough to meet any of the earlier concessions the Israelis made on withdrawing from the conquered areas. No shibboleth is as unrealistic as the Americans’ stated purpose to give the Palestinians contiguous areas which would, presumably, mean cutting off the Israelis’ access to the Negev by linking the Gaza Strip and the West Bank.

In an era when everything is being done, not only by the Palestinians but by “the political pilgrims” on the left in the U.S. and Europe who have drifted to their cause, Israel will not abandon claims to its historic roots in a united Jerusalem and Judea and Samaria (“the West  Bank” after the 1946 war over the UN partition scheme). It is there that the Hebrew kingdoms existed in classical Greek and Roman times, not in the plains surrounding present-day Tel Aviv.

The two-state “solution” has always been ephemeral, especially with the Palestinians, the U.S. and the Europeans campaigning against Israeli “settlements” on the West Bank, both as an Israeli defensive strategy and a cultural prop for reestablishing a Jewish state in the Mideast. The obvious question is that if 15 to 20 percent of the Israeli population is to remain Arab (and largely Muslim), how is it that the new Palestinian state should be “Judenrein”?  And, in fact, by the Obama Administration’s making “settlements” the sine non qua of renewed and fruitful negotiations, it condemned negotiations from their outset.

A demographic revolution, which has seen Arab birthrates both inside Israel and in the Occupied Territories fall dramatically, has vitiated the old argument of a larger Jewish state being swallowed in an Arab sea. On the contrary, Israeli birth rates are up, even among the secularized as well as the large haredi [religious] families.

Sec. of State Hillary Clinton’s naïve assumptions about the Arab Spring continue to haunt the Obama Administration. It courts the Muslim Brotherhood, parent of almost all contemporary jihadist terrorism in the region, as a kind of Islamic version of the Christian Democrats, thus alienating the Egyptian military regime (despite reluctantly continuing to give Cairo massive aid). It attempts to appease Turkish Pres. Recep Tayyip Erdogan as he Islamicizes his own country and ignores his NATO membership (except to ask for aid facing a chaotic Syria), ignoring U.S. and European sanctions on both Iran and Russia as well as gross anti-Semitic public utterances and a flirtation with Hamas. The feeble bombing of the Sunni jihadist revolutionaries of ISIL (now followed with a drip-drip of American ground forces back into Iraq), for all Washington’s bombast, puts more questions around Washington policy for America’s traditional Arab allies in the Gulf.

Granted that the morass of Middle East politics would stymie a Solomon (if one dares to use that metaphor!), much less an increasingly lame-duck Obama Administration, now even facing a revolt of Congressional Democrats. But the zigzagging Obama policies, whether on Syria or the new expressions of Islamic violence in Israel and the West Bank, continue energizing Israeli militancy. The outbreak of terrorism inside and outside the Green Line with the tacit inspiration of Abbas’s Arabic statements is dramatizing the crisis even for the befuddled American and European media.

The lack of American resolve in the face of the assassination of its citizens by the jihadists and constant statements equating terrorists on both sides of the Israeli-Palestinian equation further imperil day to day U.S. relations with the Israelis, however historic and intense their intimacy. Without an about-face in Obama policy, which seems unlikely to come quickly if at all, a public breakdown in Jerusalem-Washington relations now seems inevitable.

* A version of this column will be posted Monday, December 15, 2014, on the website http://yeoldecrabb.com/.