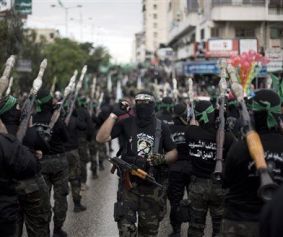 The European Union has taken another step, in what it apparently hopes will facilitate the Islamist dream to annihilate the Jewish State of Israel. This step was taken by The General Court of the European Union in Luxembourg, on Wednesday, by removing the Muslim Brotherhood’s Gaza branch, Hamas, from its terrorist designated organization, thus legitimizing a barbaric terrorist group that when allowed, acts like ISIS.

The Court, in a press release on December 17, 2014, announced it accepted Hamas contention that the decision to designate it as a terrorist group in 2001, was “based not on acts examined and confirmed in decisions of competent authorities but on factual imputations derived from the press and the Internet.”

The court includes a stay on this ruling for a period of three months, in order to allow the European Commission or any of the 28 EU members to file an appeal against the ruling. If no one objects, Hamas can be openly funded and armed to resume its attacks against Israel.

The court’s decision came just days after Hamas celebrated its 27th year, with thousands of armed terrorist marching in Gaza, reaffirming their Charter, “‘The Day of Judgment will not come about until Moslems fight Jews and kill them. Then, the Jews will hide behind rocks and trees, and the rocks and trees will cry out: ‘O Moslem, there is a Jew hiding behind me, come and kill him.’ (Article 7).”

Eager to appease Islamists, the EU court overlooked the fact that Hamas will not be satisfied by only killing the Jews and destroying Israel. But that Hamas’s agenda is to force Islam as the only way of life and the Koran as the constitution,” until Islam is the way of life everywhere in the globe.” This, if the European haven’t noticed, includes Europe.

If one considers the growing influence of the Muslim Brotherhood, Iran and Qatar on European governments and treasuries, increased radicalization of millions of Muslims in the Continent, submission to sharia, and promise for more Arab funding and Iranian business to struggling European economies, and centuries old anti-Semitism, this decision should not be surprising.

All the while, the Obama administration has been publicly pressuring Israel to ignore its security and submit to the PA demands. Yet, the Palestinians, adhere to Hamas notion of “Peace initiatives, and so-called peaceful solutions.”  According to Article 13 of Hamas Charter, Peace initiatives contradict “the principles of the Islamic Resistance Movement.” Accordingly, the only solution for the Palestinian problem…[is] by Jihad. Initiatives, proposals and international conferences are but a waste of time, an exercise in futility.”

Despite all this, the EU can hardly wait to recognize the “State of Palestine” with the jihadist Palestinian Authority, which includes Hamas. On its part, the Muslim Brotherhood friendly Obama administration has never objected to the inclusion of Hamas, a U.S. designated terrorist organization, in the PA, or insisted Hamas changes its Charter.

How long before the State Department follows the European lead to legitimize Hamas? Not long.