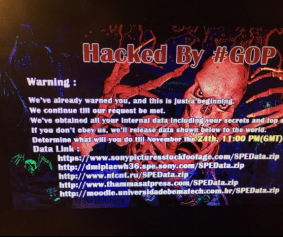 Lack of appropriate cybersecurity exposes U.S. vulnerable communications to sophisticated cyberattacks; the fastest and safest venue to attack the U.S. economy, national security, and even the right to free expression.

Sony’s recent hacking and publication of its files, allegedly by North Korean hackers, has meant heavy short- and long-term damage to the company. Moreover, it has intimidated Sony’s executives into first, toning down “The Interview,” a film describing the fictional assassination of Supreme Leader Kim Jong Un, and today, to canceling the release of the film altogether.

The latest threat of physical damage like the 9/11 attacks by the unidentified hackers, have intimidated Sony’s management enough to to announce “We are deeply saddened at this brazen effort to suppress the distribution of a movie, and in the process do damage to our company, our employees, and the American public.” And while declaring: “We stand by our filmmakers and their right to free expression,” they attempt to distance themselves from their submission to the hackers demand to stop the screening, saying, “we are extremely disappointed by this outcome.”

This hacking, as JP Morgan Chase, the Las Vegas Sands, and other major business, government, and infrastructure cyber attacks could have been prevented, or mitigated, by implementing superior cybersecurity systems. Indeed, the escalation in cyberattacks highlights the sorry state of cybersecurity of American based companies.

We have been are under attack by hackers — state sponsored terrorists, organized criminal groups and individuals for years. Yet the government and the private sector alike have failed to secure our communications, exposing our personal and national secrets, costing untold economic damage to individuals, companies and to our national security,

The CyberSecurity Enhancement Act of 2014, which was passed by Congress on December 12,  has yet to be signed into law by the President. Implementing it will take a long time, and it only addresses the needs of the Federal government. The Act encourages “an industry-driven process for 1) creating voluntary critical infrastructure cybersecurity standards, under the watchful eye of the National Institute of Standards and Technology (NIST),” that will be “non-regulatory, non-prescriptive and technology neutral”; 2) creating coordination and “strengthens cybersecurity R&D;” 3) “boost[ing] cybersecurity education and awareness;” and 4) “advanc[ing]” technical standards.”

Meanwhile, our adversaries continue to encounter vulnerable websites and easy-to-breach cyber security systems, which allow the stealing of data relevant to new cyber security strategies, thus allowing them to maintain their advantages.

There is no public assessment of the damage already done to our defense capabilities, financial institutions, and the economy. The government, if it actually knows, keeps this information from the public. The private sector, for its part, is unwilling to speak publicly about the damages it has suffered, and, unsurprisingly, with little trust in the government, is often reluctant to exchange information.

While details to increase cybersecurity are worked out, the U.S. government, the public, and the private sector are accelerating the pace of moving to wireless communications, leaving very few alternatives, if any, to a time when those will be unavailable due to an attack, or natural disaster.

In the meantime, hackers will continue to use the Internet, websites and social media outlets, to leaking stolen data, including technological innovations, commercial and personal secrets, and financial information.

At the same time, constant incitement online from Islamist and other terrorists will continue to recruit followers and intimidate once proud Americans into greater political correctness and even submission to their demands.

The technological part could be helped by assembling the best and the brightest into a Manhattan-Project-like venture that also develops alternatives that would make our economy and defenses more resilient.  Protecting Americans from threats to their right to free expression demand more than technological advances. That demands a different political and business leadership, one that cherishes our American capitalist and democratic systems, and above all our liberty.