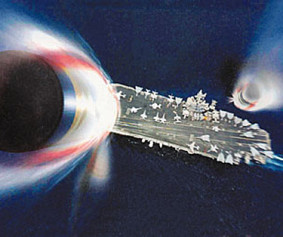 Penny Wise – Flotilla Foolish – Rachel Ehrenfeld – The White House announced the deployment of the super carrier USS George H.W. Bush to the Persian Gulf. This 100,000-ton ship, with its 4.5-acre landing field and a crew of 6,000, has layered countermeasure and defense systems, including surface-to-air missiles and radar-guided Gatling guns (large-caliber machine guns firing over 100 rounds per second). Yet, it faces a real threat from anti-ship cruise missiles that travel 5 times the speed of sound, making them hard to detect, never mind destroy. Such weapons could render the USS George H.W. Bush and other American carriers sitting ducks…RADM Klunder’s name will be associated with getting the first laser weapon system on a ship, But he will be also remembered for cutting the funds for the work on the final stages of developing a real game-changing technology, a deployable Free Laser Electron (FEL) weapon, which he admitted is superior to the SSL.…more…

GPS Purposeful Interference – The Next Generation Urban Weapon of Mass Effect – Rachel Ehrenfeld – We experience everyday interference with our communication systems and devices dependent upon uninterrupted reception of signals from the United States Global Positioning System. If the signals between our GPS satellites and their receiving ground control stations, or the signals from the ground stations, were disabled by jamming or spoofing, the timing signals of all our digital systems will be disrupted. The ever-increasing integration of cyber-architectures with wireless technologies used for our critical infrastructure, communication and transportation systems, financial transactions, and every digital device means we are constantly dependent on uninterrupted GPS signals. However, the scope of this dependency will be suddenly understood only when all these systems and devices completely fail. Take an attack on Manhattan, for example.…more…

The Palestinians’ Latest Blood Libel – Rachel Ehrenfeld – Once again Palestinian chief negotiator Saeb Erekat’s attempt to smear Israel with a blood libel has been exposed by ACD Fellow, Jonathan D. Halevi ( Lt. Col. (ret.). On May 29, 2014, while Mahmoud Abbas was announcing the agreement between Fatah and the Islamist terrorist group Hamas on the appointment of a prime minister to form a unity government, Saeb Erekat, PLO Executive Committee member and head of the Palestinian negotiating team, accused Israel of sabotaging the peace talks with the Palestinian Authority. He claimed that among other things, Israel has been targeting Palestinians for “assassinations” since August 2013, when the talks began, and by the end of May 2014, “killed 66 Palestinians in cold blood.” However, the fatalities’ names and affiliations reveals that Ereket made this up in yet another attempt to portray Hamas as merely another political organization that is not, and has never been, involved in terrorism.…more…

A Euro for Your Thoughts – Sol W. Sanders — The European Union has entered a multifaceted and what promises to be an extended crisis. It will reshape European politics, and its outcome will have far-reaching effects on the world economy and international politics. Resolution of the crisis will come with even more difficulty since the Europeans, for the first time since the end of World War II, cannot count on a strong role of Washington as mediator and mentor. First off, it is important to remember that despite all the propaganda to the contrary about newly arriving power centers — and the weaknesses exposed by its current troubles…more…

Jordan Has a Jihadi Problem Too. Just how large that problem is depends on whom you ask – David Schenker

On Iraq, It Is Amazing What This White House Does Not Know – Walter Russell Mead

Biosurveillance: Observations on the Cancellation of BioWatch Gen-3 and
Future Considerations for the Program – United States Government
Accountability Office Testimony