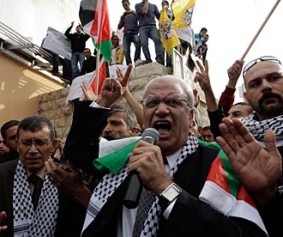 Once again Palestinian chief negotiator Saeb Erekat’s attempt to smear Israel with a blood libel has been exposed by ACD Fellow, Jonathan D. Halevi, ( Lt. Col. (ret.). On May 29, 2014, while Mahmoud Abbas was announcing the agreement between Fatah and the Islamist terrorist group Hamas on the appointment of a prime minister to form a unity government,  Saeb Erekat, PLO Executive Committee member and head of the Palestinian negotiating  team, accused Israel of sabotaging the peace talks with the Palestinian Authority. He claimed that among other things, Israel has been targeting Palestinians for “assassinations”  since August 2013, when the talks began, and by the end of  May 2014, “killed 66 Palestinians in cold blood.”

However, the fatalities’ names and affiliations reveals that Ereket made this up in yet another attempt to portray Hamas as merely another political organization that is not, and has never been, involved in terrorism.

B’tselem, the Israeli ‘human rights’ organization that has a long history of fabricating “evidence” of Israeli “ war crimes” against the Palestinians, the likes that were used for the infamous Goldstone Report, which was exposed by Jonathan D. Halevi,  Lt. Col. (ret.), and ACD Fellow. When exposed, Richard Goldstone, who led the committee that produced the Goldstone report, was forced to admit to the Guardian “if I had known then what I know now, the Goldstone report would have been a very different document.” Moreover, in Washington Post op-ed he admitted that “the allegations of intentionality by Israel … had no evidence.”

B’Tselem listed the names and other details of 43 Palestinians were killed by Israeli security forces in the West Bank and the Gaza Strip from the beginning of August 2013 to the end of March 2014. This list of Palestinian fatalities includes (based on Palestinian sources):

• 8 operatives of al-Quds Brigades, the military wing of the Islamic Jihad

• 7 operatives of al-Aqsa Martyrs Brigades, the military wing of Fatah

• 3 operatives of the Advisory Council of the Mujahideen, a terrorist organization affiliated with al-Qaeda

• An operative of the Mujahideen Brigades

Among the 9 Palestinian fatalities, who were not affiliated with any organization, 3 were killed while approaching the border fence or an Israeli Defense Forces (IDF) post, 3 were killed while taking active part in violent riots, one was targeted after he fired a fireworks gun at Israeli soldiers, and a female toddler was killed by IDF responsive fire aimed at a Palestinian sniper who had shot to death an Israeli citizen a short time earlier.

This recent blood libel against Israel is constant with Erekat’s attempt to whitewash Hamas. On April 5, 2014, at a conference in Ramallah on the  Palestinian “resistance strategy,” he declare[d] to all the world, in the name of President Abu Mazen [Mahmoud Abbas] and of the [PLO] Executive Committee, that the Hamas movement is a Palestinian movement, and that it has not been and will not be a terror organization.”

Erekat reiterated this claim in an April 27 interview to the Israeli Ynet site, saying, “We [the PA] do not regard Hamas as a terror organization” but rather as a “political organization.” In another interview to the Al-Shams radio station on May 8, Erekat said, “Hamas is a political and not a terrorist movement.”

In backing the new PLO-Hamas unity government, the Obama administration contradicts itself  once again. This time it belittles its own terrorist designation list, by accepting Hamas, which  immediately saw this as an encouragement, and announced its plan to push the its agenda in the West Bank.