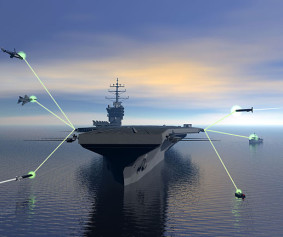 The escalation of the sectarian fighting in Iraq has led the White House to announce the deployment of the supercarrier USS George H.W. Bush to the Persian Gulf.

This 100,000-ton ship, with its 4.5-acre landing field and a crew of 6,000, has layered countermeasure and defense systems, including surface-to-air missiles and radar-guided Gatling guns (large-caliber machine guns firing over 100 rounds per second). Yet, it faces a real threat from anti-ship cruise missiles that travel 5 times the speed of sound, making them hard to detect, never mind destroy.  Such weapons could render the USS George H.W. Bush and other American carriers sitting ducks.

Were this action postponed to the end of this summer, the U.S. Navy would have the USS Ponce (named after the city of Ponce in the Commonwealth of Puerto Rico, which was named after Puerto-Rico’s first governor, Juan Ponce de León), in the Persian Gulf, armed with a Solid-State Laser (SSL) Weapon System. Though the SSL has been praised by Rear Admiral Mathew L. Klunder, Chief of Naval Research, as capable “to meet gaps in ship self-defense against armed Fast boats and unmanned aerial vehicle threats,” the SSL will not be very effective weapon in a bad weather or against sophisticated anti-ship cruise missiles.

In his written statement before the Defense Subcommittee of the Senate Appropriations Committee on May 14, 2014, RADM Klunder said: “Development continues on Free Electron Laser technologies for long-term solutions requiring power levels beyond that which Solid State Lasers can deliver.

While the Rear Admiral’s name will be associated with getting the first laser weapon system on a ship, he will be also remembered for cutting the funds for the work on the final stages of developing a real game-changing technology, a deployable Free Laser Electron (FEL) weapon, which he admitted is superior to the SSL.

It appears that  when Klunder informed the Senate that “development continuous on Free Electron Laser technologies,” he already decided to allocate only $670,000, which is not enough to advance the project but, rather, will be sufficient to close it down. Apparently, he argued that the FEL weapon that was successfully developed over the last five years, at the cost of $28 million at Los Alamos National Laboratory, would be now too costly to advance into a deployable weapon. This decision may save a few million dollars. But it postponed the adaptation of the FEL weapon by the Navy anytime soon, thus increasing the risk to U.S. aircraft carriers and other naval vessels, especially when operating in constrained areas such as the Straits of Hormuz. China, in the meantime, is fast developing a similar system, with no budgetary constraints.

Writing in Los Alamos Security Science Magazine, Octavio Ramos Jr. described how the FEL weapon could be Blasting Missiles Out of the Sky:

“One of Los Alamos’ core capabilities is accelerators. And it is not just about operating advanced accelerators, like those at LANSCE—it’s about our people thinking about the future uses of accelerators. For example, we can think about potential accelerator-based weapons of the future. How about powering a free-electron laser so that it can blast missiles or other threats out of the sky? Well, such power requires an accelerator. Our understanding of accelerators makes such innovations possible.” —Terry Wallace, Principal Associate Director of Global Security

Ships in the United States Navy are armed with a variety of weapons, including 5-inch guns, vertical-launch missiles, advanced antisubmarine torpedoes, and cruise missiles like the Tomahawk. To defend against antiship cruise missiles, ships use a layered defense strategy that consists of surface-to-air missiles for medium-range defense and radar-guided Gatling guns (large-caliber machine guns firing over 100 rounds per second) that are used as a close-in weapon system to counter any threats that have penetrated the ship’s outer defenses.

In collaboration with the Office of Naval Research (ONR), Boeing Company, other national laboratories, and industrial and academic partners, Los Alamos National Laboratory and its Accelerator Operations Technology (AOT) Division, at the Los Alamos Neutron Science Center, are developing a potentially effective countermeasure against antiship cruise missiles and other threats by using free-electron lasers (FELs). Because an FEL’s photons—the concentrated particles of light composing the laser beam—have the potential to be powerful enough to destroy cruise (and ballistic) missiles many miles away, FELs are called the Holy Grail of military lasers.

AOT’s photoelectron injector in its laboratory at LANSCE. This first-of-a-kind injector has the potential to generate electron beams with the requisite brightness and average current to drive high-power megawatt FELs. Because the laser power of an FEL is not amplified with a solid, liquid, or gas, there is no waste heat that is generated or absorbed, meaning that there are no large heat-management issues to mitigate onboard a ship.

Researchers at AOT recently built and successfully tested an advanced injector—a key FEL component—that produced a beam of electrons powerful enough for a megawatt-class (one million watts) antimissile FEL weapon. In an FEL, the electrons are produced in an electron injector and injected into a particle accelerator, which kicks them up to fantastically high energy levels. “We accelerate the electrons through a series of radio frequency (RF) cavities, known as RF accelerators, to almost the speed of light. The resultant energy of the electrons ranges from tens of millions to hundreds of millions of electronvolts,” says Dinh Nguyen, who co-leads the Laboratory’s FEL research team. These electrons are used to create the high-powered photons that make up the precise and concentrated beam of light of the FEL. “Our injector increased the electron beam current by a factor of 10 over what was previously demonstrated. A megawatt FEL is no longer theoretical.”

This is “a major leap forward for the [FEL] program,” says Quentin Saulter, the ONR’s FEL program manager. 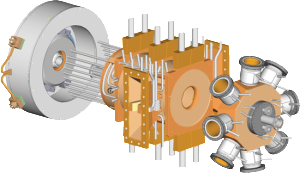 AOT’s photoelectron injector is an essential component of the FEL the Boeing Company is building for the Navy. A schematic of the injector is pictured here. This injector can operate continuously, meaning the FEL can fire continuously and destroy multiple targets. An FEL can theoretically be increased in power from 10 kilowatts to 1 megawatt without increasing the size of the system. The FEL’s power can also potentially be scaled up from 1 to many megawatts. –Dinh Nguyen

“You need megawatts of laser power to destroy a cruise missile,” says Nguyen. “The laser kills with heat. Extreme heat destroys the missile’s mechanics and electronic guidance systems, making it aerodynamically unstable so it tumbles wildly out of control. Extreme heat can also ignite the missile’s fuel, causing it to explode. But there’s not much time to heat up a missile. You need a tremendous amount of heat, like that from a megawatt laser, and a beam several feet in diameter to cook something like a missile that quickly.” He adds, “Imagine being able to use a ‘super blowtorch’ to destroy something that’s miles away…”

Unlike other weapons, an FEL can fire continuously. “It’s like having a gun that never runs out of ammunition,” says Nguyen. There would be no reloading between shots. In the laboratory, FELs have operated continuously and reliably 24 hours a day—for months. FEL technology allows destruction of multiple targets at the speed of light, all day and all night.

No wonder the FEL is described by the ONR as “game changing.”

The FEL is an ideal countermeasure for ships because its beam can be optimized for varying atmospheric conditions at sea. For example, substances in the atmosphere— particularly water vapor, but also smoke, salt particles, dust, pollen, and other pollutants—absorb and scatter light. At sea, absorption by substantial amounts of water vapor is a particular problem for lasers. The problem of light absorption increases as the distance the light travels increases, reducing a laser’s effectiveness against distant targets.

Yet, there are wavelengths of light in the electromagnetic spectrum where light absorption by water vapor is markedly less, creating a window in the vapor for the light to pass through. These windows change along with atmospheric changes. Current non-FEL missile-defense laser technology is hampered because these lasers have fixed wavelengths; if a beam’s wavelength matches that of the water vapor, there is no window: the laser is absorbed. Because these conventional lasers operate at only specific, fixed wavelengths, they cannot be adjusted to compensate for atmospheric changes.

The development of FELs could lead to significant changes in naval tactics, ship design, and the overall types of ship-based weapons—together these would mean a radical technological shift for the Navy. No wonder the FEL is described by the ONR as “game changing.”

FELs would not be as big a drain on a ship’s electrical energy as other types of lasers are, a boon because ships need that energy for propulsion and the operation of other weapons systems. This energy saving is because conventional lasers rely on a solid (such as glass or a crystal) or a gas as the “gain medium.” The gain medium is the material lasers use to amplify their power. The FEL is unique because it uses a completely different technology to produce its beam of light. It uses accelerated unbound electrons (“free” electrons) as its gain medium. The electrons are created by a photocathode inside an injector—a photoelectron injector—and are then injected into the particle accelerator. “The photoelectron injector was invented at Los Alamos,” explains Nguyen. “Electrons make a high-gain medium, which makes a powerful FEL possible. Using this technology, it becomes feasible to amplify 1 watt to 1 megawatt!” These waves of electrons, traveling at the speed of light inside the accelerator undulate between a series of alternating magnets, which causes the electrons to emit the powerful beams of photons.

The Navy estimates the “cost per shot” of a laser at less than a dollar: missiles used for ship defense cost $800 thousand up to $15 million dollars each.

The Navy estimates the “cost per shot” of a laser at less than a dollar: missiles used for ship defense cost $800 thousand up to $15 million dollars each. Compared with conventional antimissile weapons systems in deployment, the FEL would be the most efficient and the most cost-effective.

Because of LANL scientists’ expertise and innovations in accelerator science, and because of their access to a high-powered accelerator and its infrastructure, the members of the FEL team provide the science and technology behind the FEL program’s injectors, accelerators, and amplifiers. Their contribution to the final engineering design of the prototype FEL system is expected this spring. The next phase for the Boeing-led FEL program’s collaborators is to build and assemble a full-power prototype. The prototype will be assembled and tested at LANL.

“We are winning the battles of the future in the laboratories of today,” says ONR’s Saulter. “If we do the investments now, if we do the science, if we do the engineering, then our future is secure.”

To see the Office of Naval Research’s video regarding FEL development, go yo YouTube https://www.youtube.com/watch?v=fWdGkb7r1iA