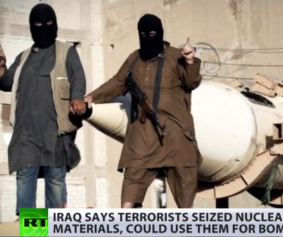 WMD and the Islamist Threat – Cory Davenport – The ability for terrorists in the Middle East to get their hands on WMDs has never been greater. It might be easy to look at Libya, which in 2003 agreed to the ending and dismantling of its WMD programs, or at Syria, which in 2013 agreed to the destruction of its chemical weapon stockpiles, and think that there has been significant progress made on the non-proliferation front in the Middle East.While the destruction of hundreds of tons of chemical agents is certainly a sign that some progress is being made, we must remain cognizant of the fact that the danger is far from eliminated.First, large amounts of chemical agents and nuclear materials exist throughout the Middle East.  Second, additional agents and materials have likely not been declared by the nations in possession of them or are simply unknown to those and other nations (e.g., forgotten-about chemical agent bunkers in Albania rediscovered in 2002)…more…

Israel Cannot Afford Obama’s Islamist Appeasement – Rachel Ehrenfeld – Nor can the U.S… The ability of the Jews in their State of Israel to defend themselves against an ongoing barrage of missiles fired by Hamas and other Palestinian terrorist groups in Gaza has lifted the thin veil of supposed objectivity claimed by major media outlets. Instead of condemning Hamas and other Palestinian terrorist groups for terrorizing a country with 8,180 million people (6,135 million Jews; 1,694 million Arabs, and 348,000 non-Arabs) and holding them responsible to all of the casualties both in Gaza and in Israel, the Washington Post is protesting against “The lopsided death tolls in Israel-Palestinian conflicts.” Time saying, “Civilian Casualties Rise as Israel Hammers Gaza From the Air,” audaciously claims Israel is to blame for Hamas’s desire “to hit Israel any way they can, and the way that works best is missiles.” And the New York Times, commiserates: “For Gazans, a Tense and Somber, Ramadan.” The obscene refusal to point the finger at the cause for all this — Hamas — attests to the success of Hamas’s and the Palestinians’ virulent decades-long anti-Israeli propaganda campaign. The media, and U.S. President Obama, have failed to tell Hamas “Stop shooting! Stop attacking Israel and stop ordering Gaza residents to ignore Israeli warnings.” Instead, Obama and the media call on Israel to stop defending its citizens, i.e., stop retaliating against Hamas.…more…

Israel: Remaking the Mideast Again? – Sol Sanders – Events are drawing Israel into a major war with neighboring Arab terrorist organizations to result in another total reordering of Mideast relationships. Comparison of the current scene with the eve of the Six Day War in 1967 is almost unavoidable. Then, too, a reluctant Israel waged a preemptive action because of what it saw as an existential threat from an alliance of Arab neighbors. As great as the possibility for another complete regional re-dispositioning is, the outcome of events is even more unpredictable than it was in 1967. Today’s situation is vastly different…more…

Death Throes and Other Middle Eastern Phenomena – Norman Bailey – With Hamas in its death throes firing off rockets in all directions, it is hard to concentrate on anything else. Nevertheless, contrary to what the U.S. government might think, events in this part of the world do not, in fact, revolve around Gaza, Hamas, the Palestinian Authority, settler communities, or Fatah.  Let’s see: The leader of the “Islamic State” (IS), the territory of which for the time being encompasses northern and western Iraq and parts of eastern Syria, Abu Bakr al-Baghdadi (a “nom de guerre”) head of IS, proclaimed himself Caliph of Islam.  The Sunni Muslim Arab Caliphate existed from the seventh century c.e. to less than a hundred years ago, when it was abolished by the Turkish National Assembly and the last Caliph sent into exile.  The first Caliph was named Abu Bakr, which is undoubtedly why the head of IS adopted the name.  The position of Caliph, the spiritual leader of the Arab Sunnis, was never recognized by Muslims east of Iran or by Sh’ia Muslims, but always claimed authority over all Muslims.  Some other Jihadi organizations have recognized IS and Abu Bakr, but it is a sure bet that the great majority will not. In an unlikely alliance of convenience the U.S., Russia and especially Iran are trying to help the Maliki government in Baghdad to stage a counterattack against IS, and chances of success are quite good, especially since they have an air force and IS does not.  But fighting will likely be prolonged…more…

The “Cold Peace” Option – Dr. Aaron Shenhar – How Can the U.S. Restore its Power and Pride, and Prevent Immense Suffering Down the Road? U.S. foreign policy today is inconsistent, passive, and at best, reactive. More important, it is hurting the free world and U.S. interests in the long run. With recent events in Europe, Asia, and the Middle East, the world is more dangerous today than it was just a year ago. When the U.S. is closing 22 embassies because it is not sure it could protect them, you know that something is wrong; when a Russian president is snatching a piece of another country without even blinking, you know that something is wrong; and when a Syrian president is chemically poisoning thousands of people without being punished, you know that something is wrong. However, this is just the beginning – with the newly formed terror country in Iraq, we should expect more troubling signs. The writing is on the wall, and to a great extent, inevitable – largely, as a result of U.S. policies. So what is the alternative? Is there a better way? I contend, there is – and perhaps not surprisingly, it has to do with human nature.…more…

The Truth About Iraq. And why it matters. – Dick Cheney, Liz Cheney

America Is the Arsonist of the Middle East: John Kerry’s failed peace negotiations set off the spiral of violence between Israel and the Palestinians – Lee Smith

Why We Need to Spy on the Germans – James Kirchick

Anti-Semitism on the Rise in Sweden – THE AMERICAN INTEREST

Challenges at the Border: Examining the Causes, Consequences, and Responses to the Rise in Apprehensions at the Southern Border – Committee on Homeland Security & Governmental Affairs – July 9