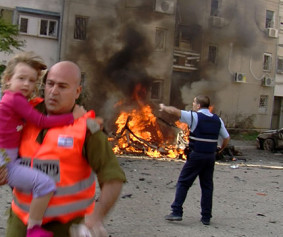 The ability of the Jews in their State of Israel to defend themselves against an ongoing barrage of rockets fired by Hamas and other Palestinian terrorists in Gaza has lifted the thin veil of supposed objectivity claimed by major media outlets.

Instead of condemning Hamas and other Palestinian terrorists for terrorizing a country with 8,180 million people (6,135 million Jews; 1,694 million Arabs, and 348,000 non-Arabs), and holding them responsible to all of the casualties both in Gaza and in Israel, the Washington Post is protesting against “The lopsided death tolls in Israel-Palestinian conflicts.” Time’s “Civilian Casualties Rise as Israel Hammers Gaza From the Air,” audaciously claims Israel is to blame for Hamas’s attacking “Israel any way they can, and the way that works best is missiles.” And the New York Times, commiserates: “For Gazans, a Tense and Somber, Ramadan.” The obscene refusal to point the finger at the cause for all this — Hamas — attests to the success of Hamas’s and the Palestinian’s virulent decades-long anti-Israeli propaganda campaign.

Like the media, U.S. President Obama, has failed to tell Hamas “Stop shooting! Stop attacking Israel and stop ordering Gaza residents to ignore Israeli warnings.” Instead, Obama and the media call on Israel to stop defending its citizens, i.e., stop retaliating against Hamas.

Yossi Kuperwasser, director general of Israel’s Ministry of Strategic Affairs, told Time’s reporter, “We have to make sure that we end this confrontation with a clear result, that Hamas stops the launching of rockets and terrorist attacks on Israel, and that it has no appetite to resume these kind of activities in the future. That is the goal of this operation.”

Time and again Israel has caved in to U.S. and European pressure. American-dictated “cease-fire” has only lead to increased Palestinian terrorism, by Hamas, the PLO, or others. It’s time Israel’s Prime Minister Bibi Netanyahu does not cave in to American, or “world opinion” pressure. He and the country he leads cannot afford it anymore.

For too long Israel has jeopardized its national security by oversimplifying Palestinian terrorism. Fed up with wars they deluded themselves again and again that the Palestinians also wish to raise their children peacefully, develop businesses and become good neighbors. This wishful thinking led to ” the credulous notion that “talking minimizes shooting,” wrote Ambassador (ret) Yoram Ettinger, in Israel Hayom.

He then pointed out what should should have been by now obvious to Israelis and Americans, that  “An effective war on terrorism must be offensive and military rather than defensive and diplomatic; preemptive and preventive, not retaliatory; comprehensive, disproportionate and sustained, not surgical, restrained and limited; preventing the gun from reaching the hand, not waiting for a smoking gun; long term security-oriented, not short term convenience-driven; overriding and facilitating the peace process, not subordinated by the “peace process”; at any price and not deterred by the price (no pain, no gain); operating at the breeding ground of terrorism, not through remote-control; in defiance of global pressure and condemnation, not subdued by Western policy and public opinion; a war pursued until total submission by terrorists, not a war of attrition. Ceasefire/containment is no longer an option!”

Islamist terrorist, the likes of Hamas, Hizballah, The Islamic State of Iraq, al Qaeda and others, with growing numbers of Western educated members, whose brutal mission is to eliminate the enemy (Infidels, Israel and the U.S.) and frighten everyone else into submission, use 21st Century technology to drag the world back to the dark days of the 7th Century.

We must win back our civil and human liberties and control of our economies. The only way to stop the Islamist murderous troops of darkness is by fighting to win.