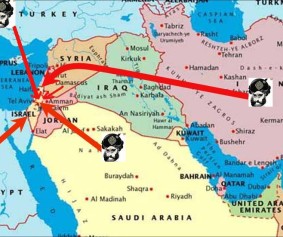 Events are drawing Israel into a major war with neighboring Arab terrorist organizations to result in another total reordering of Mideast relationships.

Comparison of the current scene with the eve of the Six Day War in 1967 is almost unavoidable. Then, too, a reluctant Israel waged a preemptive action because of what it saw as an existential threat from an alliance of Arab neighbors.

As great as the possibility for another complete regional re-dispositioning is, the outcome of events is even more unpredictable than it was in 1967. Today’s situation is vastly different:

First, Egypt, the largest and traditionally the leading Arab state, will not be the tripwire which brought on Israel’s preemptive strike then. This time Cairo could well be a benevolent neutral if not an ally in any new encounter between Israel and its principle enemy, the radical Arab Islamists. Cairo’s military junta is waging a ruthless campaign against the jihadists, voted into power but which it dislodged with considerable popular support.

Second, the prospect of a intervention by the Soviet Union is missing — and a clash of the, then, two superpowers — which hung over the earlier events. Russian President Vladimir Putin’s nuclear arsenal notwithstanding, his ability to influence events in the region with conventional military forces and aid is marginal. In part, that is because his imbroglio in Ukraine – having produced early victories – is now turning into a Russian disaster.

Third, the ambivalent position of the Obama Administration despite all its public protestations of loyalty to a U.S. ally, is a sharp contrast to President Lyndon Johnson’s profound pro-Israel sympathies at a time when the U.S. Left had not made a bogus Palestinian crusade a central issue.

And, fourth, there is a new aggressive and potentially nuclear-armed Iran, dedicated to the destruction of Israel, mobilizing long suppressed Shia minorities throughout the region in a Muslim sectarian conflict. Tehran’s mullahs have been able to bridge the historic Arab-Persian divide to bolster Arab Shia and even non-Shia allies.

Instead of the pan-Arab ideology so successfully evangelized by the charismatic Egyptian leader Gamal Abdel Nasser — however dented by the earlier Egyptian defeat in 1956 — the cement of any anti-Israel alliance today is radical Islam. Rather than the artificial national entities mapped out by the World War I victors, Jerusalem today faces on all sides fanatical regional guerrilla organizations evolved into threatening major organized terrorist entities.

In the south, Hamas, a child of the Sunni Muslim Brotherhood so favored by the Obama Administration as a “moderate” political force, has crossed over the sectarian line in the past to accept Iranian aid. Despite what is a tacit combined Israeli and Egyptian embargo, it has accumulated a growing and increasingly sophisticated arsenal. In the north, the Hezbollah with its roots in southern Lebanon, is now bloodied with its significant participation with Iran in salvaging the Assad regime in Syria. Both these organization now could inflict far more pain on Israel’s civilian population than the artillery, mortar and rocket attacks of ’67.

On the east, the always fragile Jordan, beset with enormous destabilizing refugee flows from both Syria and Iraq and the growing seduction of its own majority Palestinians by the radical Islamists, now faces the ultra-fanatical Islamic State of Iraq and the Levant on its once secure border with Iraq. ISIL’s claim to restoration of a trans-national caliphate, a Muslim empire headed by a religious figure invoking 7th century codes of justice, may not be sustainable. But its announcement in the half of Iraq it tentatively controls with like-minded allies is a powerful rallying cry for traditional Muslim jihad, holy war against all “non-believers”. That appeal to ruthless and bloody fanaticism, always just below the surface in traditional Islam with its validation in Koranic text, is cutting through yesterday’s regional allegiances.

Washington has not caught up. Obama’s tentative choice to meet the new threat in the area incrementally — dribbling advisers to a crippled Baghdad government — is not likely to stem the tide of success against the jihadists’ bandwagon. There is already evidence that the new ultra-radical Muslims have adherents in both the Israeli-Occupied West Bank and under relatively more moderate Hamas’s nose in Gaza. Washington indecision confirms the belief throughout the umma (the Muslim world) that the U.S. is no longer the major factor in the region’s power struggles. They see an American retreat providing the opportunity for dedicated minorities to determine events.

Thus, Israel faces the same dilemma as in 1967, that is, whether to wait for the always powerful fissiparous tendencies of Arab and Muslim societies to tear themselves apart or to move before a new and aggressive enemy tyranny consolidates. In that earlier conflict, by happenstance as much as design, Israel established itself as the region’s military “superpower”. That, in turn, produced (however recalcitrant and imperfect) peace treaties with Egypt and Jordan. Their defection from the anti-Israel front formalized the division of the Arabs despite their profession of unity which had been one of the sources of the Israeli victory.

Today the Arabs are no less divided. And, in fact, the Syrian civil war has not only set Muslim fanatics against a pretended secular –if dictatorial — regime, but because of Damascus’s Alawite (an offshoot of Shia) leadership and the Iranian Shia mullahs’ support, it has set off a new regional test between the majority Sunni regimes and long-oppressed Shia Arab minorities.

Their tactics, claiming as many Muslims as non-Islamic lives — from suicide bombings to kidnappings — strike deep at the vulnerability of Israel’s Western-style civil society  And whether targets are a relatively new light-rail system in Jerusalem or vacationers on a foreign beach, Israel’s growing prosperity and sophistication as a leading world industrial society make it all that more susceptible.

Ironically, Israeli leadership today — while as contentious and disputations as ever — is probably freed from two of the principal concerns on the eve of the Six Day War in deciding strategy. Regard for the UN — even then under the hapless leadership of Secretary General U Thant — is less a consideration. UN peacekeeping in the region, as elsewhere, has come and gone with little if any effect. One suspects, too, that despite frequent public obeisance to the Obama Administration for the U.S.’s invaluable source of military hardware, no one in Jerusalem is blind to its pro-Muslim sympathies and its incompetence.

Obama’s insistence on prioritizing Jewish settlements in the traditional sites of the ancient Hebrew kingdoms, the basis of Israel’s legitimacy, was a guarantee of failure of Israel-Arab negotiations. (No one seems to ask if there is to be a two-state solution with a 1.8 million Israeli Arab minority, are Jews to be excluded from the proposed Palestinian state?) In continuing to insist on direct negotiations between Prime Minister Benjamin Netanyahu and Palestinian President Mahmoud Abbas, who has had to concede the growing power of the Islamists by a coalition government with Hamas, Obama and Secretary of State John Kerry appear totally at sea in the Arab desert.

Yet Jerusalem has other deepening concerns. The kidnapping and murder of three Israeli teenagers and a subsequent kidnapping and brutal murder of an Arab teenager — perhaps by Israeli vigilantes in retribution — are dramatizing the deterioration of the domestic scene. The civil strife in predominantly Arab northern Israel is further evidence. The fact that Hamas cannot or will not control escalating missile strikes against southern Israel and the new ISIL threat to Jordan are forcing the Israelis into consideration of more dramatic action to preserve their stature. While future action might become a full-fledged invasion, or even reoccupation, of Gaza, it is likely, as in 1967, to coincide with developments on the other “fronts”.

Assuming the Israeli military superiority, including the tacit endorsement of Cairo and the Gulf states to action against the jihadists, a new perspective would unroll in the Mideast. But given the incredible complex of cross-currents (as in 196&) the outcome is totally unpredictable.

* A version of this column will be published Monday, July 7, 2014, on yeoldecrabb.com.