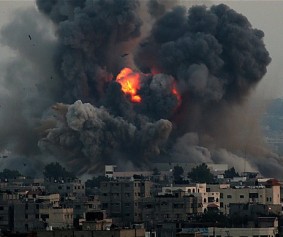 With Hamas in its death throes firing off rockets in all directions, it is hard to concentrate on anything else.

Nevertheless, contrary to what the U.S. government might think, events in this part of the world do not, in fact, revolve around Gaza, Hamas, the Palestinian Authority, settler communities, or Fatah.  Let’s see:

The leader of the “Islamic State” (IS), the territory of which for the time being encompasses northern and western Iraq and parts of eastern Syria, Abu Bakr al-Baghdadi (a “nom de guerre”) head of IS, proclaimed himself Caliph of Islam.  The Sunni Muslim Arab Caliphate existed from the seventh century c.e. to less than a hundred years ago, when it was abolished by the Turkish National Assembly and the last Caliph sent into exile.  The first Caliph was named Abu Bakr, which is undoubtedly why the head of IS adopted the name.  The position of Caliph, the spiritual leader of the Arab Sunnis, was never recognized by Muslims east of Iran or by Sh’ia Muslims, but always claimed authority over all Muslims.  Some other Jihadi organizations have recognized IS and Abu Bakr, but it is a sure bet that the great majority will not.

In an unlikely alliance of convenience the U.S., Russia and especially Iran are trying to help the Maliki government in Baghdad to stage a counterattack against IS, and chances of success are quite good, especially since they have an air force and IS does not.  But fighting will likely be prolonged, and the great attraction for many Sunni Arabs of the restoration of the Caliphate should not be underestimated.

For Israel, which has no dog in that fight, the greatest danger would come from an IS attack on the fragile Hashemite regime in Jordan. A takeover of Jordan by the extremists or even a civil war Syrian-style would vastly complicate the task of the Israeli security and defense forces, already severely stretched.

Farther east and north, the Kurdish Regional Government (KRG) of the Iraqi Kurds is in limbo, making deals with Turkey to transport its oil and greatly increasing its reserves of oil by seizing the Kirkuk fields.  The KRG itself appears uncertain about whether it should declare independence or not, encouraged to do so by Israel and discouraged from doing so by the United States.

On the Kurdish front, the overlooked Kurds of Iran, a sizable minority, are growing restless and beginning to demonstrate in favor of ethnic autonomy.  The Iranian security forces are predictably reacting with disproportionate violence.

The al-Sisi government in Egypt has taken an extremely significant step towards economic rationality by removing energy subsidies, which has increased prices by about seventy percent.  This a necessary measure neither Mubarak or Morsi had the courage to take.  It now remains to be seen whether the courage of the regime stretches to eliminating or reducing the bread subsidy, a measure that should be taken along with many positive steps, such as consolidation and modernization of Egyptian agriculture, for  millennia the breadbasket of the Mediterranean world but now barely able to cover half of requirements.  Needless to say, what happens in Egypt is as important to Israel as what happens in Jordan.

The situation in Libya has degenerated into utter chaos and anarchy.  It is no longer a state (like Syria and Lebanon), there is no central state authority at all.  The Tunisian government has convened a conference of all the countries that border on Libya to try to decide what to do about it. Results of the conference, if any, will be most interesting.

In short, there is much more going on in the neighborhood than rocket attacks from Gaza.

* Norman A. Bailey, Ph.D., is Adjunct Professor of Economic Statecraft at The Institute of World Politics, Washington, DC, and teaches at the Center for National Security Studies and Geostrategy, University of Haifa.

Some form of this column will appear in Globes.