WMD and the Islamist Threat – An ACD Exclusive 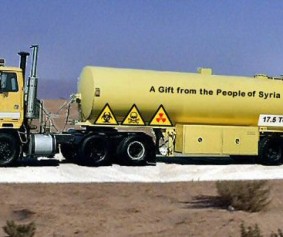 The ability for terrorists in the Middle East to get their hands on WMDs has never been greater.

It might be easy to look at Libya, which in 2003 agreed to the ending and dismantling of its WMD programs, or at Syria, which in 2013 agreed to the destruction of its chemical weapon stockpiles, and think that there has been significant progress made on the non-proliferation front in the Middle East.

While the destruction of hundreds of tons of chemical agents is certainly a sign that some progress is being made, we must remain cognizant of the fact that the danger is far from eliminated.

First, large amounts of chemical agents and nuclear materials exist throughout the Middle East.  Second, additional agents and materials have likely not been declared by the nations in possession of them or are simply unknown to those and other nations (e.g., forgotten-about chemical agent bunkers in Albania rediscovered in 2002).  Syria, for example, has been accused of not having declared all of its chemical weapons sites and stockpiles to the UN.  This possibility certainly seems credible in light of Syria’s illicit use of chemical weapons against civilians in its current Civil War and the IAEA vote of Syrian non-compliance regarding an undeclared nuclear reactor in 2011. Finally, the smuggling of illicit goods, including WMD agents and materials, is a relatively common occurrence in the Middle East.

The problem of smuggling in the Middle East is well known.  Whether the activity is human trafficking, or smuggling of drugs, money, arms, counterfeit consumer goods, or WMD materials, the problems are the same–porous borders, government inattention and corruption, and large numbers of people looking to move illicit goods.  Very often, the routes used to smuggle WMD materials are the same as those used for other illicit goods, and terrorists frequently partner with professional smugglers when they have goods that need to be smuggled.  Regardless of what is being smuggled, smugglers prefer when there is conflict and instability within a nation as this tends to reduce government focus on border security and to increase opportunities to take advantage of corrupt officials.

Instability in the Middle East has increased dramatically since the end of 2010.  Subsequent to the onset of the Arab Spring, four nations have forcibly removed their leaders from power: Yemen, Egypt (twice), Tunisia, and Libya.  Most other nations in the Middle East have experienced a sharp rise in civil protest, often involving violence.  These actions have resulted in governments shifting their priorities to focus more on domestic stability and less on security measures that are only tangentially related, like on externally-focused espionage and border security.  The traditionally porous borders of many of these nations are, as a result, as open as ever.  In fact, there is already evidence that at least some forms of smuggling, most notably of drugs and arms, have increased well beyond pre-Arab Spring levels.

In addition, conflict and instability can make military sites desired targets for attack, including sites that contain WMDs or their precursors.  An example of this can be seen in the recent capturing of the Muthanna chemical weapons complex in Iraq by IS.

The second factor increasing the likelihood terrorists in the Middle East will acquire a WMD is the extent to which intra- and inter-group competition is taking place within and between these groups.  An example of intra-group competition can be seen in some of the past activities of the East African terrorist group, al-Shabaab.  Specifically, it has been posited that al-Shabaab’s attack on the Westgate shopping mall in Nairobi, Kenya was largely motivated by one faction’s attempt to demonstrate superiority over another.  As an example of inter-group competition, when Lashkar al-Tayyiba began losing members to AQ, they decided that a large scale attack would be a good way to attract new members. In 2008, they launched a series of attacks throughout Mumbai, India, killing over 160.

One need only look at the competition currently taking place between AQ and IS for the position of top terrorist group to know that inter-group competition between terrorist groups is as fierce as ever.  In a seemingly short period of time, IS has established itself as one of the most influential terrorist groups in the world.  In actuality, IS is comprised of a number of different terrorist groups, many of whom have existed for a number of years. What is different now is that these groups have coalesced around a single leader, Abu Bakr al-Baghdadi, and a single goal, the establishment of an Islamic State comprised of actual geographic territory.  This unification would likely not have been possible were it not for the amount of instability in and around Iraq and Syria, as well as level of dissatisfaction with the progress being made by AQ.

We have recently witnessed a series of attempts by IS to establish dominance over other Islamist terrorist groups, including AQ.  Most notably, they have taken over large amounts of geographic territory that was previously considered relatively well defended.  They have captured military sites and equipment that, even though some of it is of questionable utility (e.g., an inoperable scud missile), showcases their effectiveness to a legion of potential recruits.  They have amassed a small fortune (possibly as much as $2 billion) through donations and illicit activities, including smuggling. And, they have declared a caliphate and are demanding the loyalty and allegiance of every Muslim on Earth. With such bold actions and lofty ambitions, when coupled with the large amount of current regional instability, the likelihood that IS or a competitor will pursue, and possibly one day use, WMDs is very rapidly growing.

* Cory Davenport, Ph.D. is a Senior Researcher at the National Consortium for the Study of Terrorism and Responses to Terrorism (START), a Department of Homeland Security Center of Excellence based at the University of Maryland.  All opinions expressed are his alone and do not necessarily reflect the views of START, DHS, or UMD.