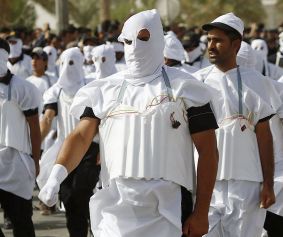 Jihad is Jihad is Jihad and It’s Deadly – Rachel Ehrenfeld – The ISIS announcement of  American aid worker, despite his conversion to Islam. Former Army Ranger Peter Edward Kassig, now Abdul-Rahman, will die because he is an American.  For the ISIS and all other jihadists America is the Great Satan and all Americans, apparently Muslim converts included, will be treated similarly. Beheading, stoning, hanging or shooting to death  Kufurs (unbelievers), is common among our so-called ‘allies’ the Saudis, as well as our soon to become new allies, Iran. While thew Mullahs are heading the strategic planing for the Islamist expansion, the Saudis and the Emirs in the Gulf States are funding it.  Qatar’s invovment  is significant, but it is hardly the only state providing material, financial, and ideological support for the growing jihadist movement. Turkey’s newly elected president, Muslim Brother Recep Tayyip Erdogan has extended his country’s support to the Islamic Republic of Iran, to Hamas and ISIS, all at the same time….The U.S. and the West were given many opportunities to understand the jihadist threat. They chose not to. And although it is not too late to wake up and confront the jihadist movement, the U.S. and the West are doomed if they refrain from identifying the ideology that feeds all jihadist groups and the states and rulers who fund them..…more…

Egypt’s, Iran’s and Turkey’s Transformation – Norman A. Bailey – The five most important countries of the Middle East and North Africa (MENA) from the standpoint of military power and economic clout are the Arab states Egypt and Saudi Arabia and the non-Arab states Israel, Turkey and Iran. Three of those countries are undergoing significant transformations: Egypt, Iran and Turkey. In the case of Turkey, the bad news proliferates. The chaos on its southern frontier is getting worse and the security threats to Turkey are increasing rapidly. The fact that the Islamic State (IS) is attacking the Syrian Kurds is a nightmare for Ankara, which is faced with deciding whether to get involved in the attack on IS or stand back and watch what happens. As of now, the wait and watch strategy has been adopted, but it is not likely it can continue, as Kurdish refugees flood north across the border and Kurdish fighters move south to aid their cousins in Syria. Equally significant, and actually more so in the medium-term is the deterioration of the Turkish economy. Its trade situation is worsening badly and the deficit is being covered by ever-increasing borrowing from banks and from friendly Gulf emirates. The resulting government debt levels are reaching dangerous levels, especially as the economy stagnates and exports decline. The lira has fallen by half against the U.S. dollar and the Turkish central bank has let interest rates rise to support the currency, which leads to an increase in the foreign exchange risk to Turkey’s creditors. An eventual default is not unlikely, coupled with social unrest due to worsening unemployment and inflation. In contrast the Islamic Republic of Iran is riding high.…more…