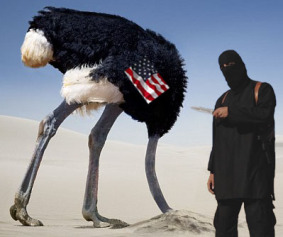 The ISIS announcement of  American aid worker, despite his conversion to Islam. Former Army Ranger Peter Edward Kassig, now Abdul-Rahman, will die because he is an American.  For the ISIS and all other jihadists America is the Great Satan and all Americans, apparently Muslim converts included, will be treated similarly.

Beheading, stoning, hanging or shooting to death  Kufurs (unbelievers), is common among our so-called ‘allies’ the Saudis, as well as our soon to become new allies, Iran. While thew Mullahs are heading the strategic planing for the Islamist expansion, the Saudis and the Emirs in the Gulf States are funding it.  Qatar’s invovment  is significant, but it is hardly the only state providing material, financial, and ideological support for the growing jihadist movement. Turkey’s newly elected president, Muslim Brother Recep Tayyip Erdogan has extended his country’s support to the Islamic Republic of Iran, to Hamas and ISIS, all at the same time.

For many decades oil-rich Saudi Arabia and other Gulf States have
uninterruptedly expanded the base of the jihadist movement that early on also received support from the former Soviet Union and called themselves national liberation fronts only to “come out” later as the soldiers of global jihad.

The Saudis have for decades funded jihad directly through their embassies and delegations, through thousands of mosques,
madrassas and Islamic centers everywhere loaded with Saudi-printed versions of the Quran and jihadist literature.These were distributed everywhere from Bosnia to Afghanistan to South and Southeast Asia, in Europe, and also in U.S., in Islamic and non-Islamic institutions (such as prisons).

Judging by the rising support for the jihadists in the West, their investments are likely to produce dividends towards establishing their goal of imposing Islamist rule and jihadist oppression in the West. While they are awash with money, they are running out of time not because they have been confronted by the Europeans or the U.S., but because of the growing number of jihadis who are now turning against those rulers in order to take over their role and their treasuries and their land.

The jihadists were not stopped even after al Qaeda’s attacks in September 2001. Instead, in response to the extremely wealthy Saudi and Gulf State denial of funding jihad and claims that they had been victimized by Western allegations of their sponsorship of al Qaeda, the U.S. and the West accepted blatantly arrogant lies. Moreover, they caved in to the Islamists’ demand to suppress evidence of their ever-growing role in sponsoring the expansion of jihadist ideology and to discredit and discourage information about this, claiming it constituted “Islamophobia.” The Muslim Brotherhood, the well of Islamic supremacist ideology from which all jihadis-Sunnis and Shiites-have drunk, deceitfully used Western liberal terms to disguise their agenda and to fool the West into believing that Islam is a fundamentally tolerant and democratic religion and that it represents justice, equality and above all “peace”.

The U.S. and the West were given many opportunities to understand the jihadist threat. They chose not to.

And although it is not too late to wake up and confront the jihadist movement, the U.S. and the West are doomed if they refrain from identifying the ideology that feeds all jihadist groups and the states and rulers who fund them.