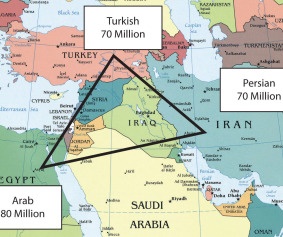 The five most important countries of the Middle East and North Africa (MENA) from the standpoint of military power and economic clout are the Arab states Egypt and Saudi Arabia and the non-Arab states Israel, Turkey and Iran. Three of those countries are undergoing significant transformations: Egypt, Iran and Turkey.

In the case of Turkey, the bad news proliferates. The chaos on its southern frontier is getting worse and the security threats to Turkey are increasing rapidly. The fact that the Islamic State (IS) is attacking the Syrian Kurds is a nightmare for Ankara, which is faced with deciding whether to get involved in the attack on IS or stand back and watch what happens. As of now, the wait and watch strategy has been adopted, but it is not likely it can continue, as Kurdish refugees flood north across the border and Kurdish fighters move south to aid their cousins in Syria.

Equally significant, and actually more so in the medium-term is the deterioration of the Turkish economy. Its trade situation is worsening badly and the deficit is being covered by ever-increasing borrowing from banks and from friendly Gulf emirates. The resulting government debt levels are reaching dangerous levels, especially as the economy stagnates and exports decline. The lira has fallen by half against the U.S. dollar and the Turkish central bank has let interest rates rise to support the currency, which leads to an increase in the foreign exchange risk to Turkey’s creditors. An eventual default is not unlikely, coupled with social unrest due to worsening unemployment and inflation.

In contrast the Islamic Republic of Iran is riding high. Another meaningless meeting of the six powers and Iran resulted in nothing but an agreement to meet again. The sanctions regime is collapsing and the development of its nuclear weapons capacity is moving ahead without let or hindrance, despite warnings by the IAEA. When the process ends in November (or is extended yet again), recreating meaningful sanctions will be impossible. Unlike Turkey, Iran’s Kurds so far have remained quiescent and its borders with Iraq and Iraqi Kurdistan secure. Iran can afford to intervene indirectly in the Iraqi conflict by support from the Quds Force and its commander, General Suleimani, for the Shiite militias that are fighting against IS. As demonstrated by the IS takeover of an Iraqi military base close to Baghdad, with Iraqi army casualties of 80%, the formal Iraqi army has not yet regained any degree of will and effectiveness, if it ever will.

The situation in Egypt is unique, due to its remarkable leader, President Abdel Fattah al-Sisi, who continues to amaze with his actions and pronouncements. In the face of near-unanimous opinion that the move was impossible, he eliminated the extremely costly energy subsidies, saving the Egyptian state billions in desperately needed funds. He has frontally attacked the Muslim Brotherhood and other extremist organizations and so far without significant opposition.

Perhaps most important, he has proclaimed that Islam must reform, join the 21st century and abandon violent jihad or face irrelevancy while creating a situation of permanent chaos in the MENA region and beyond, especially Africa and South Asia. He has declared that although fighting against IS is important, it is more important to fight against all the Islamic extremists wherever they operate, using all the instruments of statecraft, not just military. Thus, education, information, economic measures, subversion and sabotage must also be employed along with clearly identifying the enemy without the use of euphemisms.

Finally, he has cooperated fully with Israel in the intelligence and security fields and proposed a bold initiative to resolve the Palestinian refugee problem once and for all, dedicating an area of the Sinai five times the size of the Gaza Strip as a home for the Palestinian people, sovereign but demilitarized and with terrorist groups such as Hamas and Islamic Jihad banned from public life. His initiative unmasked the true motivations and the hypocrisy of the PLO and Fatah, when Abbas turned it down. Look for more surprises from this remarkable man.

** Norman A. Bailey, Ph.D., A member of ACD Board of Advisors, is Adjunct Professor of Economic Statecraft at The Institute of World Politics, Washington, DC, and teaches at the Center for National Security Studies and Geostrategy, University of Haifa.

* This column will be published on Globes.