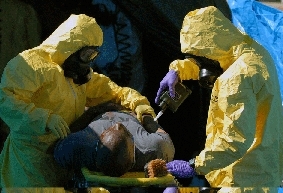 Chemical Terrorism – Rachel Ehrenfeld – Last August when President Obama announced the successful elimination of Syria’s chemical weapons arsenal, he went on the call on the Assad regime to “follow through on its promise to destroy remaining chemical weapons facilities.” At the same time, he stressed his concern “about omissions and discrepancies in Syria’s declaration to the organization that oversaw the destruction.” Earlier this month, however,…more…

Rewarding Hamas and the Palestinians – Rachel Ehrenfeld – Palestinian terrorists proved, yet again, that killing Jews is a good business. Each time their attempt to destroy the Jewish State of Israel is defeated, they get billions of dollars to rebuild and re-arm. Each time they use their own people as human shields, they receive favorable media, which at the same time condemns Israel. Each time the media condemns Israel for atrocities caused by the Palestinians, the “outraged” so-called ”world donor community” throws ever-growing funds at the Palestinians. Last Sunday, as an apparent “bonus” toward accomplishing the Palestinians’ goal to “wipe Israel off the map,” representatives from 50 countries and 20 regional and international organizations pledged $1.4 billion more than the $4 billion the Palestinians asked for. For twenty years the Palestinian Authority (and beforehand, the PLO) constantly misappropriated tens of billions of dollars in donations from everywhere. Instead of developing the economy, their leaders used the money to enrich themselves, their relatives and friends, increase their terrorist base, purchase arms, pay for attacks on Israel, fund future martyrs and their families, and mount international anti-Israeli lobby campaigns.…more…

Political Pilgrims (Cont.) – Sol W. Sanders – It’s time for someone to write an update of Paul Hollander’s marvelously insightful and humorous (after a fashion) 1981 Political Pilgrims.  For those kiddies for whom all this, and the environment in which it was written, is ancient history, may I remind you of Hollander’s hypothesis he fulfilled so well. It was to expose those Western intellectuals who flitted allegiance from one Marxist paradise to another. That followed, of course, their final acceptance that their initial unassailable infatuation with the Soviet Union was a failed love affair however bitter-sweet. Even their political naiveté could no longer take the strain between their hopes for a collectivized paradise on earth and the stark realities of one, if not the worst, of the tyrannies the world had ever known. So they transferred …more…

Klinghoffer and the ‘Two Sides’ of Terrorism. Would the Metropolitan Opera offer a work called ‘The Death of Martin Luther King Jr.’ with racist views in support of the assassination? – Floyd Abrams

The Silent Partnership: How the president has exploited the international campaign against IS in order to accommodate Iran. – Michael Doran

Obama Survival Manual, Intl. Edition: If you think 2014 has been a year of unraveling and disorder, just wait. – Bret Stephens

Islamic Jihad praises Iran for role in Gaza war. Supreme leader Ayatollah. Ali Khamenei promises to ‘reinforce their resources’ before another round of fighting – AFP