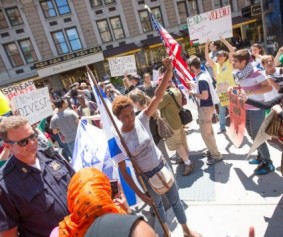 It’s time for someone to write an update of Paul Hollander’s marvelously insightful and humorous (after a fashion) 1981 Political Pilgrims.  For those kiddies for whom all this, and the environment in which it was written, is ancient history, may I remind you of Hollander’s hypothesis he fulfilled so well. It was to expose those Western intellectuals who flitted allegiance from one Marxist paradise to another.

That followed, of course, their final acceptance that their initial unassailable infatuation with the Soviet Union was a failed love affair however bitter-sweet. Even their political naiveté could no longer take the strain between their hopes for a collectivized paradise on earth and the stark realities of one, if not the worst, of the tyrannies the world had ever known. So they transferred their political affections to Communist China, then Castro’s Cuba, then to Sandinista Nicaragua, and so on, sometimes falling off the train even into North Korea, Albania, Romania, or Mozambique, along the way.

True, there was a basis in the excoriation of the ancien regimes: Tsarist Russia was an abomination, Nicaragua’s Somoza was the epitome of petty tyrants (even if FDR did say “he’s a SOB, but he’s our SOB” after weaning him from pro-Nazi sympathies), Batista’s Cuba was infinitely corrupt, etc., etc.

But the Political Pilgrims were willing to excuse almost anything in the hope that the new revolutionary regimes would deliver on the promised “from each according to his abilities to each according to his needs” in their hoped-for utopias. Along the way, however, they picked up rationalizations for the absence of the rule of law and new, bitter human rights transgressions. And, so, on to the next candidate with the help, often, of a compliant media. (There was The New York Times’ Herbert Mathews’s famous infatuation with Fidel Castro, the Christian Science Monitor’s Moscow correspondent as a Soviet agent, etc.!)

One would have thought with the dramatic and swift implosion of the Soviet Union and its empire, and for all but the most delusional, Communism as a solution to life’s problems, the whole pilgrimage might have ended. But as Hollander speculated in the final pages of his book, the Western intellectuals’ problem is not in the stars but in themselves.

Although enormously influential in deciding the fate of their societies, they nevertheless have an unrequited hunger for more direct power, often denied them by the structures of the Western democracies and the good sense of their electorates. They are left often to squabble, as Henry Kissinger has acknowledged as “one who knows one,” as fiercely as any other contest in the modern world for the scraps and bones of academia. (Looking over the shoulder of my academic contemporaries, I am not so sure they are indeed “scraps”).

All this comes to mind as I watch, fascinated, as all the diverse antidemocratic elements of the Western intellectual environment coalesce behind the reputed cause of the Palestinians. “Palestine” has become the new fashionable mantra which unites single-minded political fanatics, the usual student adolescent ebullience, tired old ex-Stalinists who have no other place to go, and the assortment of dizzy Hollywood bimbos (male and female) who must make a political statement whatever their apolitical heritage, training or talents. More sinister, ”Palestine” now becomes a “front” for the jihadists in their murderous rampage against the West and its humanism.

Of course, without getting into the terribly complex history of Zionism, Jews and the state of Israel, except to point out that initiatives for compromise by the Israelis have generally been met with Arab rejection, there is a real Palestinian Arab cause. More than anything else, it is hidden by the guilt of dozens of Arab and Muslim states—many of them with enormous inflows of petrodollars they cannot efficiently absorb—who have refused to take in their Palestinian Arab brothers, or having done so, assign them to second-class citizenship.

One simple equation is that, while “the Zionist entity” has taken in more than 800,000 refugees from Arab and Muslim countries—most of them robbed of everything they owned but lucky to escape with their skins, the Arab-Muslim world has used the Palestinian Arabs as a political foil for 60 years to rally opposition to the Jewish state, a scapegoat to fend off agitation against their own corrupt and oppressive regimes.

One must distinguish between the real and continuing problem of the Palestinian Arabs as a people suffering as much as anything from the opportunism and adventurism of their self-appointed elite. (The West Bank Palestinian leaders have virtually abandoned even their earlier corrupt elections.) That elite has lived off vast sums from international donors for Palestinian relief. Secretary of State John Kerry just announced $212 million as an initial down-payment for rebuilding Gaza after the destruction the Hamas leadership brought on it with their attempt to terrorize the Israelis into military defeat with a massive missiles attack on civilian populations. That makes more than $400 million Washington has thrown into the hopper this year, with the well publicized theft of much of such American and European donations by corrupt politicians who prance around the UN seeking support from the new Political Pilgrims.

For rather suddenly as political movements go, “Palestiine” has become the new home for our Political Pilgrims. Coincidentally, in Western Europe, it has become the camouflage for the traditional and yet to be explained historic anti-Semitism. Except for France with its 400,000 Jews, it becomes all the more inexplicable since in such countries as Poland—whose population pre-World War II was a quarter Jewish—it is a reawakened anti-Semitism without Jews courtesy of Adolph Hitler.

But “Palestine” has become much more than all that. It is the excuse used by bright, young twisted intellectual university students to deny the platform and a hearing to spokesmen to what they consider an unacceptable cause or line of reasoning. Alas! Political Pilgrims today have turned their back on the very raison d’etre of the university as a forum for all ideas and their advocates. That “intellectual trend” and the state of mind it epitomizes threatens the very soul of Western culture.

* A version of this column was posted Monday, October 13, 2014, on the website yeoldecrabb.com.