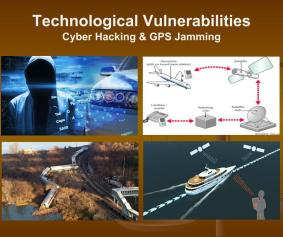 Transportation Terrorism – Part I – Rachel Ehrenfeld – The art of war teaches us to rely not on the likelihood that the enemy’s not coming, but on our own readiness to receive him; not on the chance of his not attacking, but rather on the fact that we have made our position unassailable. Public and commercial transportation has become a choice target and a weapon for terrorists the world-over.  This presentation offers an overview of the threats, as well as solutions to mitigate them.…more…

Stop Jihadist Incitement in America – Rachel Ehrenfeld – Samuel Huntington predicted the growing cultural and religious conflicts that we are witnessing daily. His dubiousness regarding the ability of the West to understand those challenges and reluctance to meet them has been disturbingly accurate. A case in point is the failures of the West have brought about unprecedented expansion of “political Islam” both as a threat and an actuality. All that the U.S. and the West have done to accommodate and buy-off its self-proclaimed Islamist enemies have only made them stronger.  Instead of fighting the Islamists and their ideology, the U.S. and other Western nations have chosen to accept Islamists demands to modify their long held values, and eroding the freedoms of their own citizens. This submission to Islamist intimidation leads to the prevalent ‘political correctness’ syndrome that further compromises our security. Non-stop jihadist propaganda, recruitment and incitement to violence appear on TV, Internet websites, social media such as Facebook, Twitter, YouTube, Google and the likes. .…more…

Turkey- Syria: Muslim Brother Misirli’s Reckoning – J. Millard Burr – With the outbreak of civil war in Syria the government of Bashar al-Assad claimed that Syrian members of the international Muslim Brotherhood (Ikhwan al-Muslimun) had taken up arms against the government. Having observed the meeting of Syrian Ikhwan in Turkey the Syrian Foreign Minister Kabalan argued that, “The Muslim Brotherhood, those who have taken part in armed operations against the Syrian army in 1980s, have Syrian blood on their hands.” Kabalan added, “For us, the Muslim Brotherhood is like the PKK [Kurdistan Workers’ Party] is for Turkey.” The minister then pointed out that Gazi Misirli, a Syrian-born Turkish citizen and Ikhwan leader was serving as a senior aide to Turkish Prime Minister Tayyip Erdogan. Misirli, who has shed his Syrian name (Gazwan Masri) was born in Aleppo, Syria in 1964…..Erdogan introduced Misirli and according to Kabalan’s account Erdogan said (for undisclosed reasons), “Please, my brother Bashar, help this man.”… There is no doubt that Misirli is a major figure in the international Muslim Brotherhood.…more…

Gulf Countries Concerned Over Possible Fallout from Dimona – Ami Dor-On – Israel’s nuclear capabilities occupy the minds of many, not only Israel’s direct enemies but also the countries in the Persian Gulf, which are heavily invested in comprehensive studies designed to obtain any information on this issue. Their purpose is, inter alia, to be better prepared for any eventuality. One of the more surprising agencies which publish detailed position papers on Israeli nuclear ability and its perils, is The Emirates Center for Strategic Studies and Research. Recently, the center released interesting details on a possible source of hazard: the plant at Dimona, Israel. Among the interesting arguments in the framework of a recent study by the center, takes up a warning issued by Bennett Ramberg, a policy analyst in the US State Department’s Bureau of Politico-Military Affairs under President George H.W. Bush (senior). Ramberg said: in the case of an Israeli strike against Iran, not necessarily an Israeli nuclear strike, the possible counter-attack on Israel (by Iran and or Hezbollah) using conventional missiles may focus on the Dimona plutonium-based nuclear plant.…more…

But Will the Senate “Deliberate”? – Sol W. Sanders – Americans like to believe as a culture they excel at detail. It’s not true. The Japanese, the Germans, and sometimes the French, may well do so. But the American forte is to reduce the complexity of big ideas – whether in politics or industry – and broaden their appeal or their functionality. The Brits invented TV, radar, discovered antibiotics – but Americans made them marketable and a commonplace. Indeed, so-called popular culture, now a worldwide phenomenon, is a product of the American lifestyle which strives for universality. The ability to achieve a common denominator, sometimes at the risk of higher quality but wider acceptance, has characterized U.S. decision-making through its history and been the genius of the society. Therefore, the devil remains in the details. And when they are lost sight of, among other things, there is the avalanche of continuing disasters which have befallen the Obama Administration…. But the self-evident nature of the Fast and Furious guns smuggling scandal, the Benghazi fiasco and martyrdoms, the IRS persecutions and their discrediting of government institutions, the NSA’s perceived overreach and threat of Big Brother, Eric Holder’s star-chamber pursuit of newsmen, the Secret Service’s corruption and mishaps, the Ebola muckup and threat of epidemic – all are in large part the failure to tend to detail.…more…

North Koreans working as ‘state-sponsored slaves’ in Qatar. Defectors claim Pyongyang regime pockets 90% or more of earnings made by migrants working on construction sites in Qatar, where preparations are under way for 2022 World Cup – Guardian UK

Afghanistan: ‘A Shocking Indictment.’ Review of ‘No Good Men Among the Living: America, the Taliban, and the War Through Afghan Eyes’ by Anand Gopal – Rory Stewart

A New Authorization for Use of Military Force Against the Islamic State: Comparison of Current Proposals in Brief – Matthew C. Weed, Analyst in Foreign Policy Legislation