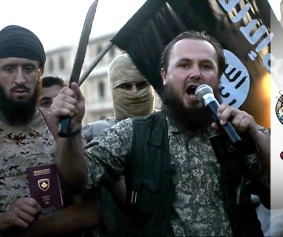 Samuel Huntington predicted the growing cultural and religious conflicts that we are witnessing daily. His dubiousness regarding the ability of the West to understand those challenges and reluctance to meet them has been disturbingly accurate.

A case in point is the failures of the West have brought about unprecedented expansion of “political Islam” both as a threat and an actuality.

All that the U.S. and the West have done to accommodate and buy-off its self-proclaimed Islamist enemies have only made them stronger.  Instead of fighting the Islamists and their ideology, the U.S. and other Western nations have chosen to accept Islamists demands to modify their long held values, and eroding the freedoms of their own citizens. This submission to Islamist intimidation leads to the prevalent ‘political correctness’ syndrome that further compromises our security.

Non-stop jihadist propaganda, recruitment and incitement to violence appear on TV, Internet websites, social media such as Facebook, Twitter, YouTube, Google and the likes. Jihadist’s messages can be listened to on the radio and read online, in print-media and in books. Their virulent attacks on Americans, Jews, Israel and all other infidels and praise of Hamas, ISIS and al Qaeda can be heard in Islamic Centers, Islamic schools, mosques, rallies and many other public forums.

Early on the Islamists understood, better than most Americas, the value of our right of free speech and abused it by intimidating our political and cultural elites. At first, they tested our media outlets with allegation they had been slandered. They perfected lawfare by often filling expensive lawsuits, mostly in the London, which soon become known as “The libel Capital of the world.”  It did not take the Islamists long to confirm that Westerners, especially Americans, cherished their wealth more than their unique right of free expression, and were perfectly ready to impose “political correctness” on society, thus contributing to the obfuscation of the Islamist threat.

As a result, our enemies increased the volume, explicitness and vehemence of their hate messages that reach Americans at home, on their cell phones, at the workplace, at school, in the army, and even in prisons. The growing barbarity of their videotapes and motivational messages now alarms many Americans. But others are inspired to join the jihadist movement. Some are Muslims living in the U.S.; others are new converts. How many are there is unknown, but, as we have been witnessing, there are growing numbers of those ready to follow the jihadists’ detailed instructions to commit terrorist attacks as martyrs “in the name of Allah.”  While we keep defending such messages as “free speech,” Americans have been losing their freedom to speak freely and recently with growing frequency are coming under violent terrorist attacks that are carried out according to the jihadist messages.

The jihadists’ venomous and graphic messages demanding the killing of Americans have proved again and again that they meet the legal definition of terrorism. It is time to stop pretending that those who follow such instructions to kill Americans, Israelis, Jews and other “infidels” in Belgium, Canada, England, Denmark, France and elsewhere, are “self-radicalized” ‘lone wolfs’?

With ‘political correctness’ is running amok, we fail to acknowledge that free speech does not extend to jihadist messages that directly incite, or are likely to incite imminent lawless action (Brandenburg v. Ohio, 395 U.S. 444 (1969).

How many more Americans will be terrorized and brutally murdered following jihadist incitement before the government takes the necessary actions to stop such incitement?

Western nations with lesser protection for free speech than the U.S., should re-examine their hate crime laws to better protect their residents from jihadist incitement before it garners new recruits for violence and murder at home and abroad, that cause us to abandon our values and surrender our freedoms.

* Dr. Rachel Ehrenfeld is director of N.Y based American Center for Democracy (www.acdemocracy.org)