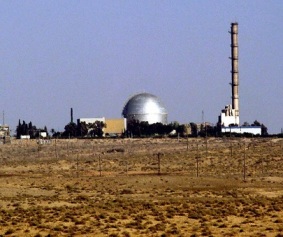 Israel’s nuclear capabilities occupy the minds of many, not only Israel’s direct enemies but also the countries in the Persian Gulf, which are heavily invested in comprehensive studies designed to obtain any information on this issue. Their purpose is, inter alia, to be better prepared for any eventuality. One of the more surprising agencies which publish detailed position papers on Israeli nuclear ability and its perils, is The Emirates Center for Strategic Studies and Research. Recently, the center released interesting details on a possible source of hazard: the plant at Dimona, Israel.

Among the interesting arguments in the framework of a recent study by the center, takes up a warning issued by Bennett Ramberg, a policy analyst in the US State Department’s Bureau of Politico-Military Affairs under President George H.W. Bush (senior). Ramberg said as follows: in the case of an Israeli strike against Iran, not necessarily an Israeli nuclear strike, the possible counter-attack on Israel (by Iran and or Hezbollah) using conventional missiles may focus on the Dimona plutonium-based nuclear plant.

Ramberg underscored that according to estimates by American nuclear experts, the results of such a conventional attack on Israel could resemble those of a so-called ’dirty bomb’. An attack on the plant at Dimona could engulf neighboring Israeli towns, but due to the wind patterns in the area, the nuclear fallout might cross the Arab Desert all the way to the Persian Gulf, thereby affecting mass populations.

The study’s co-authors believe Israel gained a great deal from its policy of nuclear ambiguity. For instance, when three countries – Iran, Iraq and Syria – were perceived in the public’s eye for years as attempting to develop nuclear capabilities, the result was that the global community turned against those three countries. Nevertheless, Israel was not the target of any sanctions, nor was any direct pressure brought to bear on Israeli to stop its alleged nuclear activity. Thus, behind this veil of ambiguity, claims the report, Israel has managed to produce an arsenal of 75-200 nuclear bombs. In addition, the world has never made a real effort to force Israel to sign the NPT, the Non-Proliferation Treaty, let alone ratify it.

* This article was originally posted on i-his.com on November 4, 2014.