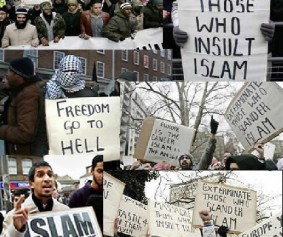 It’s Jihad, Stupid – Rachel Ehrenfeld – Statements made by U.S. President Barack Hussein Obama and Defense Secretary Chuck Hagel revealed that both seem to suffer not only from severe shortsightedness, but also from an acute case of willful blindness. Similar afflictions beset the U.S. political and military leadership and the media. The rest of Western world seems to suffer from the same problems. All act surprised by the rapid advance of the ISIS, as well as its brutality.  While the President described the beheading of photojournalist James Foley as “an act of violence that shocks the conscience,” Hagel announced: “Oh, this is beyond anything that we’ve seen.” Really?…more…

Al Qaeda’s Balkan Ties: The Bosnian Connections – An ACD Exclusive – Gordon N. Bardos – Should anyone have had any doubts, the barbaric murder of US photojournalist James Foley fully exposes the true nature of the Islamist terrorists menacing the Middle East. Unfortunately, the savagery exhibited in what happened to James Foley was not unique—beheading and suicide bombings have become standard tactics in the Islamist terrorists’ way of war. Just weeks before Foley’s murder Kosovo jihadi Lavdrim Muhaxheri posted similar photos of himself “in action” in Iraq. Such Islamist-terrorist ritual beheadings were seen during the Bosnian jihad as well, when extremists would produce “promotional videos” of their efforts showing the decapitation of Serb prisoners, or, in another case, when Bosnian jihad veteran Omar Saeed Sheik was involved in the murder/ beheading of Wall Street Journal reporter Daniel Pearle.  The expansion of militant Islamism from places such as Afghanistan, Egypt, Iran and Saudi Arabia to parts of the world such as the Balkans is no accident; it is part of a complex phenomenon involving several distinct elements, not the least of which is an organized, well-funded effort by hardline Islamist states to export their extremist ideologies to other parts of the world. With respect to the Balkans, for instance, by one estimate the Saudis alone spent $1 billion (US) on “Islamic activities” in Bosnia between 1992-98.…more…

Turkey’s Ongoing Support of Hamas – Rachel Ehrenfeld – IHH (full Turkish name “Insan Hak ve Hurriyetleri ve Insani Yardım Vakfı,” in English “The Foundation for Human Rights and Freedoms and Humanitarian Relief”) is on the march again. The government-sponsored Turkish radical Islamic jihadist organization’s ideology is anti-American, anti-Western, anti-Israeli and anti-Semitic. It operates not only in Turkey  and throughout the Middle East, but also in 100 countries worldwide. It is closely affiliated with  Hamas and other Muslim Brotherhood groups and has the Turkish President, devout Muslim Brother and a great supporter of Hamas, Recep Tayyip Erdogan, as its main cheerleader. Yet, instead of designating Erdogan as supporter of a terrorist group, the Obama administration has decided to supply him with new weapons, which may end up in the hands of Hamas. The IHH  served as the front organization behind the May 2010 international effort to break Israel’s naval blockade on Hamas-ruled Gaza with a flotilla led by the Turkish registered ship MV “Mavi Marmara.”  When the ship wouldn’t stop, 13 Israeli commandos who boarded the ship were attacked by 40 IHH activists “armed with iron bars and knives.” The bloody confrontation left 10 activists dead, as well as 10 Israelis wounded.…more…

Terrorism Tunnels – Rachel Ehrenfeld – The main purpose of the expensive tunnel network Hamas dug from Gaza was to terrorize Israel. The tunnels they constructed under the Egyptian border have been used for mostly criminal  enterprises, such as arms, people, goods and sometimes drug smuggling, much like the tunnels running under the Mexico-U.S. border, of which 170 have been discovered since 1990. How many more tunnels are there? How many people smuggled their way into the U.S. through those tunnels? How many of them came in search of a better life? How many criminals came trough to build or join deadly criminal gangs operating throughout the country? And how many al-Qaeda, Hamas, Hezbollah and other jihadists came through to agitate, recruit, raise funds and wait for an opportunity, or order, to terrorize America?…more…

Names of Palestinians Killed in Gaza – Part 3 – Meir Amit Intelligence and Terrorism Information Center – This document is the third in a series of publications of the Intelligence and Terrorism Information Center (ITIC), as part of a project examining the names of the Palestinians killed in Operation Protective Edge. The project’s goal is to ascertain the identity of terrorist operatives and non-involved citizens, and to examine the ratio between them. The number of names of those killed, examined by the Information Center to date, is 450. The examinations carried out by the Information Center are based on the lists issued by the Hamas-controlled Palestinian Health Ministry, despite the reliability problems and deficiencies found in them. To these basic lists we have added terrorist operatives who do not appear on them, both for technical reasons and as a result of Hamas’s policy of concealment and deception. 2.   Weighting the findings of the current examination and the findings of the two previous examinations (detailed in the two previous documents) yields the following results: A.  208 of those killed were terrorist operatives(66 + 71 + 71). B.  240 of those killed were non-involved civilians (93 + 66 + 81). C.  The identity of 44 people who were killed is unknown at this stage (26 + 15 + 3). Therefore, it is not possible to determine whether they were terrorist operatives or non-involved civilians. D. Of the 448 dead who could be identified based on the three lists that were examined, terrorist operatives constitute approximately 46% of the names. Non-involved civilians constitute approximately 54% of the names. This ratio may vary as the ITIC continues to examine the names of those killed.…more…

A Nation of Victims? – Sol W. Sanders – In a strange world of blatant hypocrisy and distorted equivalences, the United States–with the help of an all too cooperative media–is turning to victimization as the definition and explanation of most human relationships. The tragedy of the death of an 18-year-old during an altercation with the police is not to be vouchsafed. Nor can the long and brutal history of U.S, race relations–particularly with African-Americans as victims–be denied or forgotten. But the instantaneous assumption that the police were at fault (still to be attenuated) and in the innocence of the victim (tarnished by surveillance video of a strong-arm robber) is symptomatic of a larger social evil. It is the instantaneous and unsubtle attribution of victimhood to individuals caught up in life dramas whatever their real character. Not many of us sail through life without suffering what we deem injustice. Those may, objectively, be larger or smaller afflictions. But for the individual concerned, they are monumental and cannot be wished away. But to celebrate those kinds of miscarriages of life–especially before they are analyzed–is to create a false atmosphere of over A Nation of Victims?…more…

ISIS and the West: Neutrality absolves nothing – Hugo Schmidt

Wake up, America — the war has hit home – Benny Avni

Best Friends Don’t Have to Ask. When Israel cracks into its U.S.-funded weapons stockpile, even President Obama doesn’t hear about it. – David Schenker

Syria’s Disarmament Mirage. Even the White House concedes that Assad may not have turned over all of his chemical weapons. – Wall Street Journal

When the U.S. Abdicates, Disaster Usually Follows. John McCain was mocked in 2008 when he said U.S. troops might stay for years in Iraq. He looks better now. – Philip Terzian

The logic of not paying ransoms – Adam Taylor

“The End of History?” at 25. Liberalism’s Beleaguered Victory.  Could it be that liberalism spawns counter-ideologies because of its very own nature? – Abram Shulsky