A Nation of Victims? 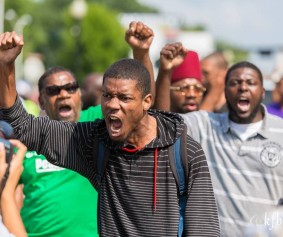 In a strange world of blatant hypocrisy and distorted equivalences, the United States–with the help of an all too cooperative media–is turning to victimization as the definition and explanation of most human relationships.

The tragedy of the death of an 18-year-old during an altercation with the police is not to be vouchsafed. Nor can the long and brutal history of U.S, race relations–particularly with African-Americans as victims–be denied or forgotten.

But the instantaneous assumption that the police were at fault (still to be attenuated) and in the innocence of the victim (tarnished by surveillance video of a strong-arm robber) is symptomatic of a larger social evil. It is the instantaneous and unsubtle attribution of victimhood to individuals caught up in life dramas whatever their real character.

Not many of us sail through life without suffering what we deem injustice. Those may, objectively, be larger or smaller afflictions. But for the individual concerned, they are monumental and cannot be wished away. But to celebrate those kinds of miscarriages of life–especially before they are analyzed–is to create a false atmosphere of overwhelming injustice and persecution which imperils society.

The phenomenon is so widespread that sometimes it not only trivializes real misbehavior, but becomes a joke. A New York mother complains about an aggrieved innocent holding a young thief in a bearhug, capturing him for the police after he and a companion had stolen her telephone. The mother excuses her own obvious parental neglect by yammering about her son having fallen among thieving companions. But she insists, and that is where it turns ridiculous, but an all too common phenomenon, that he is a victim rather than a child who obviously is launched on a criminal career, a menace to society.

All this is compounded, of course, by the 24-hour media news cycle with its appetite for new revelations whether vetted or not and commentary by anchors who rarely know the background of these complicated issues much less having a professionalism about their trade. One of the strangest phenomenon of our times is that these “newsmen” reporting on current history have little knowledge or apparent interest in past history itself.

This writer is old enough and was intimately aware of the era of Jim Crow “legal” segregation and oppression of African-Americans. But, however much we have failed to heal the wounds of that long history, that era is ended. That is not to say that there may not continue to be discrimination, even sometimes within the apparatus of local government as is claimed in the current St. Louis suburban episode.

But the very fact that that there is, if anything, disproportional representation–for those who mistakenly hold to numbers and quotas as solutions to such problems–in the federal government means we are in a different era. That Virginia, the largest slaveholding state before the Emancipation, in 1990 had the first African American governor of any state since Reconstruction is one of many evidences that there has been an enormous turn in official and popular social reconstruction.

There must have been some, perhaps many, who believed that inauguration of Barak Hussein Obama on January 20, 2009, as the first Africa-American president was the culmination of a process of curing U.S. racial conflict. One suspects that there were not a few among the American elite who voted for him rather than his highly qualified opponents with that hope in mind.

But if so, they have certainly by now been disabused of that aspiration.

It is patently obvious why: the problem identified as “race relations” goes beyond such “solutions”. The problem encompasses much more than attitudes between the majority population and the minorities. It involves social and economic issues that are as fundamental to life in general in the U.S., whether for blacks, whites or other minorities. The growing failure of public education, for example, so obvious but so difficult of analysis and solution, is perhaps as important as any other factor.

The onset of a period of economic downturn, for which Mr. Obama obviously bears no responsibility, has contributed to the aggravation of the disparities in income between a large part of the Black population and the majority. Life in the large city poverty ghettoes may be worse and certainly more violent than it had been earlier. The fracturing of the Black family has reached new crisis levels.

But the Obama Administration has made its contribution to the problem. While it has hardly surfaced publicly, there is likely to have been a general disappointment of many in the Black community with what they thought might be more solutions to their problems coming from a Black president. In fact, the Obama Administration’s anti-business prejudices and policies have if anything contributed further to the general malfunctioning of the economy and a worsening of their career prospects. And that comes on the top of a digital revolution which, however much it has moved the whole of civilization forward, is rapidly eliminating low-skill jobs which in the past had provided employment for those, including a large portion of the Black population, at the bottom of the economic ladder.

Nor has the President contributed to any amelioration of the several highly publicized if relatively minor instances of alleged racial bias and conflict. Too often he has taken an unwarranted shoot-from-the-hip position before all the facts were in. Even in his latest statement, much more moderated, on the episode in Missouri, his perennial logical fault of always seeking equivalences between contenders muddies the waters. His philosophical assumption in both domestic and foreign matters that the “truth” and any “solution” lies in some hypothetical midway is nonsensical. Nor if that kind of analysis is deemed only a camouflage for calming the waters, it often has the opposite effect.

Perhaps the most regrettable part of the current scene is the exploitation of supposed victimhood by some of the old and tired prominent African-American agitators posing as spokesmen. It is indicative of their misplaced attention that they have not put an equivalent emphasis on the terrible toll of crime inside the big city Black ghettos like Chicago’s with its enormous Black-on-Black murder rate. Instead they immediately are on the scene of any Black-White encounter to beat the drums for what they claim would be justice, again before facts are known, and in effect, only exacerbating the racial tension.

It is hard to guess where all this leads. It certainly does not aid–even by drawing attention to the episodes–toward finding remedies for the lack of education and employment for the poorest of Americans, whether they be black or white. Of course, economic welfare is not necessarily an index to crime and violence; it’s to be remembered that the levels of such during the Great Depression were enormously lower.

Nor does it rest in the traditions of America’s political past. To the contrary, the history of the U.S. has been to a considerable extent based on welcoming the victims of oppression in Europe and Asia–if not the original enslavement of Africans–but not dictating their role in this society. Rather, the strength of America’s past is that the “[T]he wretched refuse of your teeming shore” came precisely to escape victimhood, to ignore their “homeless, tempest-tost” past enjoying in a new freedom the ability to make their own way.

Celebrating real or imagined victimhood is not the American way and those who work at it are doing themselves, their friends and the nation a great disservice.

A version of this column will appear on yeoldecrabb.com on Monday, August 18, 2014