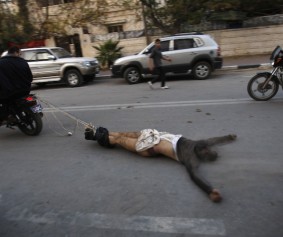 Statements made by U.S. President Barack Hussein Obama and Defense Secretary Chuck Hagel, after ISIS released videos showing their beheading of photojournalist James Foley, revealed that both seem to suffer not only from severe shortsightedness, but also from an acute case of willful blindness. Similar afflictions beset the U.S. political and military leadership and the media. The rest of Western world seems to suffer from the same problems.

All act surprised by the rapid advance of the ISIS, as well as its brutality.  While the President described the beheading as “an act of violence that shocks the conscience,” Hagel announced: “Oh, this is beyond anything that we’ve seen.” Really?

A cursory google search reveals similarly horrid images of jihadists beheading, stoning, stabbing, burning, lynching  and other unimaginable forms of taking human lives by celebrating members of al Qaeda,  al Shabab,  ISIS,  Hamas, and Hezbollah. ISIS’s release of the video of James Foley’s brutal murder was followed two days later with Hamas videos of summary executions in Gaza. Indeed, the credit for exploiting the Western media to publicize their jihadi savagery belongs to the PLO (see below). The common denominator of these and like-minded Islamist Sunni and Shia groups is jihad. Their brutality matches that of the Nazis.

Yet, no American, European or other Western leader dared to identify the jihadist problem by its name.

Mr. Obama declared, “There has to be a clear rejection of these kind of nihilistic ideologies.” But the ISIS’s and other jihadists’ ideology is not “nihilistic.”  Their ideology directs them to die while killing as many infidels as they can. The more they kill, the merrier will be their reward in heaven, they believe.

Commenting on the ISIS barbarous killing of Foley, House Intelligence Committee Chairman Mike Rogers, R-Mich, said, “America got a glimpse of exactly who they are…this is a group you need to deal with.” Why wasn’t “this group” dealt with already? Has our leadership waited until the ISIS had the opportunity to commit a heinous crime against an (American) individual that would outrage Americans, so our government would feel justified to take appropriate measures against the ISIS?  If that’s what they wanted, they got it.  Americans now understand that ISIS, which according to our government sources, is not in the U.S. yet, could be a problem. But how can this clueless Administration assure the public there are no ISIS supporters and sympathizers here? How successful would law enforcement agents on the look-out for ISIS operatives? ISIS and other jihadis have learned to operate under the radar, until a decision is made to strike.

Our Defense Secretary announced that the “ISIL is…beyond just a terrorist group. They marry ideology, a sophistication of strategic and tactical military prowess.”

But this is not unique to ISIS. Iran-trained Hezbollah and Hamas, for example, share the same main agenda with ISIS–to force sharia on the world.. Thus far the Muslim Brotherhood’s  Palestinian branch, Iranian-trained and supplied Hamas, has failed to carry out its plan to destroy the Jewish State of Israel and kill all the Jews only because Israel readied itself. In the meantime, Hamas, like ISIS, does its best to kill its own Muslims.

As if Mr. Hagel’s surprise at ISIS capabilities were not enough, he seemed to admit that the U.S. is unprepared to defend against groups such as ISIS. “We must prepare for everything… and “get ready,” he said. The ISIS and the other jihadi groups must have been thrilled to hear this.

The chairman of the Joint Chiefs of Staff, Gen. Martin Dempsey, had this to add: “ISIS will only truly be defeated when it’s rejected by the 20 million disenfranchised Sunni that happen to reside between Damascus and Baghdad.” What about the other hundreds of millions of Sunnis who share ISIS jihadi ideology?  And the thousands of foreign fighters who flock to Sunni training camps in Turkey, courtesy of the country’s newly re-elected president, Muslim Brother Recep Tayyip Erdoğan.

On August 20, 2014, Walid Shobat posted a video “showing the ISIS training centers in Turkey” for all supporters of al-Qaida to the Middle East.  Watch the video and hear the speaker calling to “Destroy and blow up our enemies, victory is near … young men, enroll, land and win .. young men its our religion attack with your weapons and win .. spread throughout the earth and raze the strongholds of the unbelievers.” Shobat.com reported that “as far back as March,” there were ISIS “training centers in Orfa, Ghazi Antab and Antakia (Antioch), [which were] set up by the Turkish government for more terrorists to be sent to Syria.”

Judging by the U.S. leadership’s surprise, one has to reach the conclusion that the U.S. Administration was either not privy to similar information, or that it decided to ignore it.

Incredibly, Obama said the conflict was not a “religious” one, but rather one of a shared “common security and a common set of values.”

“The ISIL speaks for no religion,” Obama said. “Their victims are overwhelmingly Muslim, and no faith teaches people to massacre innocents. No just god would stand for what they did yesterday and what they do every single day. ISIL has no ideology of any value to human beings…people like this ultimately fail. They fail because the future is won by those who build and not destroy.”

However, considering the pace at which ISIS is advancing, the growing numbers of fighters who are joining the group, the sophisticated (mostly American) weapons they have captured, their growing treasury, and the U.S. lack of will or ability to respond decisively–or even willingness to identify the jihadi ideology behind the ISIS as THE problem – the future will belong to those willing to identify jihad and its practitioners and fight it and them.