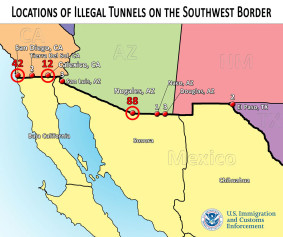 Left: More 170 tunnels found under the the U.S. Mexico boarder.

The main purpose of the expensive tunnel network Hamas dug from Gaza was to terrorize Israel. The tunnels they constructed under the Egyptian border have been used for mostly criminal  enterprises, such as arms, people, goods and sometimes drug smuggling, much like the tunnels running under the Mexico-U.S. border, of which 170 have been discovered since 1990.

How many more tunnels are there? How many people smuggled their way into the U.S. through those tunnels? How many of them came in search of a better life? How many criminals came trough to build or join deadly criminal gangs operating throughout the country? And how many al-Qaeda, Hamas, Hezbollah and other jihadists came through to agitate, recruit, raise funds and wait for an opportunity, or order, to terrorize America?

Considering Iran’s, Hezbollah’s and other jihadists’ growing presence in Central and South America, and their collaboration with criminal gangs, it would be foolhardy to dismiss their opportunities and readiness to use of the Mexican tunnels.

Though our Northern neighbor, Canada, bares very little resemblance to corrupt lawless and Mexico, jihadist activity is unabated. ISIS, Hamas, and Hezbollah supporters who have long standing orders of deportation against them, remain in the country free to pursue their agenda to recruit, incite, raise money and even travel to Iraq, Lebanon and Syria, to join the terrorist group of their choice: al Qaeda, ISIS, Hamas, Hizballah, or others. Some died. Some returned. How many of those simply walked over or drove  to the U.S.? But we have no idea how many of the foreign fighters who were trained and ordered to go to the U.S. come through the Mexican tunnels.

Israel Homeland Security has this to say about the tunnels threat:

The Underground Threat is not an Exclusively Israeli Problem*

A lot of attention has been paid in the past weeks to Israel’s struggle against the terror tunnels employed by Hamas in Gaza. Nevertheless, Israel isn’t the only country in the world whose security is threatened by the ancient warfare method.

Throughout the continents, tunnels undermine governments and law enforcement agencies. Some are used for smuggling of contraband, for human trafficking and illegal immigration. Others have more belligerent purposes and may be used by terror organizations. Tunnels may also vary in size and structure. Tunnels dug by Hamas for example are often found 20 meters underground and some are 2.4 km long. It is estimated that the terror organization invested millions in structuring the tunnels, covering each with hundreds of tons of concrete and equipping them with electricity and supplies.

U.S and Mexico are also concerned about tunnels on their border which enable human trafficking and smuggling of drugs and weapons, keeping busy the Drug Enforcement Administration, the Immigration and Customs Enforcement and Border Patrol. Around 170 tunnels have been discovered since 1990, varying in size and complexity – from 148 to 800 meters. Some are equipped with lighting and ventilation, and are held up by wood and concrete. U.S. security forces are in search of efficient techniques for finding and destroying tunnels. One such technique is using a wireless, camera equipped robot, remotely navigated by a technician, which allows fast and safe examination of the tunnel. Some of the methods also include setting off explosives inside holes dug near the tunnels causing them to collapse in a controlled manner. 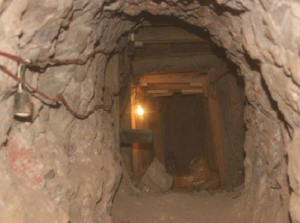 A tunnel discovered in Nogales, Arizona in 2014, Department of Homeland Security

It seems tunnel warfare is becoming a global concern as it is also common in other parts of the world such as Iraq, Afghanistan and Syria, where rebels use them in combating Assad’s military forces.

According to the market research company Meidata, it seems the old fashioned, simple warfare technique challenges modern technology so defense companies, security authorities and research centers continue to look for solutions. For example, U.S. Department of Homeland Security is collaborating with Lockheed Martin in developing systems for discovering tunneling activity. Raytheon is also working closely with the American army and utilizes technological solutions along the Mexico border. It has supported the Egyptian army as well and provided it with a radar for its battle against Hamas smuggling tunnels. Research institutes in the fields of geo-physics and energy are also putting forth efforts in this field.

* This article, written by the Meidata research team, appeared on August 17, 2014 on the Israel Homeland Security website.