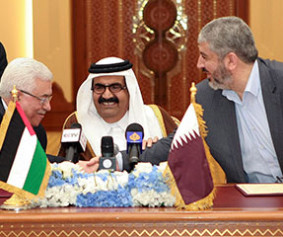 Aid to Hamas Boosts Terrorism Against Israel – Rachel Ehrenfeld – Estimates of the cost to rebuild Gaza, range from $455 million to $2 billion to $6 billion, depending on who’s estimating.  The highest figure comes, not surprisingly, from the Gaza-Hamas government. The lowest, surprisingly, from the UN. The United Arab Emirates has pledged $41 million for reconstruction of homes through an arrangement the Emirates Red Crescent organization. However, The Emirates and the Red Crescent have for decades supported the PLO, Palestinian terror groups and Hamas in particular. On July 27, 2005, the Palestinian Information Center carried a public Hamas statement thanking the UAE for it’s “unstinting support.”…more…

A Saudi Challenge to Israel – Rachel Ehrenfeld – The Saudi English-language newspaper Asharq al-Awsat published a thought -provoking op-ed regarding the latest round of Hamas’s confrontation with Israel. In an article titled No Longer an Arab-­Israeli Conflict, Mamoun Fandy, opines that Hamas’s attacks on Israel from Gaza is Iran’s doing with the help of the Muslim Brotherhood and its champions Qatar and Turkey. Indeed, Fars News reported today that the deputy Chief of Staff of the Iranian Armed Forces Brigadier General Massoud Jazzayeri announced: “The countdown has started for a change in the model of confrontation in the West Bank.” He went on to denounce “the rulers of certain Arab states, complaining that the Arab reactionary leaders have been acting on behalf of the US and Britain for tens of years.” He reiterated that there was “no limit for Iran’s humanitarian and other type assistance to the Palestinian people…and arms aid,” sparing no efforts, he added. This is but the latest attempt to lure the PLO’s Mahmoud Abbas-led Palestinian Authority (PA) to the Iranian camp, and to undermine the Saudi and Gulf Sunni influence in the Middle East.  Last week the commander of the Basij (paramilitary force), Brigadier General Modhammad Reza Naqdi, offered the same support to the Palestinians while claiming to represent the Muslim world and calling for “for the annihilation of the Zionist regime.” Fandy challenges Israel to take advantage of Saudi influence to reach an agreement with the Palestinians. However, he neglected to consider Iran’s latest offer to the PA, as well as Abbas’s double-crossing nature.…more…

Time to Stop Islamic Terrorism – Rachel Ehrenfeld – The Islamic State (IS) rapid advance in Iraq and Syria was anything but surprising, says Norman Bailey. While Israel’s Ambassador to the UN, Ron Prosor, warned the UN General Assembly to support the Jewish State in its efforts to stop the spread Islamic terrorism, if only for self-preservation.…more…

Barbarity – Sol W. Sanders – It is not the first time leaders of the civilized world have had to cope with a slide into barbarism which not only threatens international peace and stability but the very foundations of modern morality. Nor is it the first time that American leadership has been reluctant to take on the task of halting the destructive force. The horrendous beliefs and actions of the Islamic State of Iraq and the Levant, now styling itself as a Caliphate or the Islamic State, is almost nihilistic as they persecute and kill Muslims — whom they regard as renegade — as well as Christians and Yadizi. At the same time, we are witnessing another failure of American leadership to seize the issue and pursue it with maximum force. As part of the reluctance of the current American administration to recognize the continuing threat of Islamic extremism, it has historical analogies. It recalls the 1930s-40s’ determined obliviousness to the rise of Hitler and his destruction of European Jewry and the death of millions of Polish and Russian civilians, as well as more recent failures to cope with Kosovo or Rwanda massacres until they reached their zenith.…more…

More Cyberthreats, Less Cybersecurity – Rachel Ehrenfeld – The lack of cybersecurity continues to pose the biggest threat to the United States. Describing it “one of the most serious economic and national security challenges we face,” President Obama went on to issue Executive Order 13696, to Improve Critical Infrastructure Cybersecurity. This order led to the Enhanced Cybersecurity Services  (ECS) program — which requires the Department of Homeland Security to offer critical infrastructure industries protections against a “potential catastrophic hack.” The success of the program is dependent on public-private information sharing regarding cyber intrusions. The National Institute of Standards and Technology (NIST) was ordered to create a Framework for Improving Critical Infrastructure Cybersecurity. NIST’s first report, focusing mainly on homogenization of the format for reporting on cyber intrusions to the government was released on February 12, 2014. While DHS boasts about its active collaboration “with public and private sector partners every day to respond to and coordinate mitigation efforts against attempted disruptions and adverse impacts to the nation’s critical cyber and communications networks and infrastructure,” only three of 16 critical sectors–energy, communications services, and the defense industrial base–are part of the program.…more…

The Azzam Family: Like Father, Like Son? – J. Millard Burr – “Every Muslim on earth should unsheathe his sword and fight to liberate Palestine. The Jihad is not limited to Afghanistan. Jihad means fighting. You must fight in any place you can get. Whenever Jihad is mentioned in the Holy Book, it means the obligation to fight. It does not mean to fight with the pen or to write books or articles in the press or to fight by holding lectures.”  — Sheikh Abdullah Azzam, First Conference of Jihad, Al-Faruk Mosque, Brooklyn, New York, 1988. In late March 2006 Abu Musab al-Zarqawi, the Jordanian al-Qaeda militant who was then leading a coalition of Islamist militants giving battle to the US-led coalition forces, was relieved of command. The change in leadership came as a surprise because it was unexpected, and particularly because it was announced by Huthaifa Azzam — a surviving son of the renowned jihadist Abdullah Azzam.  The father, Palestinian-born, was a famed member and occasional spokesman for Jordan’s Muslim Brotherhood (Ikhwan al-Muslimun).  As one of the first so-called Arab-Afghan mujahedeen to do battle with the Soviet Union, he would acquire the label, “father of jihad.”  And with his arrival in Pakistan he was continuing the tradition of the Jordan Ikhwan that in April 1948 had sent a unit led by Abd al-Latif Abu Qura, head of the Muslim Brotherhood in Amman, to do battle with emerging state of Israel.…more…

Hamas manipulated and intimidated the media in Gaza. Why was that kept from us? – Alan Johnson

The Temptation of an Iran Deal: Maliki, the Mullahs and Obama’s Long Game. America and Iran both want Maliki out of power in Iraq. Does that make them strategic partners in the Middle East? – Walter Russell Mead

Kosovo Arrests 40 Suspected Islamist Militants. Move Is The Biggest Yet Against Suspected Militants in the Country – Wall Street Journal

A Terrorist Big Fish Gets Away: The Netherlands refuses to extradite FARC ally Hugo Carvajal Barrios to the U.S. – Mary O’Grady

Rising to the Authoritarian Challenge. U.S. policy on democracy support, especially during the Obama administration, has been largely reactive. We seem to be constantly playing (and mostly losing) a giant game of Whac-a-Mole. – Daniel Calingaert