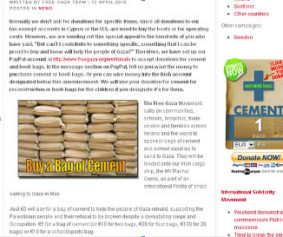 Left: FreeGaza call for donations to buy cement for “the civilian population” in the Gaza Strip after Operation Cast Lead (1] April 12, 2010). The pro-Palestinian organization represented the purchase of cement as humanitarian aid for the Gazans. Instead, it was used Hamas’ military buildup in the Gaza Strip.

Estimates of the cost to rebuild Gaza, range from $455 million to $2 billion to $6 billion, depending on who’s estimating.  The highest figure comes, not surprisingly, from the Gaza-Hamas government. The lowest, surprisingly, from the UN. The United Arab Emirates has pledged $41 million for reconstruction of homes through an arrangement the Emirates Red Crescent organization.

However, The Emirates and the Red Crescent have for decades supported the PLO, Palestinian terror groups and Hamas in particular. On July 27, 2005, the Palestinian Information Center carried a public Hamas statement thanking the UAE for it’s “unstinting support.” The statement said: “We highly appreciate his highness Sheikh Khalifa Bin Zayed Bin Sultan Al-Nahyan (UAE president) in particular and the UAE people and government in general for their limitless support…that contributed more to consolidating our people’s resoluteness in the face of the Israeli occupation”. The Hamas statement continued: “the sisterly UAE had… never hesitated in providing aid for our Mujahid people pertaining to rebuilding their houses demolished by the IOF… The UAE also spared no effort to offer financial and material aids to the Palestinian charitable societies.”

Indeed, as documented by the Intelligence and Terrorism Information Center, Hamas charitable societies, are known as integral parts of the HAMAS infrastructure, and are outlawed by Israel and the U.S. The Hamas statement included a special tribute: “One can never forget the generous donations of the late Sheikh Zayed Bin Sultan,” the father of the current UAE president. Sheikh Zayed bin Sultan al Nahayan of Abu Dhabi was the first Arab leader to understand the importance of waging economic Jihad against the West, and was the first to use oil as a political weapon following the Yom Kippur War in 1973. On the eve of the 1991 Gulf War he branded the United States “our number two enemy” after Israel. The multi-billionaire Sheikh Zayed, was an early patron of the PLO, and from the 1970’s until his death in 2004, contributed millions of dollars to the terror agenda of the PLO, Hamas and Islamic Jihad.

Human Appeal International, a UAE government-operated “charitable” organization, the board of which includes the UAE president, funds Hamas as well as other Palestinian organizations, “martyrs,” Palestinian terrorists in Israeli prisons and their families. The HAI’s modus operandi is to transfer money to the Palestinian Red Crescent Organization whose West Bank and Gaza branches are operated by Hamas. They, in turn, distribute the money to Hamas “charities.”

For example, the UAE “compensation” plan for the Palestinian intifada in 2001 included $3,000 for every Palestinian shaheed, $2,000 for his family, $1,500 for those detained by Israel, $1,200 for each orphan. In addition, families of those terrorists whose homes Israel demolished each received $10,000. Also in 2001, in support of the martyr’s families in the Palestinian intifada, two telethons were organized in the UAE. “We Are All Palestinians” raised 135 million dirham, or $36.8 million, and “For Your Sake Palestine” raised 350 million dirham, or $95.3 million. According to a detailed report on March 25, 2005, in the Palestinian daily Al Hayat al-Jadeeda, the UAE Friends Society transferred $475,000, through the UAE Red Crescent, to West Bank “charitable” organizations in Hebron, Jenin, Nablus and Tulkarem to distribute to the families of “martyrs,” orphans, imprisoned Palestinians and others.

The Palestinian newspaper Al-Ayyam reported on March 22, 2005, that in 2004 the UAE Red Crescent donated $2 million to Hamas “charities” to be distributed to 3,158 orphans of terrorists. On February 15, 2005, the Hamas website reported on funds transferred from HAI to two Hamas front organizations in the West Bank, IQRA and Rifdah, which Israel had outlawed. A month later Osama Zaki Muhammad Bashiti of Khan Younis in Gaza was arrested as he returned from the UAE for often transferring funds of as much as $200,000 at a time to the Gaza Hamas branch. The suicide bombing and attacks, including one mortar attack on Gush Katif, caused the death of 44 Israeli civilians and dozens of injuries.

The UAE support of Hamas is in line with the agenda promoted by the late Sheikh Zayed. His Zayed Center for International Coordination and Followup, founded in 1999 as the official Arab League think-tank, was shuttered under international pressure in 2003. It championed Holocaust deniers like Thierry Meyssan and Roger Garaudy and provided a platform for anti-Western, anti-Christian and anti-Jewish extremists like Saudi economist Dr. Yussuf Abdallah Al Zamel, who blamed the war in Iraq on “radical Zionist and right-wing Christian” influence.

Although the UAE professes to be a “strong ally of the U.S. in combating terrorism,” its continuing support of Hamas and other Islamist organizations contradict his statement. On July 24, 2014, the Wall Street Journal  reported the UAE has pledged $93 million, Kuwait $10 million, and Bahrain $5 million. Hamas supporter Qatar is said to be offering a $254 million plan to rebuild and modernize Gaza.

To rebuild, Gaza needs cement. However, since 2006, the Hamas-led government has slighted civilian needs in favor of building tunnels and other military infrastructure.  Accordingly, any support, including cement, to Hamas-ruled Gaza, means direct support of a terrorist organization whose major goal is to destroy Israel and kill its citizens. Why then does the Obama administration pressure Israel to sign an agreement with jihadists whose reason d’etre is to destroy the Jewish State? Would Obama sign an agreement with al-Qaeda? The ISIS?

The Meir Amit Intelligence and Terrorism Information Center details what happened to funds and cement contributions to rebuild Gaza in 2009.

1.   Cement is a vital commodity, and was needed by Hamas in the Gaza Strip and the Gazan civilian population after Operation Cast Lead to build new buildings and rebuild those that had been damaged during the operation. However, ITIC information at the time indicated that Hamas made wide use of the cement that reached the Gaza Strip or was manufactured there to rebuild its military infrastructure damaged in Operation Cast Lead, and to construct new military-terrorist facilities. A significant amount of the cement was allotted to building the extensive system of attack tunnels (exposed during Operation Protective Edge), smuggling tunnels, and defensive tunnels under Gaza’s urban landscape. The cement was also used to construct posts and facilities for weapons storage, military training and rocket launching.

2.   Allotting the cement to military purposes at the expense of Gazan civilian needs was part of Hamas’ strategic concept of giving priority to rebuilding and upgrading its military capabilities. Khaled Mashaal, head of Hamas’ political bureau, admitted as much at an Arab conference held in Damascus. In November 2009 he said that “Outwardly the visible picture is talks about reconciliation…and construction; however, the hidden picture is that most of the money and effort is invested in the resistance and military preparations…”[2]

3.   Given the limitations Israel placed on delivering cement into the Gaza Strip, in the years since Operation Cast Lead Hamas has used a variety of methods to acquire it to promote its military-terrorist needs. The most common method was smuggling large quantities in through the tunnels under the Egypt-Gaza Strip border. Other methods included manufacturing it themselves in factories in the Gaza Strip working under Hamas supervision; using building materials taken from the ruins of the Israeli settlements destroyed after Israel’s unilateral withdrawal from the Gaza Strip in 2005; and the commandeering of cement delivered into the Gaza Strip from international aid organizations or brought in by aid convoys. 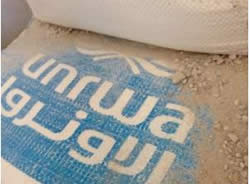 4.   For additional information about Hamas’ military use of cement in recent years, see the June 14, 2010 bulletin “The cement shortage in the Gaza Strip makes it difficult to carry out rehabilitation works and improve the living conditions of the population. However, reliable intelligence indicates that Hamas uses cement for military needs as part of its overall strategy of giving priority to its military infrastructure over Gaza Strip residents’ needs.”

[1]Free Gaza is an international pro-Hamas network whose stated objective is “breaking the siege” of the Gaza Strip. It played an important role in the flotilla project to the Gaza Strip and participated in the Mavi Marmara flotilla. [2]For further information see the August 3, 2014 bulletin “Prioritization of Hamas’ Military Buildup vs. the Gaza Strip’s Civilian Needs: Hamas’ genuine strategic priorities according to Khaled Mashaal, about a year after Operation Cast Lead.”

* This article appeared on August 11 on the Meir Amit website under the title “After Operation Cast Lead Hamas Used Cement Delivered to the Gaza Strip to Rebuild and Upgrade Its Military-Terrorist Infrastructure at the Expense of Civilian Needs.”