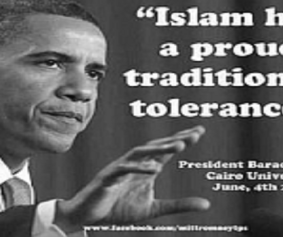 It is not the first time leaders of the civilized world have had to cope with a slide into barbarism which not only threatens international peace and stability but the very foundations of modern morality. Nor is it the first time that American leadership has been reluctant to take on the task of halting the destructive force.

The horrendous beliefs and actions of the Islamic State of Iraq and the Levant, now styling itself as a Caliphate or the Islamic State, is almost nihilistic as they persecute and kill Muslims — whom they regard as renegade — as well as Christians and Yadizi.

At the same time, we are witnessing another failure of American leadership to seize the issue and pursue it with maximum force. As part of the reluctance of the current American administration to recognize the continuing threat of Islamic extremism, it has historical analogies. It recalls the 1930s-40s’ determined obliviousness to the rise of Hitler and his destruction of European Jewry and the death of millions of Polish and Russian civilians, as well as more recent failures to cope with Kosovo or Rwanda massacres until they reached their zenith.

It is in the nature of ordered societies with democratic traditions to fail to comprehend the abilities and the growth of the enemy. Too often they “project”, as the Freudians would have it, their own beliefs and modus operandi on the competitor or enemy. [Pres. Obama and Sec. of State John Kerry keep up an infernal litany about how Russia’s Vladimir Putin is mistaken in not applying the new norms of international conduct. That’s as though Putin does not know he is challenging what he sees as their restrictions on his behavior.]

In the current scene in Iraq-Syria-Gaza, with the Obama Administration reluctance to be involved, taking halfway measures, using the camouflage of partially effective humanitarian relief, the unfolding events are all too historically typical. Local beheading, burial alive of victims, recruitment of young psychopaths is all too typical of recent events in the region.

But the threat is of a larger character and as dire as that posed by Fascism and Communism in the 20th century. For this squalid fanaticism is cloaked in the rationalization that it is based or lives in one of the major religious groups, Islam, with its more than 1.3 billion nominal adherents around the world, in a dozen different cultures. This particular evil, Islamic terrorism, despite the President’s professions of victory, is on the rise and spreading throughout the Muslim world at a rapid pace, even acquiring converts in the democratic societies.

The Obama Administration’s obfuscation of events is further obscured by the current intellectual climate in the U.S. with its enormous influence on world culture. It starts with the whole PC concept, the idea of what is “politically correct” – rationalizing group thinking which abhors and rejects criticism of its basic assumptions. [That speaker in opposition are denied their right to platforms in our most prestigious universities is an affront to the whole tradition of Western discourse and civilization.]

They include the notion that violence and counter-violence are no longer part of the human condition even though daily confronted with evidence to the contrary. Or they may include false definitions of what is Islam and the history of that religion and its more aggressive tendencies for the last 1600 years. It’s no wonder that the nomenclature for “politically correct” – if not its essence – arose among the Communists who were prepared to accept the adherence of important names in the arts and other celebrities so long as they called themselves Communists and echoed its political line even if they affronted some of its fundamental beliefs. [Picasso was the archetypal example.]

A corollary in the general PC agenda is the ability – and the irony — of the Islamicists to deflect criticism and action by their appeal to religious tolerance, now accepted in the Western world for several centuries. Radical Islam has the option, according to some twisted Muslim doctrines, to lie and practice deceit if it is in the promotion of Islamic conquest and conversion. The enemies of the whole American system of civil institutions among the jihadists, therefore, are able to exploit the accusation of “Islamaphobia” to prohibit an open and vigorous debate over the fundamentals of Islam and its relation to this generation of radicals and jihadists and other religions and cultures. This is coupled alas! With less than a hearty chorus of denunciation and avoidance of the jihadists by leaders of Muslim institutions of higher learning and its “clergy”. On the other hand, the fanatic jihadist preachers have full rein to all the avenues of publicity and propagation and recruitment including the new social media.

The second failure of logic — and thereby action — comes out of a false concept of deep intellectual thought which places our leadership above the everyday reactions of individuals. A superficial knowledge of history and application of a secular morality permits large sections of the American elite including the Washington bureaucracy to believe it understands the vast complication of issues thus permitting it to rise above them. By “understanding” all sides of the issues, it argues, it is able to take more judicious positions. That results in false “parities”. [The less than competent Ukrainian state is as “guilty” as their Russian-sponsored domestic enemies; because the Israelis spend their resources and effort on defending their population and therefore reduce casualties; they are on the same footing as Hamas “rising up against its restrictions” and suffering heavy casualties, the Muslim Brotherhood’s professions of commitment to democratic values make them the equal of Egypt’s military dictatorship trying to rescue a nation-state from chaos and poverty; Japan’s re-militarization in the face of a North Korea and Chinese Communist threat puts it on a par with Beijing’s outrageous territorial claims, etc., etc.]

This moral and intellectual ambiguity leads to a failing strategy.

It ignores the well-known fact that once engaged in battle, the vagaries of warfare make the outcome always dubious, despite obvious seeming disparities of weaponry. Famous battles throughout history have often, if not mostly, been decided by narrow margins of victory, and later disguised by facile historians with a straight-line backward projection to decision-making. [The Greeks did lose against superior Persian numbers and weaponry at Thermopylae but prepared the victory at Plataea.]

Therefore, “a measured response” in Iraq-Syria now is as likely to fail as those calculated responses led to the Korean stalemate and the final political defeat in Vietnam.

But this time the stakes may be greater for the insidious infection of jihadist conflict is universal, growing, and destined to be with the world for a generation at least. Then, of course, since nothing succeeds like success, the future depends on whether the U.S. and its allies throughout the civilized world can give the jihadists a knockout blow somewhere on the many fronts of the conflict – not excluding the ISIL as a primary target.

“Follow the Money No. 236.doc”. A version of this column will be published at yeoldecrabb.com on Monday, August 11, 2014