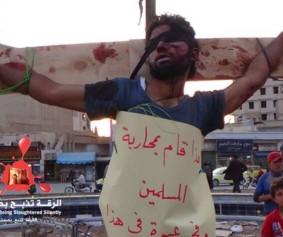 The Islamic State (IS) rapid advance in Iraq and Syria was anything but surprising, says Norman Bailey. While Israel’s Ambassador to the UN, Ron Prosor, warned the UN General Assembly to support the Jewish State in its efforts to stop the spread Islamic terrorism, if only for self-preservation.

The lightning successes of the Islamic State (IS) in Syria and Iraq, have given rise to two mysteries difficult to explain:

First, given the fact that IS is militantly anti-Shi’a and has made no secret of its hatred for the Shiites and its intention to wipe them out wherever it rules, it is strange that the reaction of the Islamic Republic of Iran has been so lackadaisical.

The commander of the Quds Force, international wing of the Iranian Revolutionary Guard, the famous (or infamous) General Suleimani, went to Baghdad immediately after IS swept across northern and western Iraq in June, giving rise to the expectation that the Revolutionary Guard would intervene in massive fashion to break the IS momentum and drive it back. But nothing much has happened since, except for the dispatch of some military advisors.

This is particularly curious because having IS sprawled across a vast territory in Iraq and Syria destroys the Iranian grand strategy of a Shi’a arc across the Middle and Near East from Iran to Lebanon, incorporating Iraq and Syria.

Equally puzzling is the less than tepid response to the slaughter, injuries, rape, theft of property of Christians and destruction and desecration of churches in the entire region. Leave aside for the moment the hundreds of thousands of Muslims of all types that have been massacred from Libya to Iraq, or the Yazidis, Circassians, Assyrians and other groups.

The destruction of millennia-old Christian communities in the region is unprecedented in its ferocity and grotesque barbarism, and yet governments, the media and the public in the West simply don’t seem to care, despite being supposedly “Christian” countries. Only the Vatican expresses grave concern, and there isn’t much the Swiss Guard can do about the situation.

Massive demonstrations are held and fiery editorials written supporting the Palestinian cause in Gaza, where civilian casualties on the Gazan side are in the dozens. There are only polite editorials condemning the treatment of Christians (and others) throughout the Middle East and North Africa. There are no demonstrations denouncing IS. Only Israel.

The conclusions are inescapable. The countries of the West are no longer Christian in any meaningful sense and for a multitude of reasons, including a huge increase in their Islamic populations along with a general breakdown of traditional Judeo-Christian civilizational values of morality and ethics, and finally a weakening dedication to the principles underlying political democracy. For all the same reasons there is a frightening upsurge of anti-Semitism, especially in Europe. In the Middle East, only Israel represents traditional Western political,social, economic and moral values.

And it is for that very reason that it is attacked and condemned.

Winston Churchill, one of the great architects of this institution, is remembered for his remarkable ability to perceive danger long before the rest of the world had woken up to the fact. In 1935, four years before World War II, Churchill criticized the international community for standing by as Germany rapidly rearmed. In his words: “The family of nations suffered from a want of foresight, an unwillingness to act when action would be simple and effective, and a lack of clear thinking and confusion of counsel until the emergency comes, until self-preservation strikes its jarring gong.”

The international community is once again facing the severe lack of foresight and unwillingness to see. Every day we are confronted by stories of radical Islamic terrorism: ISIS is purging Iraq of Christians, Boko Haram has kidnapped school girls in Nigeria, Al-Shabab gunmen are raiding fishing villages on the Somali coast. And yet this Assembly does not utter a word. It can only muster its outrage when Israel acts to defend its citizens.

The double standards are absolutely appalling. In Iraq, over 1,600 people were killed in July. In Libya, clashes between rival militias killed 200 people last month. In Nigeria, Boko Haram has slaughtered nearly 3,000 people this year. It may just be me, but I didn’t hear the Arab group rally to condemn these atrocities. Instead, this group gangs up against the only democratic nation in the Middle East that is defending its citizens from the totalitarian forces threatening every enlightened country in this Assembly.

It might be too much to ask you to stand on our side in this battle between civilization and barbarism. But at least have the decency to swallow your selective outrage as Israel wages war against the extremist groups, seeking to eradicate the values that we all hold very dear.

Israel is on the frontline of the war against radical extremism. The battle we fight today is the same battle that you all will fight tomorrow. Hamas, like ISIS and al-Qaeda, shares a disdain for democracy, a contempt for modernity, and a willingness to target innocent civilians.

And yet, some of you have abandoned the only democracy in the Middle East standing against the tide of terrorism. What does this say about your values? What does it mean for the next generation? This institution is being held hostage by some in this Assembly who are the worst human rights abusers.

The Arab nations, backed by some members of the non-aligned movement, ma have the numbers, but they don’t have the morals. They use the majority to convene special sessions, issue condemnations, and push through resolutions demonizing Israel. In fact, I won’t be surprised if the Arab states pass a resolution saying that the terror tunnels were actually simply an irrigation system, and that the rockets were nothing more than shooting stars.

There is only one way to achieve sustained quiet in Israel and build a peaceful and prosperous Gaza. Hamas must be disarmed, Gaza must be demilitarized. And the international community must divorce itself from the romantic notion of Hamas as ‘freedom fighters’.

Seventy years ago Winston Churchill bemoaned what he saw as the inability of mankind to act until the emergency comes. Today I am here to issue a warning: Stand with Israel and stand against terror before it is too late, before the danger lands on your doorstep and self-preservation strikes its jarring gong.

* Norman A. Bailey, Ph.D., is Adjunct Professor of Economic Statecraft at The Institute of World Politics, Washington, DC, and teaches at the Center for National Security Studies and Geostrategy, University of Haifa.  A version of this column will be published in Globes Israel on August 11, 2014.

** Amb. Prosor addressing  the U.N. is available on YouTube.