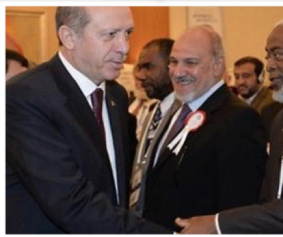 Turkey Reaches Out to Latin America’s Muslims – J. Millard Burr and Rachel Ehrenfeld – Since the fall of the Morsi government, Turkish Prime Minister Recep Tayyip Erdogan’s efforts have doubled to elevate his stature in the Muslim world and turn Turkey into the new center for the International Brotherhood (al-Ikhwan al-Muslimun). While the Ikhwan penetration of Europe has advanced for a half-century, little attention has been given to Latin America’s Muslims. To remedy the situation, for the first time in the history of the Ikhwan, the organization’s leadership has extended a hand of friendship to Muslim leaders of Latin America. Erdogan’s push into the Latin continent begun in 2006. On November 11th, Istanbul welcomed some seventy-six Muslim leaders to a four-day gathering labeled the First Latin American Muslim Religious Leaders Summit…Turkey’s dominant Directorate of Religious Affairs (DIB) played host…The President…Mehmet Gormez, opened a conclave that was based on the theme “Building Our Tradition and Future.”…noting in particular the oppression of minorities, internal conflicts, and economic problems that beset the Islamic community (ummah).…more…

Transportation Terrorism – Part II – Rachel Ehrenfeld – The art of war teaches us to rely not on the likelihood that the enemy’s not coming, but on our own readiness to receive him; not on the chance of his not attacking, but rather on the fact that we have made our position unassailable. Public and commercial transportation has become a choice target and a weapon for terrorists the world-over.  This presentation offers an overview of the threats, as well as solutions to mitigate them.…more…

The Persian Thread – Sol W. Sanders – It’s time for Paul Hollander to write a sequel to his marvelously insightful and humorous (after a fashion) 1981 “Political Pilgrims.”  For those kiddies for whom all this, and the environment in which it was written, is ancient history, may I remind you of Hollander’s goal he fulfilled so well. It was to expose those Western intellectuals who flitted from one Marxist paradise to another after even their initial infatuation with the Soviet Union could not be maintained. One thread runs through all the miasma of the tribal and ideological jungle of contemporary Mideast politics. Through it all is interwoven the power and influence of Iran.…more…

The Israeli Answer to Shoulder-Launched Missiles – Arie Egozi, Israel HLS – The process of equipping the aircraft used by the Israeli airlines with systems that protect them from shoulder launched missiles is on track. Following a successful ground test earlier this year, in addition to processing the data collected from a system that has been installed on an EL AL passenger aircraft, the “green light” was given for the installation of the series production systems. The installation was approved by the Israeli civil aviation authority (CAA) and is being performed by Israel Aerospace Industries (IAI). The threat of man-portable air defense system (MANPADS) has grown considerably over the last few years. Elbit Systems Electro-optics Elop’s C-MUSIC systems are a family of DIRCM (Directed IR Counter Measures) solutions for protecting aircraft against heat seeking ground to air missiles.…more…

Meet Hamas’s Popular Army’s First Battalion – Meir Amit Intelligence and Terrorism Information Center – Overview: 1.   On November 7, 2014, in the northern Gaza Strip, Hamas’s military wing, the Izz al-Din al-Qassam Brigades, presented the First Battalion (Al-Fawj al-Awwal) of the so-called Popular Army. The new battalion is called the Knights of Freedom Battalion. According to Hamas, the new battalion numbers 2,500 operatives. Its creation was announced during a ceremony marking the end of the first training course, held in the Jabaliya refugee camp in the northern Gaza Strip. The ceremony included a display of military capability, a parade and a march (Palinfo, Paldf, Filastin Al-’Aan, Al-Aqsa TV channel, November 7, 2014). 2.   Muhammad Abu Askar, a senior Hamas official in the northern Gaza Strip, spoke at the ceremony. He commented…that they are convinced that the battle against Israel will definitely come…that Hamas is getting ready and preparing its army so it will be ready for any encounter with Israel .…more…

Palestinian Vehicular Terrorism in Jerusalem – Meir Amit Intelligence and Terrorism Information Center –  On November 5, 2014, another vehicular attack was carried out in Jerusalem, killing a Border Police soldier and a civilian, wounding twelve, some of them seriously. Hamas rushed to claim that the Palestinian driving the vehicle was one of its operatives, and called for more vehicular attacks. It was the third vehicular attack carried out in Jerusalem in the past two months and the second targeting people at a light railway station (See the Appendix for a list of previous vehicular attacks). The attack was part of the wave of violence and terrorism currently being carried out by the Palestinians in east Jerusalem. The rising tensions are rooted in the murder of Palestinian youth Muhammad Abu Kheir, Operation Protective Edge and the visits of Israelis to the Temple Mount. The violence is manifested by the throwing of rocks and Molotov cocktails and the use of fireworks as weapons, especially in east Jerusalem. The main target is public transportation (buses and the light railway running through east Jerusalem)….Mahmoud Abbas and the Palestinian Authority (PA) leadership have actively encouraged acts of violence, regarding them as legitimate and part of the so-called Palestinian “popular resistance.”… Hamas and the other terrorist organizations glorify the terrorist operatives and their activities, and call for more violence and terrorism against Israel and to turn them into a “third intifada.”…more…

Iran’s nukes: Too desperate for a deal – John Bolton

Is Georgia Slipping Away? – Svante Cornell

Cuba’s Slave Trade in Doctors. Havana earns almost $8 billion a year off the backs of the health workers it sends to poor countries – Mary O’Grady

The Obama Whisperer. No one has understood Valerie Jarrett’s role, until now – Noam Scheiber

Commission on Security and Cooperation in Europe: To receive a briefing on Ukraine’s pivotal parliamentary poll, focusing on the conduct and results of the elections, as well as the potential for the newly elected parliament to confront the coming challenge of forging a democratic, secure, independent future for their strategically important country – Armed Services Committee – November 14, 2013

Department of Energy: Interagency Review Needed to Update U.S. Position on Enriched Uranium That Can Be Used for Tritium Production GAO-15-123: