The next Flotilla to Gaza may well include Latin Americans 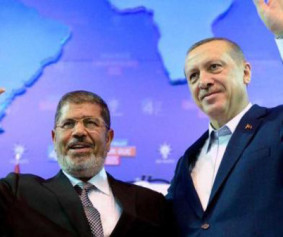 Since the fall of the Morsi government, Turkish Prime Minister Recep Tayyip Erdogan’s efforts have doubled to elevate his stature in the Muslim world and turn Turkey into the new center for the International Brotherhood (al-Ikhwan al-Muslimun). While the Ikhwan penetration of Europe has advanced for a half-century, little attention has been given to Latin America’s Muslims.

To remedy the situation, for the first time in the history of the Ikhwan, the organization’s leadership has extended a hand of friendship to Muslim leaders of Latin America. Erdogan’s push into the Latin continent begun in 2006. On November 11th, Istanbul welcomed some seventy-one Muslim leaders to a four-day gathering labeled the First Latin American Muslim Religious Leaders Summit.

Turkish deputy Prime Minister, Yalçın Akdogan, urged those present to “take action against anti-Islam propaganda across the world.” Turkey’s dominant Directorate of Religious Affairs (DIB) played host to representatives from all Latin American countries. The President of Religious Affairs, Professor Mehmet Görmez, opened a conclave that was based on the theme “ Building Our Tradition and Future.” Görmez opened the meeting with remarks on “the current global problems Muslim communities face as a community,” noting in particular the oppression of minorities, internal conflicts, and economic problems that beset the Islamic community (ummah).

As often is the case, especially these days, the presence of the Ikhwan was downplayed and obfuscated, and this summit’s organizers claimed their agenda was not “to impose any ideology, or shift the current conflicts in Muslim regions to other lands, but rather to initiate a dialogue to discuss the opportunities for cooperation, and relationship building in religious, historical and cultural areas, as well as sharing experiences in religious education and services.”

In his speech, Görmez admitted, given the years of tribulation that had impacted the Muslim world, it took some time to reach out to Muslims in Latin America. “Today, we gathered to rebuild the brotherhood we have long neglected and exchange views with brothers we have not heard from for decades.” The meeting was also attended by religious organizations from Africa, Europe and the Middle East — the Eurasian Islam Council, the African Religious Leaders Summit, the Meeting of European Muslims, the Balkans Meeting of Religious Directorate Leaders, and the World Islam Scholars’ Peace, Moderation and Foresight Initiative.

The participants discussed the need for “religious leaders who speak Spanish and religious books in Spanish,” and called to create easily accessible credible online sources of Islam.

Certainly, Görmez has been busy since mid-year. Last August he denounced the pronouncements of the Islamic State (IS, ISIL, ISIS; Da’esh) to declare a caliphate (khilafa) with Abu Bakr al-Baghdadi as caliph (khalifa), claiming they contradict Islam: “Their actions may perhaps be explained by medical and psychiatric terms,” he said. Clearly, Turkey, home to the last caliph, is not ready to relinquish its claim to the Islamic Caliphate.

In October, while serving as the official delegate of Turkey’s Department of Religious Affairs during his pilgrimage (hajj) to Saudi Arabia, he announced that Turkey was about to found a new Islamic university in Istanbul. Although he would deny it, it was unspoken, but obvious, that in the wake of the Ikhwan disaster in Egypt, Görmez and Erdogan, were planning an alternative to compete with Cairo’s renowned Al Azhar University, the Muslim World’s primary institution of learning. Görmez concluded that the Turkish exertion would be “an important project for humanity.”

Just how the Latin representatives will respond to the Turkish overtures bears watching, if for no other reason than the Sunni Muslims have had reason to fear Shiite inroads in Latin America. The Hezbollah is very powerful in the Argentina-Brazil-Paraguay tri-border region. In Brazil alone the Muslim population is estimated to be approximately one million people. Since the Iranian President Mahmoud Ahmadinejad’s promise of $1.1 billion in aid to Bolivia, during his visit to La Paz in 2007, Iran continued in a more overt way what was already a serious effort to make an impact in Latin America. The “summit” held in Istanbul, is likely the first step to counter the Iranian influence.

With Turkish support, the hour is at hand for the Muslim Brothers to organize chapters in Latin America. If that is so, should its governments be on the qui vive?

* In the meantime, growing Muslim Brotherhood activities are likely to lead Latin American Muslims and especially converts to join the next Flotilla to Gaza, and their governments to support of Hamas...(iHLS)