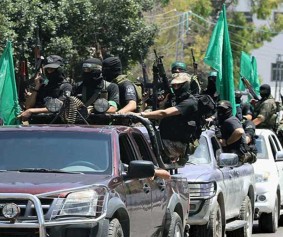 Hamas has presented the first battalion of the Popular Army, to serve as an auxiliary force for the operatives of Hamas’s military wing in confrontations with Israel Palestinian youths in the Hamas Popular Army holding M-16 rifles and a Hamas flag at the ceremony marking the end of the training of the first battalion  (Palinfo, November 7, 2014)

1.   On November 7, 2014, in the northern Gaza Strip, Hamas’s military wing, the Izz al-Din al-Qassam Brigades, presented the First Battalion (Al-Fawj al-Awwal) of the so-called Popular Army. The new battalion is called the Knights of Freedom Battalion. According to Hamas, the new battalion numbers 2,500 operatives. Its creation was announced during a ceremony marking the end of the first training course, held in the Jabaliya refugee camp in the northern Gaza Strip. The ceremony included a display of military capability, a parade and a march (Palinfo, Paldf, Filastin Al-’Aan, Al-Aqsa TV channel, November 7, 2014).

2.   Muhammad Abu Askar, a senior Hamas official in the northern Gaza Strip, spoke at the ceremony. He commented on the events at the Al-Aqsa mosque, saying that the presentation of the first training course is taking place at a time when the Al-Aqsa Mosque is subject to “harassment by Israel” and that they are convinced that the battle against Israel will definitely come. He said that Hamas is getting ready and preparing its army so it will be ready for any encounter with Israel (Safa News Agency, November 7, 2014). 3.   At the end of September 2014, Hamas’s media reported that Izz al-Din al-Qassam Brigades operatives had begun preparations for the establishment of a Popular Army. The Popular Army has recruited civilian volunteers of all ages. The purpose of the recruitment and training of volunteers is to set up an auxiliary force for the operatives of the Izz al-Din al-Qassam Brigades, the military wing of Hamas, in a future conflict with Israel.[1]

4.   Muhammad Abu Askar also announced the opening of registration for the second training course for all those interested, aged twenty and over, saying that it would open soon (Safa News Agency, November 7, 2014). The first recruitment call at the end of September 2014 referred to civilians of all ages (aged 14 and over). The photos in our possession (see Appendix) create the impression that the participants in the first training course were very young.

5.   It is not yet clear how big the Popular Army will be, but completion of the training of a battalion of 2,500 operatives and preparations to open a second course may indicate that the force will number thousands of operatives and will serve as an auxiliary militia of the semi-regular forces of the Izz al-Din al-Qassam Brigades. In the ITIC’s assessment, such a force is needed in order to expand the military wing’s future cadre and the circle of support for Hamas, with an emphasis on popular support for the military wing on the day after Operation Protective Edge.

6.   The inclusion of teenagers in the military activities of Hamas and other terrorist organizations in the Gaza Strip is a familiar phenomenon. Mobilization of large numbers into the ranks the Popular Army in the first training course is liable to increase the involvement of teenagers in fighting against the IDF in ongoing incidents and in a new round of fighting in the future. The activity of these teenagers in the ranks of terrorist organizations is liable to provide Hamas with a propaganda tool for Israel-bashing (in the event of the death of teenagers in military confrontations) and to make it even harder to distinguish between operatives in established military units and non-involved civilians.[2]

Graduates of the first training course demonstrate their abilities Left: Palestinian teenager in a Popular Army uniform, holding a rifle and practicing getting out of a vehicle (Palinfo, November 7, 2014). Right: Military parade of Popular Army combatants with camouflage makeup Military exercises presented by the soldiers of the Popular Army at the ceremony marking the end of the training of the first battalion (Al-Aqsa TV, November 7, 2014)

[1]See the ITIC Information Bulletin from September 30, 2014: “Hamas-affiliated media report: the Izz al-Din al-Qassam Brigades has begun establishing a “popular army” for the next confrontation with Israel.”Moussa Abu Marzouq, a member of Hamas’s political bureau, previously denied reports about the establishment of the Popular Army. He wrote on his Facebook page that the rumors that Hamas intends to establish a Popular Army are incorrect.
[2]See the ITIC Information Bulletin from September 18, 2014: “The War of Casualties: An examination of the names of Palestinians killed in Operation Protective Edge revealed several instances of children and teenagers serving as military operatives in the terrorist organizations. The examination also revealed instances in which the ages of Palestinian casualties were falsified by Gaza’s Hamas-controlled health ministry. The extent of the phenomenon is still unclear.”

This article was published by The Meir Amit Intelligence and Terrorism Information Center on September 11, 2014.