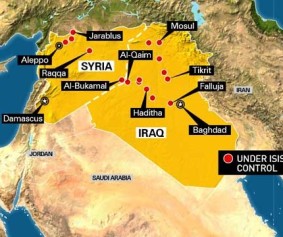 The Islamist Plague – Rachel Ehrenfeld – Many Western commentators have adopted the narrative that al Qaeda and its ilk are the exception to the “religion of peace” — Islam. Even Hamas, the barbaric Muslim Brotherhood’s Palestinian branch, a U.S. designated terrorist organization dedicated to the destruction of Israel and to establishing the Islamic State (caliphate), just as ISIS, has apparently succeeded in portraying itself a “potential partner for peace, as headlines such as “Hamas Just Lost Its Ticket To Respectability” show. Hamas, al Qaeda, ISIS, Iran and Sudan advance their Islamic agenda under the guise of “Political Islam.” The brainchild of the Muslim Brotherhood, “Political Islam” is akin to a highly infectious disease that its spread can only be halted by identifying and eliminating the sources of infection. Incredibly, despite the mortal danger posed by the increasingly violent global jihadist movement, the United States and the West, refuse to identify the sources of the Islamists plague. Instead, they are trying to negotiate with it, in Gaza, in Syria, in Iraq, in Iran and in Africa.…more…

What Peace Process? – Lawrence J. Haas – The murder of three Israeli teens reveals there is no hope for a “peace process” anytime soon. As the parents of three Israeli teens live their worst nightmare, their sons the latest victims of terror, the drama can now follow a well-worn path of Palestinian triumphalism, Israeli revenge and global moral blindness. It is but another teaching moment — lest anyone still needs one — about why Israeli-Palestinian peace will not come soon and why the basic assumptions behind the “peace process” are so off-base. That U.S.-led process presumes that the Israeli-Palestinian conflict rests on disputes about what a future Israel and new Palestine would entail for borders, security, Jerusalem and refugees. That the horror of recent days so obviously belies such presumptions will not deter the peace process’ biggest backers.…more…

Turkey: Between Iraq and Some Hard Choices – Norman Bailey – Recent events in the Middle East have placed Turkey in a most uncomfortable situation, with hard choices and few options. After supporting the Islamic State of Iraq and the Levant (ISIL), an ultra-violent jihadist group which split with its al-Qaida sponsor after its leader was killed in Iraq and moved operations to Syria to fight the Assad regime, Turkey is now faced with dealing with an ISIL at least temporarily triumphant in northern and western Iraq as the result of a lightning offensive earlier in June which saw US-trained Iraqi forces melt away before its advance.…more…

What Does an “Islamic Caliphate” in Iraq Mean? – Jonathan Halevi

The Man and the Myth: The many faces of Hassan Rouhani – Ali Alfoneh, Reuel Marc Gerecht

Farah Diba Pahlavi: The United States attempted to hand over the Shah to Khomeini in the Azores – Margardia Santos Lopes