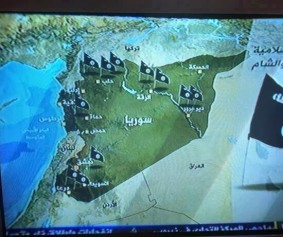 Many Western commentators have adopted the narrative that al Qaeda and its ilk are the exception to the “religion of peace” — Islam.

Even Hamas, the barbaric Muslim Brotherhood’s Palestinian branch, a U.S. designated terrorist organization dedicated to the destruction of Israel and to establishing the Islamic State (caliphate), just as ISIS, has apparently succeeded in portraying itself a “potential partner for peace, as headlines such as “Hamas Just Lost Its Ticket To Respectability” show. Hamas, al Qaeda, ISIS, Iran, and Sudan advance their Islamic agenda under the guise of “Political Islam.”

The brainchild of the Muslim Brotherhood, “Political Islam” is akin to a highly infectious disease that its spread can only be halted by identifying and eliminating the sources of infection. Incredibly, despite the mortal danger posed by the increasingly violent global jihadist movement, the United States, and the West, refuse to identify the sources of the Islamists plague. Instead, they are trying to negotiate with it, in Gaza, in Syria, in Iraq, in Iran, and in Africa.

The pioneers of the 20th Century Political Islam were Iran and Sudan. And as the Soviet Union imploded and Islamist fundamentalism exploded, Muhammad replaced Marx and Lenin, and radical Islam replaced the socialist-nationalist doctrines of the Arab revolutionaries. The collapse of the Soviet Union served as the catalyst for an alliance between radical Sunni and Shiite movements that helped to revive Islamist fundamentalism. The spread of the Islamist ideology was paid for by the oil-rich Arab/Muslim states, which also used their money to buy Western “opinion makers,” including businessmen, politicians, the media, and academics.

New communication technologies allowed the increasingly vitriolic Islamist rhetoric to spread instantaneously. Instead of taking measures to stop the instructive incitement for murder, the West sank further into appeasement, thus encouraging the spread of the jihadist agenda.

While the bloody attacks of ISIS and Hezbollah in Iraq and Syria are portrayed as a Sunni vs. Shiite struggle, the role of Ayatollah Khomeini, as the leader of the “Islamic Revolution,” should not be forgotten.

After successfully taking over Iran, the Ayatollah Khomeini began calling for the unification of Muslims throughout the world, and for exporting his Muslim Revolution to wherever Muslims live so that Muslim domination could be achieved. “We are at war against Infidels,” the Ayatollah told a large group of Pakistani military officers on a pilgrimage to Qom in January 1980. “Take this message with you … I ask all Muslims [emphasis added] … to join the Holy War. There are many enemies to be killed or destroyed. Jihad must triumph.” He stressed that the “Iranian Experiment” should be followed and that the realization of the true Islamic State should be carried out forcibly and without compromise.

These plans for Islamic unification were accelerated by the Gulf War. The war helped the leaders of Islamist groups throughout the globe to enforce their vision that jihad, holy war, is the only formula for protecting Islam from extinction by the West — led by the U.S. This opinion was and is repeatedly voiced by every Islamist leader. “Bush and Thatcher have revived in the Muslims the spirit of Jihad and martyrdom,” wrote the Palestinian leader of the Islamic Jihad, Sheikh As’ad Bayyud al-Tamimi. He promised that all Muslims “will fight a comprehensive war and ruthlessly transfer the battle to the heart of America and Europe.” Despite the advancement of the ISIS, many in the West continue to dismiss such statements as pure rhetoric. Instead, they are hanging on to statements, made by Muslim and Arab leaders and politicians, that ISIS and the other jihadis are aberrations that should be eliminated.

The U.S. and other Western countries are trying, again, to negotiate, i.e., submit to demands of their mortal enemies, supposedly to avoid further escalation, often accepting statements the like of which were made by Egyptian Sunni theologian Mahmud Shaltut (1893-1963), in his al-Qur’an wal-Qitāl:

“Muhammad revealed a book [the Quran] containing the principles of happiness. It commands to judge by reason; it propagate science and knowledge, it gives clear rules, it proclaims mercy, it urges to do good, it preaches peace, it gives firm principles concerning politics and society, it fights injustice and corruption.”

He also declared, “The Islamic community is commanded to do only what is good and are forbidden to do what is reprehensible and evil. The Islamic mission is clear and evident, easy and uncomplicated. It is digestible and intelligible for any mind. It is a call of natural reason, and therefore not alien to human intellect. This is the mission of Muhammad to humanity.”

Shaltut’s argument: “it is the interest of humanity to gather enthusiastically under Islamic rule,” has not been universally accepted. But as long as the U.S. refuses to identify the source of the Islamic plague – the ideological dogma behind both Sunni and Shiite jihadi movements, it will be impossible to develop a successful vaccine to inoculate against it and take the actions necessary to stop the Islamist infection.