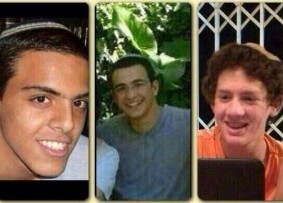 The murder of three Israeli teens reveals there is no hope for a “peace process” anytime soon.

As the parents of three Israeli teens live their worst nightmare, their sons the latest victims of terror, the drama can now follow a well-worn path of Palestinian triumphalism, Israeli revenge and global moral blindness. It is but another teaching moment — lest anyone still needs one — about why Israeli-Palestinian peace will not come soon and why the basic assumptions behind the “peace process” are so off-base.

That U.S.-led process presumes that the Israeli-Palestinian conflict rests on disputes about what a future Israel and new Palestine would entail for borders, security, Jerusalem and refugees. That the horror of recent days so obviously belies such presumptions will not deter the peace process’ biggest backers.

The June 12 kidnapping of West Bank teens Naftali Fraenkel, Eyal Yifrah and Gil-Ad Shaer by two Hamas operatives, their murder soon after, and the discovery of their bodies — bound and partially buried in an open field — occurred amidst a broader resurgence of terror in the Palestinian territories.

First came the reconciliation pact between Fatah, the party of the Palestinian Authority that controlled the West Bank, and Hamas, the terrorist offshoot of the Muslim Brotherhood that ran Gaza, giving official Palestinian legitimacy to the Hamas agenda — reject peace, deploy terror, destroy Israel and claim all land from the Jordan River to the Mediterranean Sea for a new “Palestine.”

Then came a resumption of rocket fire over the last two weeks from Gaza into southern Israel, igniting alarms, inciting fear and prompting Israel’s Air Force to strike terrorist targets in response. With the rocket fire increasing, an official of Hamas announced that it had reached a pact with Palestinian Islamic Jihad, another terrorist group in Gaza, to “unify the weapons of resistance” against Israel. “There will be no security for the Zionists over and under the land,” the Hamas official, Mahmoud al-Zahar, declared prophetically in a speech in Gaza. “We are prepared to sacrifice our blood for the sake of Palestine, and we advise the Zionist enemy not to play with us.”

The expanding terror of late also drives another nail into the coffin of hopes that governance will moderate extremist forces. It didn’t happen to the terrorist group Hezbollah after it gained political power in Lebanon, it didn’t happen to Hamas after it overthrew the Palestinian Authority in Gaza, and it isn’t happening to Hamas now as it begins to share responsibility to govern all Palestinian territory.

Indeed, Hamas marked the kidnappings with public rallies; Fatah created a cartoon of three mice, each with a Star of David, dangling from a string; and young Palestinian children held up three fingers in a sign of celebration. Not surprisingly, Hamas Chief Khaled Mashaal praised the kidnapping as heroic, called the teens “settlers and soldiers in the Israeli army,” and, while refusing to confirm Hamas’ role, proclaimed, “Blessed be the hands that captured them. This is a Palestinian duty, the responsibility of the Palestinian people.”

Now, with the murders confirmed and Israel sure to respond forcefully, the region and world can play their usual role, bemoaning less the murders themselves than what they will describe as Israel’s “overreaction.” That process was already underway in recent days as Israel sought to find the teens, searching more than 1,500 locations on the West Bank and arresting more than 400 Palestinians, most of them Hamas members.

Top officials from Arab and Muslim states vowed to ask the United Nations Security Council to investigate not Hamas, which perpetrated the terror, but Israel. The officials included ambassadors from Saudi Arabia, Iran, Qatar, Senegal and the League of Arab States, as well as the Palestinian ambassador.

As Israel now turns from a search for teens to a response to terror, options surely will include the pinpoint killings of Hamas’ leaders, a broader round-up of Hamas operatives and a pounding of Hamas weapons caches. Whether Fatah also pays a price for its governmental partnership with Hamas remains to be seen.

However much such Israeli responses seem justified, expect the usual global Israel-bashing in return. Expect the world to react in horror to Israel’s action, demand a cessation of hostilities, blame the entire episode on Israeli settlements and human rights abuses, and mindlessly bemoan another “cycle of violence.” Expect the media to quickly forget the three Israeli teens and focus its attention squarely on Palestinian suffering. Expect Washington to counsel Israeli moderation and, if Jerusalem resists, join the chorus of global condemnation.

Then, expect a wounded but affirmed Hamas to plot its next move.