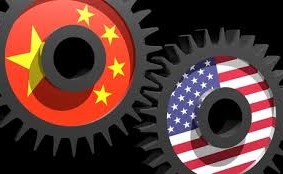 FCC to China – “Stop! Or, or I’ll Say Stop Again!” – Rachel Ehrenfeld – The Justice Department and the Federal Communications Commission (FCC) seem to model themselves after British policemen, popularly known as “bobbies,” whose only regular weapon is a short, wooden truncheon, which they keep out of sight and may not employ except in self-defense or to restore order. In response to Chinese hackers and companies selling jamming devices to interfere with our reception of signals from the United States Global Positioning System (GPS), they issue indictments and Notices that cannot be enforced. It seems that the idea behind this is to demonstrate that the U.S. government is committed to challenge the Chinese. Hardly.…more…

Western Economic Policy Still Fighting Wrong Battle – Norman Bailey – Labor is steadily becoming less valuable than capital, and boosting liquidity won’t help.The US government recently lowered its estimate of economic growth for 2014 to slightly over two percent. During the first quarter of the year GDP growth was actually negative. The European Central Bank unveiled a new basket of monetary measures to try to jumpstart the European economy. These measures were greeted with a universal yawn, since they amounted to increasing liquidity even further into an economy already drowning in liquidity. The “great” innovation was charging a tiny negative interest on balances commercial banks choose to hold at the ECB, which will supposedly provide...more…

Mexico: Mañana is Here – Sol W. Sanders – Much has changed, obviously, since 1989 when I published “Mexico: chaos on our doorstep.” As so often has happened, my timing was bad. The book’s research identified a problem prematurely and the title raised hackles among some Latin American specialists, most of whom had a more optimistic view. But what led me to write the book may still be relevant. It was my “discovery” of the startling fact that the 1500-mile U.S.-Mexican border was the only land frontier between what in those days was called The Third World, preindustrial, poverty-stricken, and unstable societies, and the First World of a few “developed” European and North American countries, Australasia and Japan. Ultimately.…more…

Khrushchev Gave Away Not Only Crimea to Ukraine But Alaska to US as Well, Moscow Commentary Says – Paul Goble

Thailand: A Democracy in Peril – Foreign Affairs Committee, Subcommittee on Asia and the Pacific – June 24, 2-14

Libya at a Crossroads: A Faltering Transition – Foreing Affairs Committee, Subcommittee on the Middle East and North Africa – June 25, 2014