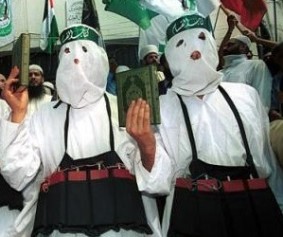 Whitewashing Hamas – Rachel Ehrenfeld – The siding with Hamas, which uses Gaza’s residents – most of whom support the terrorist group’s agenda – as human shields –  is not limited to outsiders. The Israel based organization B’Tselem, which for years has actively promoted alleged Israeli violations of Palestinian human rights, has also directly contributed to Hamas’s tunnel building efforts. Last year, for example, B’Tselem  reported  that “contractors and construction laborers in the Gaza Strip depicted a harsh reality in which projects are put on hold due to lack of materials. They related that contractors were forced to dismiss employees, so that thousands of people, most of whom support large families, lost their livelihood.” Not surprisingly, this report led to harsh international criticism of Israel. However, “The construction of attack tunnels and underground lairs came at a time when Gaza was appealing to the world to be relieved of limitations on the importation of cement on humanitarian grounds,” so they could build schools, hospitals, sewage systems or housing. Instead, with B’Tselem’s help, it was used to build the vast sophisticated tunnel network from the Gaza Strip to the Israeli and Egyptian borders.ACD Fellow Jonathan D. Halevi reports on B’Tselem “manipulation and propaganda” directed at the Israeli public, which is under constant barrage of rockets from Gaza, likening an IDF Brigade Commander to a senior Hamas terrorist.…more

The “Moral Equivalence” – Hamas, ISIS and the Media – Rachel Ehrenfeld – Hamas fighting methods in the current round of Israel’s Operation Protective Edge illustrate, yet again, the practical and ideological proximity between Hamas and the atrocious radical Islamic organization the “Islamic State” (ISIS). However, Hamas’s effective use of “public opinion” and all media venues is second to none. Hamas and the ISIS have proven that its terrorist policy has no moral restrictions. From the onset, Hamas, and the ISIS, have directed their massive and ongoing murderous attacks against civilian targets to cause as much carnage as possible. Unlike ISIS, while losing their military power, Hamas is cleverly using Gazans as human shields and the gullible media to pave the way to a strategic victory.…more…

The Muslim Brotherhood: Breaking Rice Bowls – J. Millard Burr and Rachel Ehrenfeld – Let no one doubt. Within Islam, no censure is assigned to the personal accumulation of wealth.  And no known member of the Muslim Brotherhood (Ikhwan al-Muslimun) has been condemned for either the pursuit or the accumulation of wealth. Muslim scholars gathered in Istanbul last week to debate the ‘Caliphate’ declared recently by the ISIS (Islamic State of Iraq and the Levant), aka IS), the Sunni terrorist group that operates in Iraq and Syria. Titled “World Islamic Scholars: Peace, Moderation and Common Sense Initiative,” delegates from Egypt, Iraq, Lebanon, Saudi Arabia, Syria and other countries gathered in Istanbul. The meeting was attended by Turkey’s President Abdullah Gul, Prime Minister Recep Tayyip Erdogan, and Foreign Minister Ahmet Davutoglu, and the President of Turkish Religious Affairs (Diyanet) chaired the event. Erdogan is a known Muslim Brother, and Gul is certainly an Islamist if not a declared Ikhwan. Davutoglu, an emerging member of Erdogan’s Justice and Development Party (AKP), has a special interest in the Balkans. He is known for his close association with Mustafa Ceric, a senior member of Europe’s Muslim Brotherhood branch and a participant in the U.K.-based “Radical Middle Way” movement involving numerous Ikhwan scholars.…more…

Hamas’s Use Medical Facilities and Ambulances for Military-Terrorist Purposes – Meir Amit Intelligence and Terrorism Information Center – Al-Shifa’a Hospital and Ambulances Used for Military-Terrorist Purposes in Operation Protective Edge 1. Hamas and the other terrorist organizations have frequently made use of hospitals and other medical facilities for various military purposes. That is because they know the IDF does not attack medical facilities, and using a medical facility provides their terrorist operatives located there with a kind of immunity. For the same reason they use ambulances to move terrorist operatives and weapons from place to place in combat zones. They repeat the modus operandi in Operation Protective Edge. 2. William Booth wrote in the Washington Post on July 15, 2014, that “At the Shifa Hospital in Gaza City, crowds gathered to throw shoes and eggs at the Palestinian Authority’s health minister, who represents the crumbling ‘unity government’ in the West Bank city of Ramallah. The minister was turned away before he reached the hospital, which has become a de facto headquarters for Hamas leaders, who can be seen in the hallways and offices” (ITIC emphasis). Washington Post correspondent Nick Casey Tweeted that Hamas used the Al-Shifa’a Hospital as a “safe place” to meet with the media.…more…

Tunnels Blunder – One of the Biggest Ever Mistakes – Arie Egozi – This is nothing less than one of the biggest blunders in the history of the Israeli defense establishment. Right under the nose of the IDF in Gaza, Hamas has formed many underground attack tunnels. Residents of the Gaza vicinity have heard the sounds of shoveling and voices, so says intelligence information. One man who has been claiming this for a long time is geologist Yossi Langotsky. Colonel (Ret.) Langotsky, who is now known  as the father of the Tamar and Dalit gas discoveries, formerly established the Special Operations Branch of Military Intelligence and the control unit technology’s operational wing. There, he won two Israel Security awards — both personal and for his unit for developments he led. “This was a big mistake not to employ the intelligence to discover it,” says Langotsky.  Three times he contacted the Defense Ministry to help find a solution — and three times those bodies had failed to heed help and advice from the Geophysical Institute — which they offered to volunteer.…more…

Testing, testing, testing… – Sol W. Sanders – The horror of 298 innocents, oblivious to the warfare 33,000 feet below them, blown out of the sky by criminally negligent fanatics supported by Russian Vladimir Putin, forebodes greater catastrophes. The incident is a part of a worldwide scene wherein Pres. Barack Hussein Obama’s strategy of withdrawal from what he — and a large part of the apolitical war-weary American people – sees as overreaching worldwide projection of U.S. power. But Obama’s clumsy retreat has led to a continuing welter of probes by opponents – and even allies — of Pax Americana. Whatever the merit of arguments about a declining U.S., its power and influence on the rest of the contemporary world remains enormous. Obama’s withdrawal creates an international and regional power vacuum, setting up the kind of ambiguities that throughout history has led to mis-perceptions, and, often, major wars.…more…

Tunnels Matter More Than Rockets to Hamas: The terror group wants to infiltrate Israel to grab hostages and stage attacks as in Mumbai in 2008. – Michael Mukasey

The Moral Chasm Between Israel and Hamas. The 3-mile-long tunnel from Gaza was designed for launching murder and kidnapping raids. – James Conway

Bad Move to the U.N. The General Assembly is a terrible place to hold the Iran nuclear talks. – Claudia Rosett

To Maintain Himself in Power, Putin Will Continue to Maneuver on Ukraine, Piontkovsky Says – Paul Goble

Putin’s Secret Weapon: Russia’s swashbuckling military intelligence unit is full of assassins, arms dealers, and bandits. And what they pulled off in Ukraine was just the beginning – Mark Galeotti

Shooting in the Air. Russia’s operatives could be taken to the International Criminal Court for their role in the downing of flight MH17 over Ukraine. Even ICC skeptics in America ought to be open to this approach – Ruth Wedgwood

Frozen in the Cold War. The roots of Obama’s weakness abroad – Matthew Continetti

The Future of US – China Relations – Foreign Relations Committee – June 25