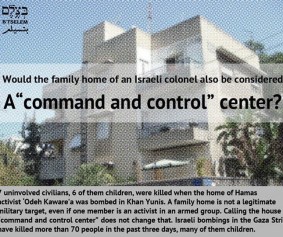 The siding with Hamas, which uses Gaza’s residents – most of whom support the terrorist group’s agenda – as human shields –  is not limited to outsiders. The Israel based organization B’Tselem, which for years has actively promoted alleged Israeli violations of Palestinian human rights, has also directly contributed to Hamas’s tunnel building efforts.

Last year, for example, B’Tselem  reported  that “contractors and construction laborers in the Gaza Strip depicted a harsh reality in which projects are put on hold due to lack of materials. They related that contractors were forced to dismiss employees, so that thousands of people, most of whom support large families, lost their livelihood.” Not surprisingly, this report led to harsh international criticism of Israel.

However, “The construction of attack tunnels and underground lairs came at a time when Gaza was appealing to the world to be relieved of limitations on the importation of cement on humanitarian grounds,” so they could build schools, hospitals, sewage systems or housing. Instead, with B’Tselem’s help, it was used to build the vast sophisticated tunnel network from the Gaza Strip to the Israeli and Egyptian borders.

ACD Fellow Jonathan D. Halevi reports on B’Tselem “manipulation and propaganda” directed at the Israeli public, which is under constant barrage of rockets from Gaza, likening an IDF Brigade Commander to a senior Hamas terrorist.

On July 10, 2014, a poster titled: “Would the family home of an Israeli colonel [the Hebrew version of the poster reads “IDF Brigade Commander”] also be considered a “command and control” center?” On the background of a picture featuring a private detached house the following was written: “7 uninvolved civilians, 6 of them children, were killed when the home of Hamas activist ‘Odeh Kaware’a was bombed in Khan Yunis. A family home is not a legitimate target, even if one member is a activist in an armed group. Calling the house a ‘command and control center’ does not change that. Israeli bombing in the Gaza Strip have killed more than 70 people in the past three days, many of them children. ”Be’Tselem: “family homes” belonging to Hamas operatives are not legitimate targets. On July 9, 2014, B’Tselem published a press release titled: “Bombing family homes of activists in armed Palestinian groups violates international humanitarian law.” In this press release B’Tselem stated the following:

“Bombing the homes of senior activists in armed groups violates international humanitarian law, which provides a narrow definition of what constitutes a legitimate target and permits aiming attacks only at targets that effectively assist military efforts, when damaging them can provide a military advantage. Treating these homes as legitimate targets is an unlawful, distorted interpretation of the concept, resulting in harm to civilians, whom this body of law is intended to protect…. Even if uninvolved civilians are not injured, these houses are not legitimate military targets, and attacking them is a violation of international humanitarian law. The gravity of the violation is compounded when uninvolved civilians are injured.”

B’Tselem gives immunity to the “family homes” of Palestinian terrorists

According to B’Tselem, as can be learned from the above-mentioned statements, the “family homes” of terrorists operating in the Gaza Strip are immune from attack regardless the seniority of the operatives, whether they are high-ranked commanders or junior operatives, and regardless of their organizational affiliation, meaning this rule applies also on operatives of al-Qaeda proxies in Gaza.

B’Tselem adopts a premise that Palestinian terrorists generally do not use their family homes for terrorist activity, but only returning to their homes to relax from their “work” and to have a normal family life just as any other regular family.

B’Tselem ignores the modus operandi of the Palestinian terrorist organizations

However, B’Tselem does not explain what is the “military base” in which the al-Qassam commander or any other terrorist operative in Gaza is positioned. B’Tselem also does not elaborate how Hamas operates the command and control centres, and does not provide any details on the locations of Hamas headquarters, brigades, battalions, war rooms, deployment areas, ammunition and supply bases, communications centres and the other units of al-Qassam Brigades as well as other terrorist organizations.

Many of al-Qassam’s operatives and commanders are employed by the Palestinian government and positioned in the security and Intelligence apparatuses (according B’Tselem, these governmental institutions are also not legitimate targets). With the start of the current conflict, and like previous cycles of violence, the Palestinian Ministry of Interior ordered the evacuation of all headquarters of the security and Intelligence forces fearing Israeli air strikes.

Past experience, Israeli Intelligence reports and testimonies of operatives of Hamas and other terrorist organizations indicate that the command and control system is being operated from “family homes,” mosques, governmental institutions, etc., which serve as meeting and hideout places for Hamas operatives and commanders, weapons caches (from personal weapons to explosives and rockets), and shooting positions. During previous confrontations, Palestinian terrorist organizations turned “family homes” into military positions (even when families and uninvolved civilians continued to stay in place), booby-trapped them and planted explosive charges in the surrounding area.

B’Tselem, led by its new minted Executive Director, Hagai El-Ad, persistently chose to disregard the modus operandi of the Palestinian terrorist organizations and its implications, and instead saw fit to liken Israeli colonel who serves in the IDF to a commander of a terrorist organization, which operates within civilians and family homes.

During Jessica Montel’s tenure as Executive Director, B’Tselem presented a slightly different approach. On February 8, 2009, B’Tselem published “Guidelines for Israel’s Investigation into Operation Cast Lead” in which the following was written:[3]

“The extensive harm to the civilian population in the Gaza Strip does not, in itself, [constitute] a proof that the army acted in violation of international humanitarian law….”[This sentence appears only in the Hebrew version of B’Tselem special report.]

“It is permissible to direct attacks only against persons directly taking part in the hostilities or at military objects, which are limited to ‘those objects which by their nature, location, purpose or use make an effective contribution to military action,’ and ‘whose total or partial destruction, capture or neutralization, in the circumstances existing at the time, offers a definite military advantage.’

“Even when an attack is aimed at an object that meets all these requirements, it is obligatory to take certain precautionary means to ensure that the harm to civilians is as minimal as possible. Therefore, it is obligatory to choose means of attack that will minimize injury to civilians and to avoid attacks that may be expected to cause excessive damage to civilians in relation to the concrete and direct military advantage anticipated.

“It is undisputed that application of these principles in the Gaza Strip is complex, given that Gaza is one of the most densely populated areas on earth, and any error could be fatal. In addition, it appears that Hamas members systematically breached these principles. Indeed, it is not exact science and commanders in the field must make rapid decisions while often lacking full knowledge of the facts….

“When civilian objects are used for military purposes, they lose the protection afforded them by law. However, the burden of proof falls on Israel to show that Hamas was using a civilian object for military purposes…. Massive use of force does not necessarily indicate breach of the principle of proportionality, certainly when Hamas fighters are operating in a civilian area, booby-trapping houses, and hiding weapons in houses of civilians.

All in all, this case is adding to a long list of B’Tselem’s inaccurate, biased and even false reports, which were exposed by the undersigned on www.News1.co.il since 2006. It illustrates once again the poor reliability of the reports published by B’Tselem, which appears as a political organization that manipulatively uses the agenda of human rights to promote its political goals. 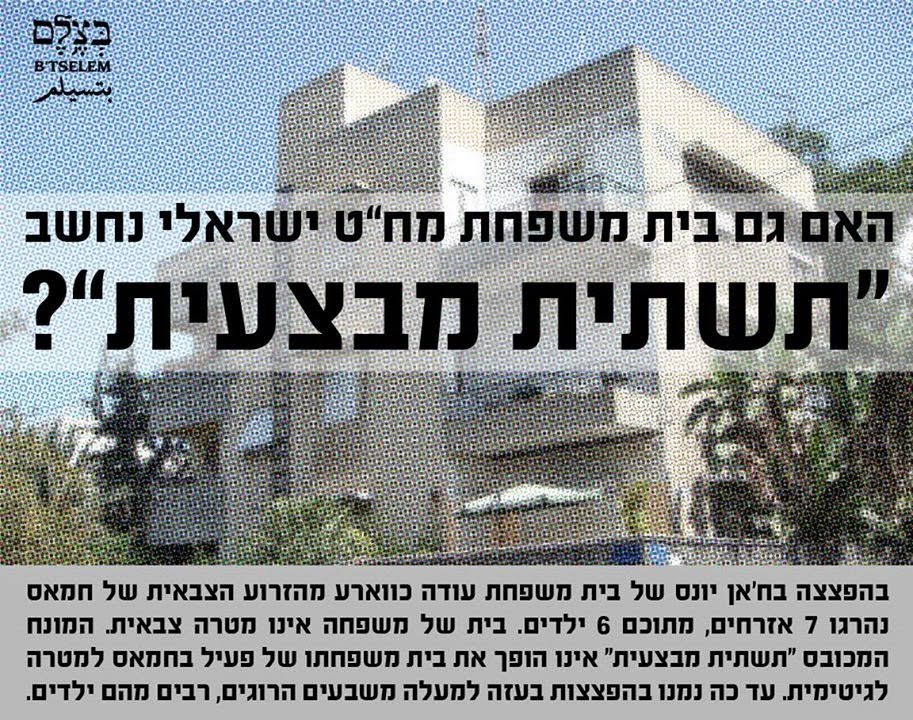